Forget ‘boring’ Kourtney, Travis brings out a wild side we never knew she had 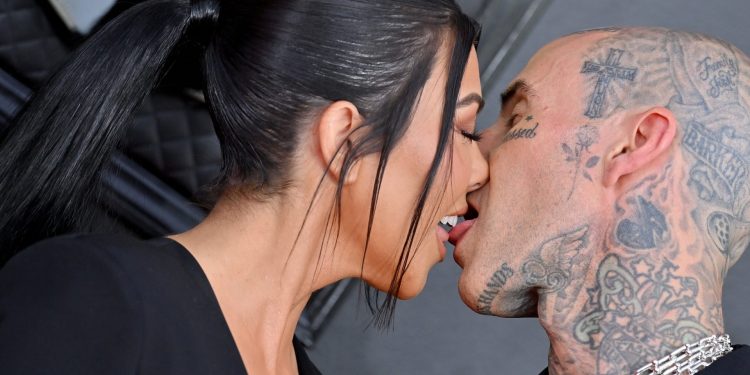 
Kourtney Kardashian just got fake married to Travis Barker in Las Vegas, something incredibly spontaneous for the sister everyone used to call ‘the boring one’.

After attending the Grammys at the MGM Grand Garden Arena, the pair walked into the One Love Wedding Chapel on the Sin City strip at around 1:30am on Monday night to wed.

They didn’t actually have a marriage license, but the loved-up couple, who had drank a little too much Tequila, had a “practice” wedding where they were officiated by none other than Elvis.

The whole affair is something the ‘old’ Kourtney (circa 2010 to 2020), who rarely ventured out of the house and lacked a little va-va-voom, never would have dreamed of doing.

She’s like a new woman, and it seems as though we have Travis Barker to thank for that. Let’s delve into her journey from boring to daring as Kourtney gives Kim a run for her money…

Kourtney used to be the ‘boring’ sister

If you’re an avid KUWTK watcher, you’ll remember the time when Kourtney was a little boring.

She was still utterly gorgeous, an amazing mother and a valued member of the Kardashian clan, but in the latter series of the E! reality show, she was definitely the least entertaining.

In Season 15, Kourtney’s very own sister Kim even said that she was “the least exciting to look at” before later clarifying that she meant she was “the most boring”.

This came after Kourtney refused to be part of the family’s annual Christmas card photo shoot unless it was done at a specific time that worked around her kids.

“I need Kourtney to not be so fu**ing annoying with a stick up her a** acting like she runs this sh*t, because she doesn’t. She’s the least exciting to look at,” Kim then told Khloe and Kris.

A few years later, in Season 18, Kourtney and Kim had another argument about the former’s work ethic which escalated into a physical fight that’s arguably one of the best scenes in KUWTK history.

Kim isn’t the only one that thought Kourtney was boring either, with fans quick to call out her attitude and blandness on Twitter.

In reality, her boringness actually stemmed far further back than Season 15. Fans were saying she was boring right back when she was dating Scott.

The most spontaneous thing they ever did was almost get hitched in Vegas, which is a little ironic after this week’s events with Travis. However, Kourtney pulled out last minute and they never made it down the aisle.

Scott was always the one going out partying whilst Kourtney was far more reserved and preferred to stay at home. That was her choice of course, but fans didn’t think it made great KUWTK viewing.

The Kourtney we’re seeing in 2022 is like a new woman. Who is she? Travis’ fiance, that’s who. It turns out she wasn’t boring after all, she clearly just wasn’t happy with Scott Disick all along.

Ever since she’s been dating Travis, Kourtney is wild, daring and quite frankly, beaming from ear to ear. We all loved Kourtney and Scott and secretly wanted them to work things out, but it clearly wasn’t meant to be.

Now, Kourtney’s snogging Travis on every red carpet, including a full on PDA at the Grammy’s and passionate bathroom kiss alongside Megan Fox and Machine Gun Kelly at the VMAs.

It was clear that Kourtney had changed when she got engaged to Travis after just nine months of dating. The old Kourtney never would have done something so impulsive.

The Blink-182 drummer brings out a wild side of Kourtney that no one has ever seen before, and we hope she’s here to stay. We’re #TeamKravis all the way!

In other news, No, Joe Rogan is not dead: Cruel hoax takes over Twitter