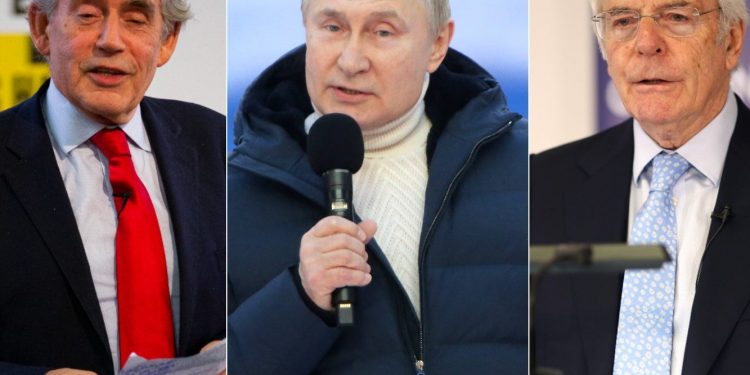 Two former UK prime ministers have led a call for a new international tribunal to be set up to investigate Russian President Vladimir Putin and his allies for their actions in the Russian invasion of Ukraine, BBC News reported.

Former prime ministers Gordon Brown and Sir John Major have pledged their support for the creation of a special forum modeled on the Nuremberg trials, according to The Guardian.

The Nuremberg trials saw the most notorious Nazi war criminals tried for the crime of aggression after World War II.

The International Criminal Court (ICC) is currently investigating Putin for war crimes but cannot pursue charges of aggression without the approval of the UN security council. Russia, a permanent member of the council, could veto this.

Brown, writing in the Daily Mail, argued that this “loophole in international law” must be closed so that Putin cannot “dodge” accountability.

In the article, Brown called for the arrest and trial of Putin. “And we must make Putin’s collaborators aware that the noose is tightening,” he added. “If they do not distance themselves from Putin, they face prosecution and prison.”

There are 140 signatories of the proposal, including Ukrainian foreign minister Dmytro Kuleba and 102-year-old Benjamin Ferencz, a former prosecutor of Nazi war criminals at the Nuremberg military tribunal.

A petition, also calling for the Nuremberg-style tribunal, had over 750,000 signatories at the time of reporting on Saturday morning.

On Wednesday afternoon, President Joe Biden delivered his harshest condemnation of Putin. “He is a war criminal,” Biden said to reporters, per Insider’s Jake Epstein and Erin Snodgrass.

While the formal investigation into war crimes is ongoing, growing evidence of targeted attacks on civilians is growing.

The United Nations human rights office (OHCHR) has said that at least 816 civilians were killed and 1,333 wounded in Ukraine through to March 17, per Al Jazeera. The targeting non-combatants can constitute a war crime, the OHCHR reiterated last week.