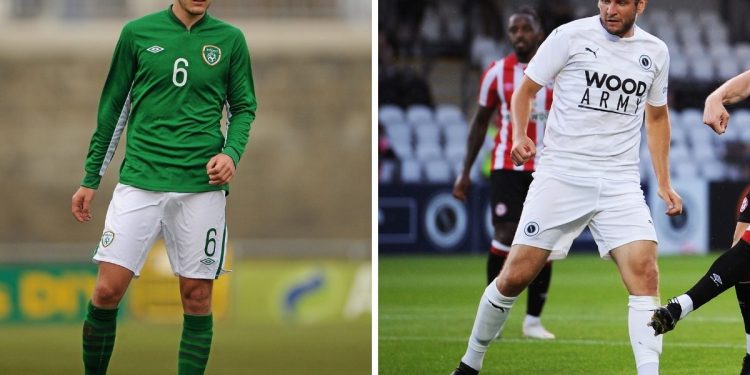 
CONNOR SMITH’S big break came on TV with Jose Mourinho, which led to some magic moments with Gianfranco Zola.

He hopes there are more tonight at the expense of another Chelsea old boy, Frank Lampard.

Former Ireland Under-21 midfielder Smith, 29, is part of the Boreham Wood squad that will take on Everton in the last 16 of the FA Cup on ITV this evening.

Having dumped out League One side AFC Wimbledon and Championship outfit Bournemouth in the last two rounds, the Premier League giants have been given fair warning.

And Boreham fans seem to believe a giant killing is incoming — judging by how Smith’s phone never stopped ringing during a Zoom interview with SunSport on Tuesday afternoon.

He told SunSport: “This is the academy office but the number is connected to the main desk. It normally gets answered after two rings but it never stops this week.

“We’ve got a special jersey for the game so it is fans calling to buy it or collect it. Or arranging coaches up. Or chancing their arm for tickets but there are none left. It’s good we have so many going up, but a shame for those who haven’t got them.”

Smith’s Irish family will be there, but three fans not going are Smith’s partner Chelsea — he jokes he should support them given the influence on his career and life — and two kids.

With the youngest only born two weeks ago, it was too much to travel to Merseyside for this evening’s game.

Instead, they will hope player-coach Smith — just back from an abductor muscle injury — will be seen on the small screen for Luke Garrard’s side.

He added: “During the injury, I was leaning more towards the coaching, helping the gaffer with sessions. He was asking my opinion a lot but it’s a bit tougher when I’m fit — I’d just pick myself every week!” And should he be called upon, the cameras will be nothing new to him, having started his career on television.

Smith — whose accent is a mix of Blanchardstown, Mullingar and England, having called all home at different stages — got his chance courtesy of Sky’s ‘Football’s Next Star’ as a 16-year-old with Mullingar Athletic.

“That Mullingar team had really good players. We played NDSL (North Dublin Schoolboy League) at first and, in our last season, we won 24 out of 24.

“Then we went DDSL (Dublin and District Schoolboy League) Premier, that’s the best league in the country with the best players.

“We had some good players who were easily as good as people in English academies. But they just preferred Gaelic and hurling so they’d miss games because it wasn’t their priority.

“It’s a shame but they had good careers, people like John Heslin and Shane Dempsey with Westmeath.

“I played Kennedy Cup for the NDSL with Brian Fenton, who’s had a good career with Dublin. He was a brilliant footballer as well as Gaelic footballer.

“I knew I was good enough as I was always one of the better players in every game. You don’t think you’re going to get a chance but I knew, if I did, I could have a good career.”

The Sky talent scouts liked what they saw and Smith spent five weeks at Inter Milan, where he finished as runner-up in the show. But it did earn him a deal with Watford.

Having met Mourinho, he joined the Hornets and worked under some other top managers. Smith added: “Malky Mackay was the manager, his assistant was Sean Dyche and the academy manager was Mark Warburton — so three managers who have had decent careers.

“Watford didn’t have much money so a lot of youth players were brought in. Malkay had me on the bench for Ipswich and Middlesbrough though I didn’t play.

“Sean Dyche gave me my pro deal but the Pozzos were buying the club and he was sacked.

“Then Gianfranco Zola came in. He was the best manager I ever played under. I did well in pre-season and he liked me and put me in the team. We made the play-offs that year.”

But there were injuries, loan moves and then a permanent departure for AFC Wimbledon, who he helped to League Two promotion in 2016.

He left the London area for Plymouth and Yeovil, which almost led to him quitting football aged 25.

Smith explained: “I just didn’t enjoy it. I’ve never been one to fall out with people but for whatever reason, me and the manager didn’t get on. I’ve no issue with that. I was just unhappy there and actually thought of quitting altogether.

“My other half Chelsea was there with me but she’s Watford-based, which is where I’d always been too. I went back for pre-season for my second year but I knew it was time. I just said, ‘Mutually cancel my contract, I don’t want a penny’. We wanted to be in Watford.

“It happened so quickly my agent didn’t have much time, I just said I wanted a club, I didn’t care about the level. So that day I signed for Boreham Wood and I’ve been in the National League ever since.

“We’re third in the league and have games in hand so promotion is the main aim. The chairman has been here 23 years and built the club that is ready for the league.

“The stadium is fantastic, the pitch is a million-pound pitch because Arsenal Ladies use it, we’ve got a 5G training pitch.

“That’s why before Saturday’s game with Eastleigh, we stressed that was the big game.

“Players can be forgiven for thinking, ‘Don’t get injured, then enjoy playing Everton’. So it was important we got the win.”