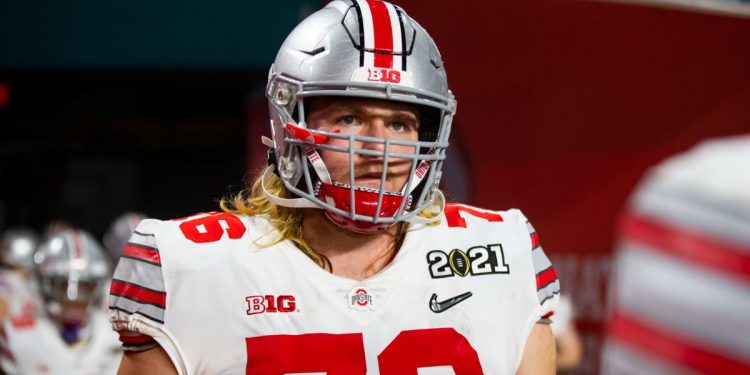 Editor’s note: If you or someone you know is having thoughts of suicide or is in emotional distress, contact the National Suicide Prevention Lifeline at 1-800-273-TALK(8255) or at suicidepreventionlifeline.org.

Former Ohio State offensive lineman Harry Miller revealed March 10 in a detailed Twitter post that he was retiring from football, citing mental health concerns after having suicidal thoughts. On Monday, Miller appeared on The Today Show and opened up further on his decision.

“I had no intention of this happening the way it did,” Miller said Monday. “People have called me brave, but to me, it just felt like not dying. It felt like being honest. Maybe bravery is just being honest when it would be easier not to, and if that’s bravery, then so be it.”

Miller began the Twitter post by chronicling a difficult conversation he had with Buckeyes coach Ryan Day prior to the start of last season, revealing that he told Day he planned take his own life. After being put into contact with mental-health professionals, he attempted to return to the field, but eventually realized he was better served stepping away from the game.

On Monday, Miller detailed that he had had suicidal thoughts since childhood, and that he had undergone treatment dating back to his youth.

“I guess I’ve always been anxious and depressed,” Miller said. “Years passed. I felt good in high school. Got to college, and it’s just sort of difficult. You’ve got these young people being thrust under these bright lights. As a student-athlete, you play a game, and perhaps you made a lot of mistakes, and people send you messages saying, ‘Transfer, you suck.’ Some people get death threats. … I’m trying to text my mom and that’s the first thing I see.”

Miller, a former five-star recruit, was a starter his sophomore year during the Buckeyes’ run to the 2020 CFP National Championship Game. He started in Ohio State’s Big Ten title win but he did not play in the CFP semifinal after testing positive for COVID-19. Miller came off the bench in the national championship game.

“While I was going through my therapy, I was seeing stories of Miss Americas and athletes all over the board, and I just kept thinking, ‘If somebody would just say something,’” Miller said. “And I’m just really grateful that I was able to receive the care and love and affection that I did so that I could.”

At the end of the segment, Miller looked to the camera to deliver a tearful message to those going through the same struggles he went through.

“When you’re preparing to not say words any more, you realize how important your words are, and even now, they feel so clumsy,” Miller said. “I would just say, hope is just pretending to believe in something until one day you don’t have to pretend anymore. Right now, you have all the logic, all the rationale in the world to give up on it. I would just ask to pretend for a little bit, and then one day you won’t have to pretend anymore and you’ll be happy.”