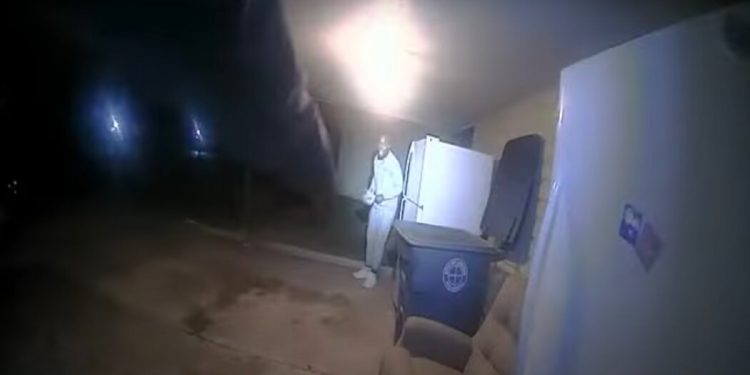 Two former police officers in Lawton, Okla., were charged with first-degree manslaughter Friday in the shooting of a Black man in December. In video footage released by the city on Friday, the man, Quadry Sanders, appeared to be complying with orders to put his hands up after he was initially shot, when he was repeatedly shot again.

The graphic body-camera video of the confrontation shows the officers Nathan Ronan and Robert Hinkle responding to a 911 call on Dec. 5, 2021, just after 8:30 p.m. about a man who was under a protective order entering the home of the person named in the order.

Lee Merritt, the family’s lawyer, said in a statement that Mr. Sanders had a dispute with a woman when the police were called.

Mr. Sanders, 29, was the person in violation of the protective order, according to a statement issued in December by the Lawton police chief, James T. Smith. The statement added that the caller reported that Mr. Sanders was waving a gun inside the house. Officers learned that Mr. Sanders was refusing to let one of the residents leave, according to a statement by the district attorney that was reported by the local news station KSWO.

The footage shows officers using a loudspeaker to alert Mr. Sanders of their presence. A woman exits the home. Mr. Sanders then emerges from a back door according to caption text in the video. Mr. Sanders complied with an officer’s commands to show his hands, according to the district attorney’s office, before running back inside.

When Mr. Sanders exits the house again, the officer wearing the body camera moves toward him, directing him to put his hands up and get down on the ground. (It was not immediately known whether the footage released by the city came from Officer Ronan’s body camera or Officer Hinkle’s.) The only object visible in his hands is a baseball cap, according to the district attorney’s statement. Mr. Sanders appears to try to move behind a refrigerator sitting outside. Just as he raises his hands above his head, one of the officers shoots at Mr. Sanders four times.

Mr. Sanders then falls to the ground, at which time an officer once again says, “Hands! Hands! Hands!”

Officers shout at Mr. Sanders to “stay down” and “roll over on your stomach.” Mr. Sanders, writhing, appears to say, “I’m down” and “I can’t breathe.”

The officers are then seen dragging Mr. Sanders’s limp body from the doorway, leaving a trail of blood on the driveway. They do not begin to treat his wounds for over two minutes after firing the final shots.

Mr. Sanders was taken to a hospital, where he was pronounced dead, according to the statement from the police chief.

“I can’t find a single redeemable factor that mitigates any aspect of this shooting,” Mr. Merritt wrote on Instagram. “It was just murder. There was no justification. These men must be prosecuted to the fullest extent of the law.”

Mr. Ronan and Mr. Hinkle were fired from the department on Jan. 7 after an internal investigation, which found that the officers’ actions “were not in conformance with the Lawton Police Department’s well-established training protocols, policies, practices, customs or procedures,” according to a statement from City Manager Michael Cleghorn in January. A separate criminal investigation was conducted by the Oklahoma State Bureau of Investigation, leading the Comanche County district attorney, Kyle Cabelka, to issue charges on Friday.

The former officers each posted bail at $25,000 on Friday. A hearing is set for Aug. 1. According to Oklahoma state sentencing guidelines, penalties for first-degree manslaughter include a minimum sentence of four years in prison.

Mr. Ronan was previously under investigation for the fatal shooting of another Black man, Zonterious Johnson, 24, in January 2021. That shooting occurred just three miles from where Mr. Sanders was shot in Lawton, a city of 90,000 a little over an hour southwest of Oklahoma City.

The district attorney’s office cleared Officer Ronan of any wrongdoing in April 2021 after an Oklahoma State Bureau of Investigation report, which found that Mr. Johnson had raised his gun despite Officer Ronan’s command to drop the weapon. Officer Ronan had pursued Mr. Johnson after he heard shots fired outside a local restaurant and saw Mr. Johnson standing in the street with his arm extended, and another person shooting at Mr. Johnson, according to a statement from the police chief.

The Lawton Police Department, District Attorney Cabelka and Mr. Hinkle could not be reached for comment. Mr. Ronan declined to comment.

“Although this decision and the releasing of information that followed may provide clarity to this tragic incident, it does not come without impacting one’s stages of grief and mourning of a lost loved one,” Stan Booker, the mayor of Lawton, said in a statement. “I believe the Lawton Police Department holds itself to the highest possible standards, and I know it will continue to do so moving forward.”