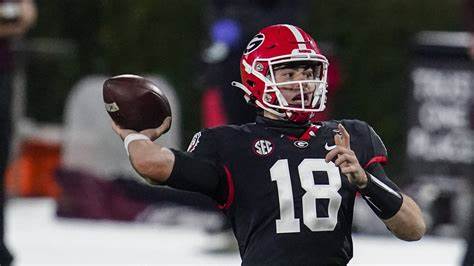 
MORGANTOWN — With the quarterback situation up in the air, former USC and Georgia QB JT Daniels is transferring to WVU, according to ESPN’s Pete Thamel, choosing the Mountaineers over Missouri and Oregon State.

Daniels, a former 5-star prospect, reunited with Graham Harrell, who served as his offensive coordinator at USC in 2019. Harrell now holds the same position with the Mountaineers.

Injuries have derailed Daniels’ time at his previous two stops. After being named the starting QB at USC in 2018, where he started 11 games as a true freshman, an ACL injury the following season forced him to the bench. Kedon Slovis, who is now projected to be the starter at Pitt, took over and played well, forcing Daniels to hit the transfer portal.

Daniels and Slovis could meet head-to-head Sept. 1 when the Backyard Brawl resumes at Heinz Field.

Daniels, at 6-foot-3 and 210 pounds, transferred to Georgia, but his recovery caused him to miss the early part of the 2020 season, but he did start the final four games, including a Peach Bowl victory over Cincinnati.

Finally getting the opportunity to start in 2021, Daniels was once again hampered by an injury, this time to his lat muscle. Stetson Bennett took over, and eventually led the Bulldogs to the national championship, leaving Daniels looking for a new home again.

Through four seasons, Daniels has amassed 4,840 yards passing and 32 touchdowns in 21 games.

He will be the fourth scholarship quarterback for WVU, with two years of eligibility remaining. Sophomore Garrett Greene, redshirt-freshman Goose Crowder and true freshman Nicco Marchiol are competing during spring camp.

The Mountaineers are looking for a new starting quarterback after Jarret Doege decided to transfer to Western Kentucky.