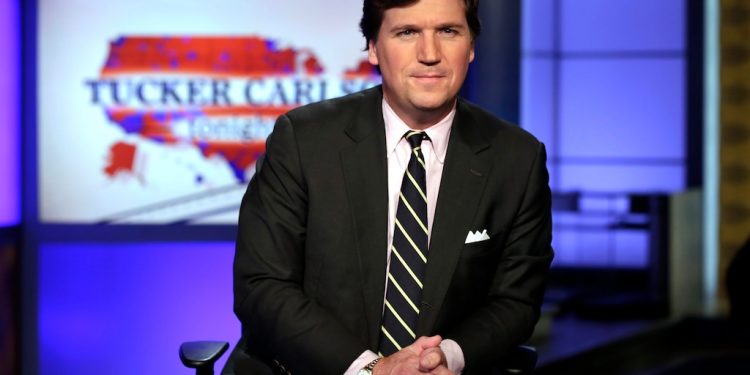 On Thursday night, Carlson backpedaled, recharacterizing what he had called a “border dispute” two days earlier as a conflict that “could become a world war.”

“It’s a tragedy, because war always is a tragedy, and the closer you get to it, the more horrifying it seems,” he said.

Carlson also shifted his tone on Putin. After Russian troops had invaded and were bombing Ukrainian cities, Carlson said of Putin: “He is to blame for what we’re seeing tonight in Ukraine.”

“Vladimir Putin started this war, so whatever the context of the decision that he made, he did it,” he said. “He fired the first shots.”

On Tuesday, Carlson had said that hating Putin had become “the central purpose of America’s foreign policy.”

“It might be worth asking yourself, since it is getting pretty serious, ‘What is this really about? Why do I hate Putin so much?’” he said. “‘Has Putin ever called me a racist? Has he threatened to get me fired for disagreeing with him?’”

Carlson’s Tuesday comments were criticized as “dangerous” by one lawmaker. Putin has jailed opposition candidates and been accused of poisoning dissidents on foreign soil even after they’ve spent years living abroad.

On Thursday, Carlson told his viewers Putin “clearly does deserve to be punished” for invading Ukraine.

In the hours preceding Carlson’s about-face, Russia’s military built on its initial attack, driving deeper into Ukraine and advancing toward major cities such as Kharkiv in the east and the capital, Kyiv, where a barrage of explosions forced some residents into subway stations for cover and sent others fleeing the area entirely, The Post reported.

The Russians “have every intention of basically decapitating the government and installing their own method of governance,” a senior defense official told The Post, speaking on the condition of anonymity to discuss sensitive intelligence.

Even though Carlson said on Thursday night that “what Russia has done is awful,” he quickly pivoted from blaming Putin to considering what would happen in the future. He acknowledged the situation in Europe could get worse.

“We can say that Vladimir Putin is at fault for what happened last night. But then what?”

Carlson added: “Once conflict starts, especially when that conflict is televised, it’s really hard to know what happens next. So, anyone who thinks the invasion of Ukraine couldn’t become a world war either lacks imagination or is lying to you. It certainly could become a world war.”

Timothy Bella contributed to this report.

Tyronn Lue isn't sure when Paul George will return to Clippers