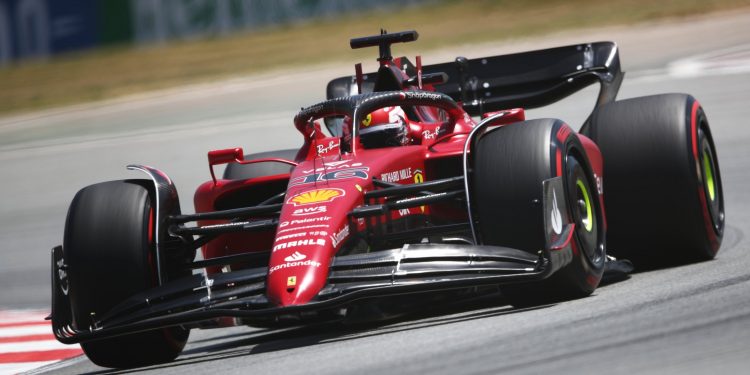 Charles Leclerc edged out championship rival Max Verstappen to lead the way in final practice for the Spanish Grand Prix, as Mercedes continued to show a newfound turn of pace.

Championship leader Leclerc clocked a 1m 19.772s at the Circuit de Barcelona-Catalunya on his low-fuel soft tyre run to end the 60-minute session less than a tenth of a second clear of Verstappen.

READ MORE: ‘I’m not lacking a lot’ – Sainz unconcerned by qualifying deficit to Leclerc so far in 2022

The Silver Arrows brought a raft of upgrades to Spain – and they appear to have found a solution to eradicate porpoising, which in turn has made them significantly more competitive on the straights.

Home favourite Carlos Sainz was fifth, ahead of Sergio Perez, with the top six running two sets of soft tyres and separated by under half a second on what was an unseasonably hot day in Barcelona.

Lando Norris, who was running the full upgrade after his McLaren team completed repairs to his floor damaged on a kerb on Friday, was seventh, with Kevin Magniussen the leading Haas in eighth.

WATCH: The key upgrades that have got everyone talking in Spain – including Aston Martin’s dramatically updated AMR22

Fernando Alonso, driving in front of a huge home crowd, was 13th, ahead of Alfa Romeo’s Zhou Guanyu and Yuki Tsunoda in the AlphaTauri. Lance Stroll was 0.5s behind team mate Vettel in 16th with Alex Albon the leading Williams in 17th, nearly a second clear of team mate Nicholas Latifi.

Mick Schumacher’s session ended prematurely after a brake fire (above), the German clocking just four laps in his Haas, who are the only team not to bring an upgrade to Spain. The team are undergoing a precautionary gearbox change and aim to have Schumacher out in time for qualifying at 1600 local time.

Pierre Gasly failed to set a lap time, with his AlphaTauri team discovering an issue on his car after his installation lap that couldn’t be fixed before the session was over.