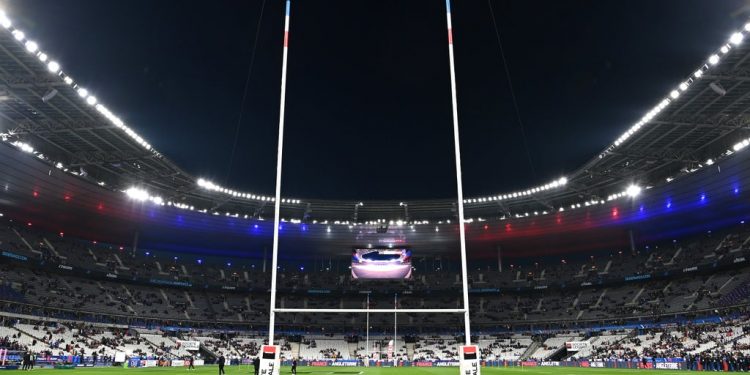 Follow live coverage as France host England in the finale of the Six Nations in Paris.

History beckons for Fabien Galthie’s side as they look to claim a Grand Slam and a first championship title since 2010. Their team selection has shown remarkable continuity throughout the tournament with 11 players starting all five matches, with all but one of the changes made in the tournament enforced by Covid. Damian Penaud returns on the right wing in the only switch from the 13-9 victory over Wales in round four.

England have sprung a surprise in their bid to deny their hosts by naming Freddie Steward on the wing and George Furbank at full-back. The other change to the backline sees Ben Youngs, England’s most capped player, replace Harry Randall at scrum-half where he will partner fly-half Marcus Smith. There are three new faces in the pack with Will Stuart, Nick Isiekwe and Sam Underhill coming in.

Follow all the latest updates and analysis from the Stade de France:

How the table sits with one game left

France will be hoping that they will not require a huge impact from their bench, but this is a unit prepared to add plenty of second-half punch if needed. Replicating the strategy used by South Africa during the World Cup, Fabien Galthie has a second set of tight five forwards who are all similar to the players in the starting XV they will replace.

It’s been a wretched tournament for England in the final quarter of games, ceding the lead in defeat to Scotland, failing to ignite against Italy, nearly allowing Wales to storm back, and then, having fought valiantly, letting Ireland power away last time out. This is the fittest French side of recent memory, aided by a pre-Six Nations training camp alongside the French Foreign Legion – if things are close come the 60-minute mark then that could make the difference.

Can I Kick It?

Barring a rather large surprise, expect this to be a kick-heavy Crunch. France kick more than any team in the competition and the indication is that England intend to match them, having seen the success of Wales’ shrewd strategy with the boot in Cardiff last Friday.

There is a thought that France’s back three might be vulnerable under the high ball: Damian Penaud is a converted centre, Gabin Villiere an ex-Sevens start and late developer, and Melvyn Jaminet hasn’t looked entirely secure aerially during his first Six Nations. With Freddie Steward on the wing and Ben Youngs at scrum-half, England are ready to provide a stiff challenge.

Making more radical alterations is Eddie Jones. It must be said that England have suffered some real injury misfortune during this tournament, with Tom Curry the latest to drop out having torn a hamstring – the flanker is expected to miss up to ten weeks.

The availability of a fit-again Sam Underhill is thus timely, with the fellow Kamikaze Kid a straight swap at openside flanker for Curry. Kyle Sinckler has barely trained in the last two weeks, first due to a back issue and then while going through return-to-play protocols, so Will Stuart is handed the biggest test, and opportunity, of his career so far, starting at tighthead. Nick Isiekwe’s extra lineout spring gets him the second row nod alongside Maro Itoje with the set-piece again a vital battleground.

The backline is also picked with aerial challenges in mind. Ben Youngs returns to the starting side for the first time since Round One with a heavy kicking remit, while Freddie Steward is pushed out to the wing to allow George Furbank to come into the side. The Northampton full-back starts his first game at 15 for England since Round Two in 2020 with England looking to match France with the boot.

Of note on the bench: Jamie Blamire’s Six Nations contribution will amount to one lost lineout in the final minute at Twickenham last week, with Nic Dolly the preferred Paris back-up for Jamie George; Ollie Chessum is the lock/six cover with similarly long limbs to the starting trio ready to disrupt French ball if required.

One of the hallmarks of this French side is how settled it is. While Fabien Galthie has had to deal with plenty of Covid and injury disruption this tournament, the France head coach has made just a single change for tactical reasons during the campaign, and again only makes subtle, logical alterations to the team that won in Cardiff.

Damian Penaud is back available having recovered from Covid, and is a straight swap on the right wing for the injured Yoram Moefana, who has filled in well wherever needed during this tournament. Otherwise, it is as you were from the start for France.

Also out of isolation is Romain Taofifenua, whose return enables Galthie to revert to his favoured six forwards, two backs bench split and again ready an entirely new front five among his substitutes to make an impact come the second half. Mohamed Haouas again gets the nod ahead of Demba Bamba as the replacement tighthead.

Here we are then. Just one game remains in the 2022 Men’s Six Nations, a wounded England in Paris for Le Crunch as France go in search of Le Grand Chelem. The French capital has been bouncing this evening, with plenty of travelling England supporters drowned out by an expectant home crowd. The Stade de France is ready, so let’s get going.

Thank you for joining me for Ireland’s bonus-point win over Scotland.

I’m handing over now to Harry who will run you through the title decider: France vs England.

What a game we have coming up!