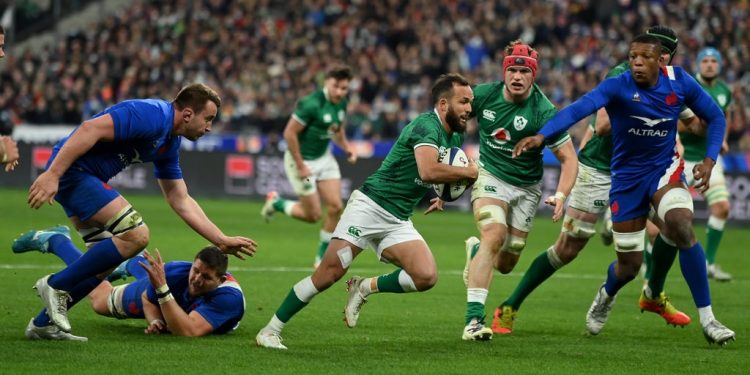 France tune-up for Ireland in battle of Six Nations favourites

Follow live coverage as France host Ireland in what could be the game of the Six Nations so far.

Saturday evening’s mouth-watering Stade de France clash is already being touted as a potential title decider, with both sides in form and producing free-flowing rugby. Fabien Galthie’s side started slowly but got the result they wanted last weekend with a bonus-point win over Italy in their opener. Andy Farrell’s team made a statement of intent in their first game, thrashing last year’s champions Wales in Dublin.

Les Bleus have made two changes to their starting XV with centre Yoram Moefana making his maiden championship start in place of the injured Jonathan Danty, while Francois Cros replaces Dylan Cretin in the back row. Ireland are seeking a 10th consecutive win but will have to do it without Johnny Sexton after the fly-half pulled a hamstring strain in training this week. Munster’s Joey Carbery will deputise in the number 10 jersey. Follow the latest score and updates from Paris, following the conclusion of Wales vs Scotland:

Joey Carbery steps up and sends the ball on a safe flight between the posts. It’s another Six Nations nail-biter.

Are France just starting to tire? The line speed seems to have dropped off slightly, though they continue to populate the ruck with bodies whenever they sniff an opportunity to counter-ruck.

Here they come. Thibaud Flament looses his footing and lands on the ball – off feet. Ireland penalty, and eminently kickable.

Gregory Alldritt stands upright in the tackle and offloads to Francois Cros, who nearly fires Gabin Villiere for the line like an arrow, drawing back his bow but not quite finding the onrushing wing with his pass.

Ireland back in possession and back on the attack. They have numbers on the left but France’s two defenders rush up to force a hurried pass, which hits the deck. Damian Penaud fly-hacks ahead. Ireland get bodies back to prevent him retreiving it.

Is that a 50:22 from Tadhg Beirne? It is! What a kick from the lock, who is now stationed on the flank! France charge down the first kick from Ireland and it skews to Beirne, who pivots just inside his own half and thumps a left-footed kick in behind. He is such a skillful player, but that is a thing of territory-gaining beauty.

But Ireland’s lineout is stolen! France survive and clear.

The volume of the crowd at the Stade de France seems to have dropped just a little, readying themselves for the final fifteen minutes. Ireland force an error from Antoine Dupont at the base to win the ball back on halfway.

Six points in it at the Stade de France

France come in at the side of the maul. Penalty to Ireland.

It isn’t! There is no clear change of line from Beirne, who is turning to chase after the ball as he holds his ground. It’ll just be an Irish lineout.

The game has begun to open up again. For the first time all day, really, Ireland’s set-piece strike move presents itself perfectly, and Mack Hansen nearly scythes through on the outside.

But France win the ball back, and play to the right. Antoine Dupont chips over the top of Tadhg Beirne and hits the deck after running into Beirne’s rump. Is that a block?

Steam Next Fest February 2022 Edition kicks off on the 21st

Steam Next Fest February 2022 Edition kicks off on the 21st