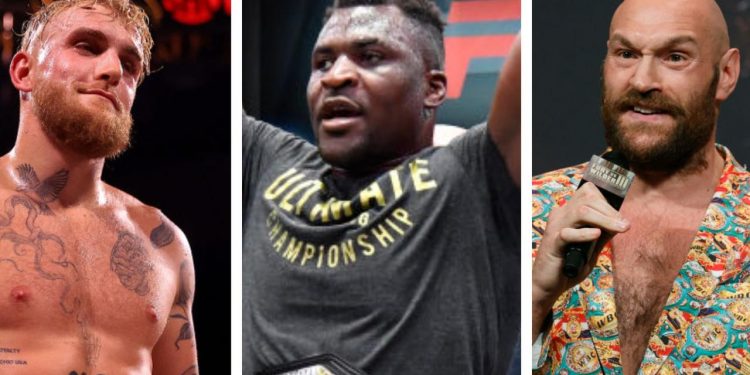 
Francis Ngannou has been urged by Tyson Fury to make the switch to boxing and ‘come see the Gypsy King’ as the UFC Heavyweight Champion ponders his next career move.

Ngannou’s win over Ciryl Gane at UFC 270 — pocketing him $USD600,000 — marked the last fight on his current deal with the company.

It comes as the Cameroonian star has been at loggerheads with the UFC recently, revealing he’s no longer willing to fight for $500,000 or $600,000 and wanted a boring crossover built into his next contract.

Adding to the dispute was UFC boss Dana White twice snubbing Ngannou after beating Gane, not presenting him the title then skipping the post-fight press conference.

And Fury, who reportedly earned $USD27 million for his trilogy fight against Deontay Wilder last year, called for Ngannou to get in the boxing ring with him for a lucrative crossover fight.

Meanwhile, Youtuber-turned-boxing star Jake Paul, who’s estimated to have made $USD30 million from his three fights in 2021, has ripped the UFC and called for White to ‘pay fighters more’.

In contrast, all fighters from UFC 270 were reportedly paid out $USD1.8 million in total, some $USD48.2 million ($A66m) less than Fury and Paul made together from their respective bouts.

UFC fighters aren’t allowed to fight outside the promotion unless given a special exemption, making the 35-year old’s Ngannou’s next move fascinating.

‘The Predator’ at the UFC 270 press conference again reiterated his future was up in the air.

“It’s been a long time I’ve been wondering about my future in the company. So nothing has changed. I’m still in the same position,” he said.

“I’ve been going to the UFC a lot so I’d kind of like exhausted all my options.”