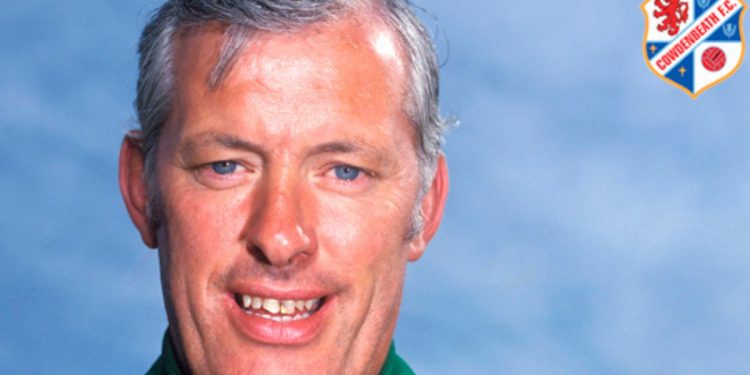 TRIBUTES have been paid to Frank Connor, the former Cowdenbeath manager, who has died after a short illness.

Blantyre-born Frank joined Celtic as a goalkeeper in 1960 but only ever made eight appearances for them.

He then appeared for Portadown, Derry City, St Mirren, and Albion Rovers. Brought from Alloa to Cowden as coach, along with manager Dan McLindon, Frank succeeded him as manager at Central Park in late 1975.

It was Frank’s first managerial post and it was at Central Park that he first showed the qualities which marked him out as a born football boss.

Frank was one of the game’s great characters and enthusiasts and was a popular figure at Central Park. He took over a Blues squad which was full of veterans and took the decision to change things completely.

He brought in young players like defender Bobby Aitken and midfielders Brian Purdie and David Fair, along with several other promising young players and it led to the team greatly improving results.

He however, left Cowden for his first love Celtic, in 1977, when he was appointed coach. Subsequently he managed Berwick and Raith Rovers where he enjoyed success, and then was assistant manager of Hearts, Motherwell, Morton and Celtic. Many favoured him to succeed Liam Brady at Celtic when he was acting manager for a spell before the appointment of Lou Macari. Later his guiding voice was heard at Ayr United and even on the sidelines of the East of Scotland League.

Times football writer Jim Stark recalled that Frank was the first manager he worked with at Central Park and commented: “Frank’s enthusiasm was unbelievable and this saw a huge improvement in the team with the youngsters he brought in making the side a real competitive force in the Second Division.

“As a young journalist I found him an amazing help in putting together reports on the previous match and then the preview articles of the following week’s game. “He was the sort of man who you could call at any time of day to get a comment, a real gentleman”.

Ex-Cowden manager Paddy Wilson recalled Frank as follows: “My last season as a player was 1975/76 and Frank had signed me for Cowdenbeath by then.

“Frank was different class and an in your face sort of guy. Sometimes I would say to him, ‘Frank you’re gein me a sair heid’.

“He was really a gem of a guy. I played in one match for Cowden when Frank turned out in an emergency in goal aged 40. It was at Alloa and his shoulder popped out the first time he went to get the ball and he had to go off.

“Then I became his assistant. His pal was Billy Simpson and I remember when big Billy blasted a 30 yard equaliser into the net at East End Park in the very last minute. Frank ran onto the pitch to celebrate and fell all his length in the mud in his new raincoat!”

And Sir Alex Ferguson still remembers when he brought his St Mirren side to Central Park for a Scottish Cup tie and saw them lose 3-0 to Cowden.

Sir Alex Ferguson said: “The Cowdenbeath manager, Frank Connor, used to sit on a bench on the side of the track.

“We send condolences on behalf of Cowdenbeath FC and all our fans to Frank’s family and friends.

Grey’s Anatomy Writer Who Wrote Episodes Based On Her IRL Health Issues MADE IT ALL UP?!

The hidden costs of the shift to digital healthcare

The hidden costs of the shift to digital healthcare