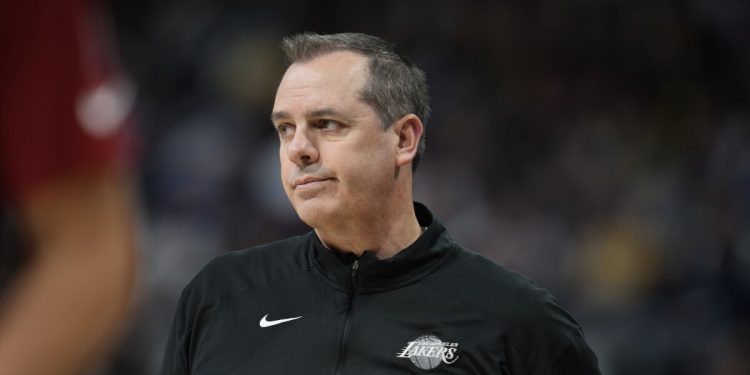 It’s over, even if the Lakers and coach Frank Vogel fought to keep it alive a little longer, and now the quest for formally finding out why can begin.

Anthony Davis and Carmelo Anthony, speaking before the Lakers’ regular-season finale Sunday night, said there was more than enough blame to go around for a team that transformed from contender to 49-game loser in the span of a season.

In their final game of the season, the Lakers put together a miraculous comeback thanks to Austin Reaves in a 146-141 overtime victory. With the win, the Lakers (33-49) ended the season on a two-game winning streak, the first time the team had won back-to-back games since Jan. 7. The Nuggets finished 48-34 and will head to the playoffs as the sixth seed in the Western Conference. They will face No.3 seed Golden State in the first round.

Reaves finished with his first career triple-double with 31 points, 16 rebounds and 10 assists — all career highs. Malik Monk also set a career high with 41 points, two of the Lakers’ few bright spots coming up big in the team’s finale.

Rookie Mac McClung, playing in his first game with the Lakers this season, punctuated the season with a two-handed reverse slam — a rare feel-good moment.

What accountability looks like moving forward is all that’s left for these Lakers, with the team failing to make the postseason for the seventh time in the last nine seasons. Attention has been on Vogel since midway through the season, the coach narrowly escaping instances in which it seemed as if a change were a strong possibility.

On Sunday, Vogel used his 41st starting lineup of the season, a statistic, as much as any, that showed he was searching for answers to the Lakers’ problems that never came.

“It’s imperfect, but that’s just the nature of our season. Having guys in and out of the lineup all year long, and we had 11 new players that basically had to audition for a starting job,” Vogel said before the game. “And when we lost as much as we had, no one earned it on a regular basis. So it was just the nature of the struggles we had this season. Ideally, you can land on something sooner than that.

“But that wasn’t an option for us.”

After the game, when told that ESPN was reporting that the Lakers had decided to fire him, Vogel responded: “I haven’t been told s—.”

The Lakers closed the season with LeBron James back in Los Angeles, where he received an MRI exam on his injured left ankle. Russell Westbrook, Dwight Howard, Davis and Anthony all were on the bench in Denver but didn’t play. And, in one last reminder of how the season went, Talen Horton-Tucker suffered an injured ankle in the first half and didn’t finish the game.

“I feel like he’s kind of, hasn’t had a chance to, especially the last two years, coach his team. With the injuries, not just myself, but overall,” Davis said of Vogel. “But the first year was great. We were able to win a championship. He [came] in a defensive-minded coach and put in his schemes that made us … top five defensively the last two out of three years, so it’s been good. The tough thing about this year, just haven’t been able to, just like last year, he hasn’t been able to coach his full team.

“But Frank is one of the — I’ve only had three coaches, can’t say top three — but he’s one of my favorite. … He knows what he’s doing. He goes to war for his players and he wants to win, so just unfortunate that he hasn’t had his team the last couple of years and especially this year.”

Davis and Anthony, speaking ahead of Monday’s scheduled exit interviews, reiterated feelings that injuries kept the Lakers from reaching their peak, though both acknowledged struggles even when the team was at full health.

Still, Davis was defiant, saying he still believed he and James could be the anchors of a championship team.

In addition to Vogel, plenty of blame has been aimed at Westbrook, who struggled for most of the season before finding a rhythm in his final 10 games of the season. And Davis said he didn’t believe it was all fair.

Cressida Dick’s Legacy Has Been Torn In Two