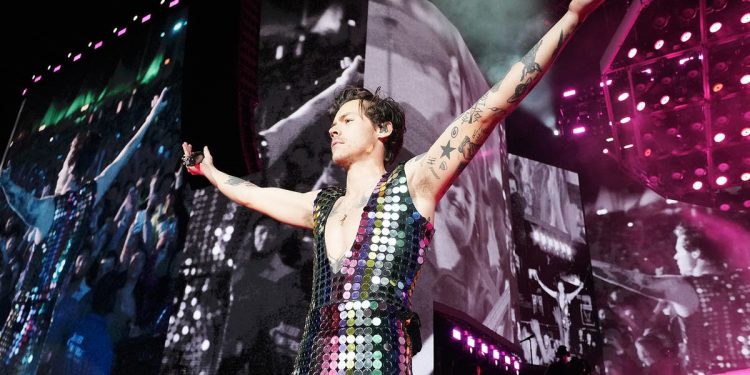 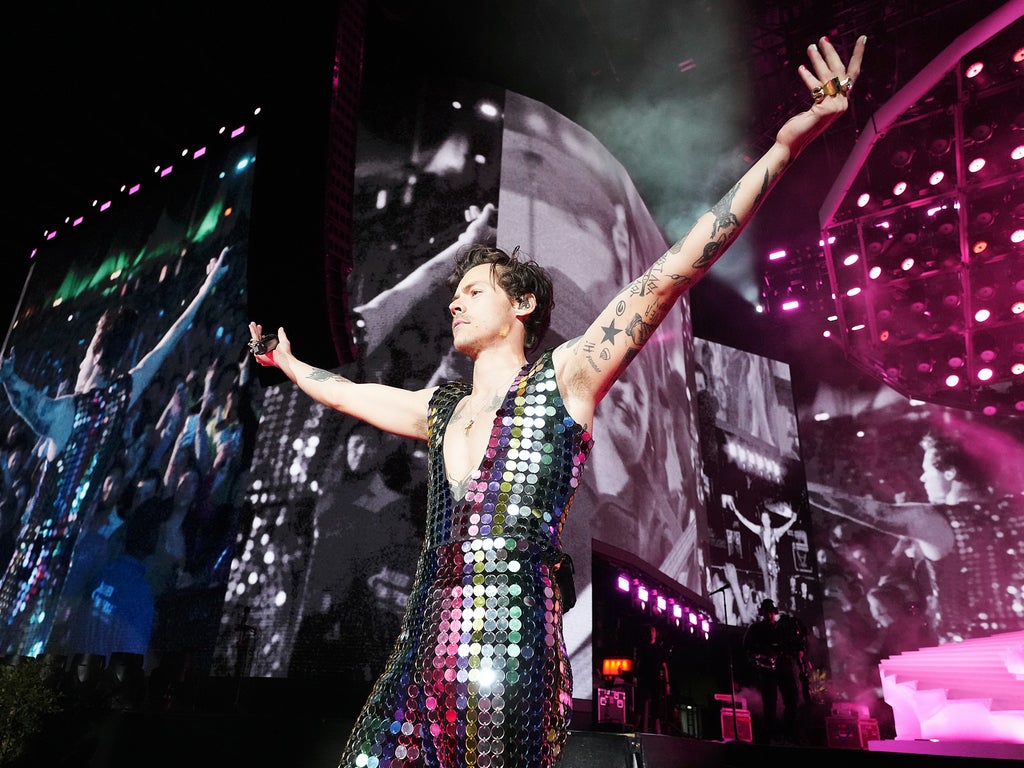 Harry Styles has earned high praise from fans for his eccentric looks at Coachella, with some comparing his style to that of late rock icon Freddie Mercury.

The former One Direction member has taken to the Coachella stage twice this year, bringing out Shania Twain during his performance last weekend, and surprising fans with an appearance from Lizzo on Friday.

His outfits have stayed true to his signature bold style, and have included a chest-baring sequined jumpsuit, metallic pink trousers and an oversized feather coat.

For his headline set on April 15, which drew a crowd of an estimated 100,000 people according to Varietythe singer arrived on stage in a giant black fur coat, worn over a custom-made fully sequined Gucci jumpsuit.

The sleeveless jumpsuit – which featured a deep plunging neckline that revealed Styles’ countless tattoos on his arms and chest – is a similar style to the red, albeit less sequined design he wears in the “As It Was” video, the debut single from his upcoming album Harry’s House.

He returned to the stage on Friday, opting for a striking Gucci ensemble. Styles wore metallic pink trousers, which featured a silver belt and his initials, H and S, on each of the back pockets.

He paired the bottoms with a matching pink and silver cowboy jacket, worn over a waistcoat adorned with crystal strawberry and cherry motifs. He also accessorised with a pink cowboy hat.

Styles was joined on stage by Lizzo for a rendition of Gloria Gaynor‘s “I Will Survive”, with both singers donning huge feather Gucci coats for the occasion – Harry’s was a shade of bubblegum pink, and Lizzo’s was bright orange.

Styles’ decision to wear Gucci on both weekends is unsurprising given his past campaigns for the Italian label. He also attended the 2019 Met Gala with the brand’s creative director, Alessandro Michele.

The looks have been praised by fans on social media, with many creating side-by-side collages comparing Styles’ appearance to Mercury’s flamboyant on-stage style.

“RIP Freddie Mercury, you would have loved Harry Styles at Coachella,” one tweet which has received more than 28,000 likes said.

Another said: “Harry Styles is this generation’s Freddie Mercury.”

Others believe Styles’ rainbow sequined jumpsuit will go down in fashion history.

“[Harry] you are SUCH a role model for all the little future fashionistas!” one person said.

“That rainbow jumpsuit was just another step towards freedom of self-expression for all. Keep shining on you crazy diamond, the next generation is watching!”

Styles has long been lauded for his playful approach when it comes to non-gendered dressing, famously wearing a Gucci dress on the cover of Vogue in December 2020.

At the time, he told the magazine that he believes the “barriers” between what is considered men’s clothing and women’s clothing are “crumbling away”.

“Clothes are there to have fun with and experiment with and play with,” he said.

“Once you remove any barriers, obviously you open up the arena in which you can play. I’ll go in shops sometimes, and I just find myself looking at the women’s clothes thinking they’re amazing.

“Now I’ll put on something that feels really flamboyant, and I don’t feel crazy wearing it. I think if you get something that you feel amazing in, it’s like a superhero outfit.”