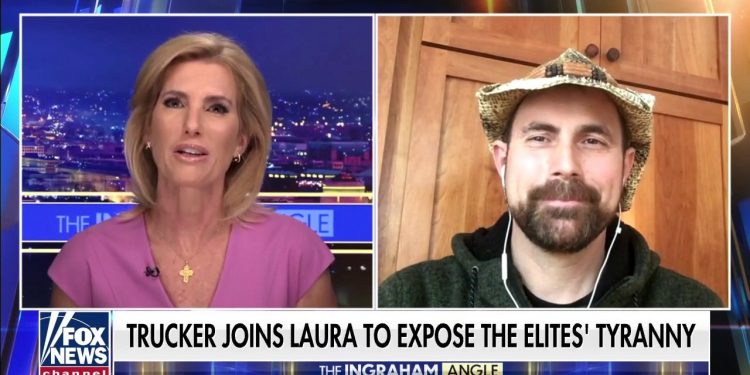 “And I think that belies the fact that they do see that we have incredible leverage,” he said, noting the Ambassador Bridge blockade and delays on the Blue Water Bridge.

Automotive plants are short on parts due to the truckers’ resistance.

“All across the economy, we’re affecting it, and that is what they’re afraid of,” he continued. “They’re afraid of a legitimate, spontaneously organized workers’ uprising that has more power than they do.”

Magill said no politicians have spoken with convoy organizers, to his dismay.

“Where’s the discussion, where [are] the negotiations?”

“You’re illegitimate and they think you’re terrorists,” Ingraham replied. “They’re not going to talk to you.”

Instead, the left smeared the convoy with two flag-bearers “out of 100,000 people” at a protest in Ottawa.

Magill shared that truckers established a community kitchen in downtown Ottawa, and ravers have planted sound systems on weekends.

“And people have come and danced because they’re so joyous because they want their freedom back and it’s a celebration. Yet, the media would have you believe that we’re basically Nazis. And it’s ridiculous, and so I had to say something about it.”

Ingraham revealed what threat the elites consider the convoy to be graver than.

“Anyone who is not in agreement with the elites on all these issues, whether it’s trade or whether it’s COVID mandates — if dissenters get together and actually enjoy themselves at a protest, peacefully, that’s a bigger threat to the elites than anything China will ever do,” she said. “The fear that they talk about — it’s their fear, fear of losing power.”

U.S. Says Russia Could Invade Ukraine at Any Time – The Wall Street Journal

What To Watch For In Zillow's First Post-iBuyer Earnings Report