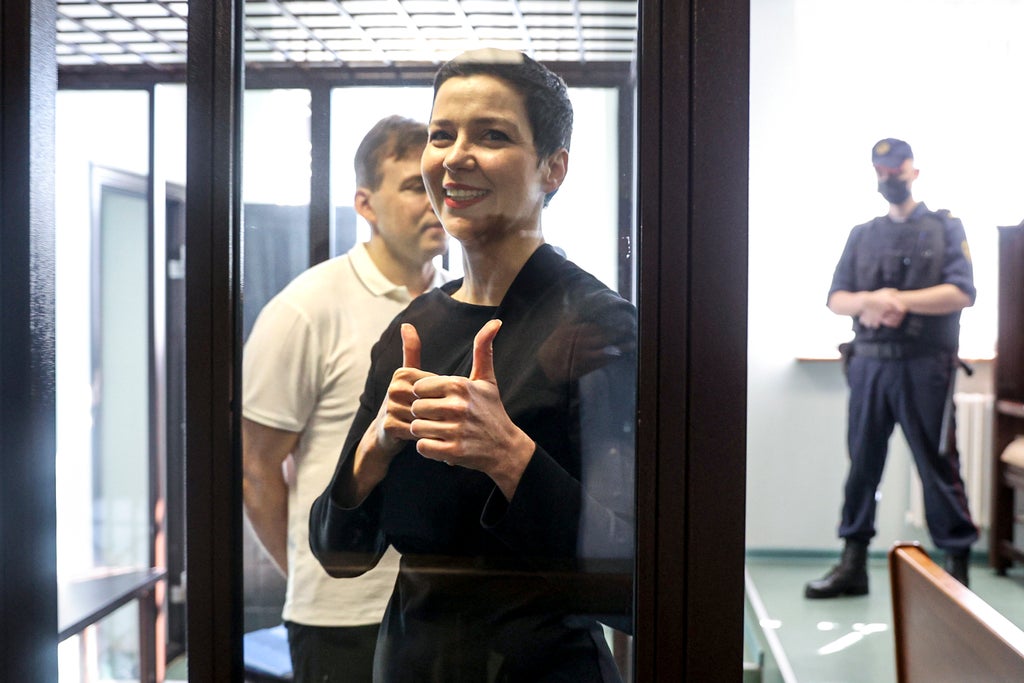 Leading members of the Belarusian opposition went on trial Wednesday, part of a multi-pronged crackdown on dissent in the ex-Soviet nation that was rocked by months of protests over a disputed presidential election.

Maria Kolesnikova a top member of the opposition Coordination Council, has been in custody since her arrest in September. She is accused of conspiring to seize power, creating an extremist organization and calling for actions damaging state security.

The trial of Kolesnikova and lawyer Maxim Znak, another leading member of the Coordination Council who faces the same charges, started Wednesday behind closed doors at the Minsk Regional Court in the Belarusian capital. They could face up to 12 years in prison if convicted.

Kolesnikova, who helped coordinate opposition protests that erupted after an August 2020 presidential vote, resisted authorities’ attempts to force her to leave the country. When officers of the Belarusian security agency drove her to the border with Ukraine in September to forcibly expel her, she ripped up her passport and walked back into Belarus to face arrest.

“Freedom is worth fighting for. Do not be afraid to be free,” she wrote in last year’s message from prison conveyed by her lawyer. “I do not regret anything and would do the same again.”

Just before the start of her trial, Kolesnikova said in a note from prison that authorities offered to release her from custody if she asks for a pardon and gives a repentant interview to state media. She insisted that she was innocent and rejected the offer.

Just as Kolesnikova and Znak went on trial, a Belarusian Olympic sprinter flew from Tokyo to Europe after resisting an attempt by her team’s officials to forcibly send her home to Belarus after a dispute over coaching. The 24-year-old runner Krystsina Tsimanouskaya said she could be in danger if she returns to her homeland.

Belarus was shaken by months of protests fueled by President Alexander Lukashenko s being awarded a sixth term after the August 2020 presidential vote that the opposition and the West denounced as a sham. He responded to the demonstrations with a massive crackdown that saw more than 35,000 people arrested and thousands beaten by police.

Authorities have ramped up their crackdown on dissent in recent weeks, targeting independent journalists and democracy activists in hundreds of raids.

On Wednesday, the Belarusian state security agency that still goes under its Soviet-era name KGB arrested Uladzimir Matskevich, a professor of philosophy who founded a top independent university, after raiding his apartment in Minsk.

Matskevich’s colleague, Tatsiana Vadalazhskaya, who was a member of the opposition Coordination Council, and Ulad Vialichka, the former head of EuroBelarus non-government organization, were also arrested following searches at their apartments.

On Tuesday, Vitaly Shishov, a Belarusian activist who ran a group in Ukraine helping Belarusians fleeing persecution, was found hanged in a park in the Ukrainian capital of Kyiv Ukrainian police have opened a probe to investigate whether it was a suicide or a murder made to look like suicide.

“Every Belarusian who could become a target for criminals because of political stance must receive special reliable protection,” Zelenskyy said.

Follow all AP stories on developments in Belarus at https://apnews.com/hub/Belarus.