Freetrade expands rapidly and launches in Europe: Can it be top dog?

In a bold move, he emptied his bank accounts to become the first investor in the commission-free share investing app outside of founder Adam Dodds’ family and friends. It was a risk that paid off.

Now Freetrade’s chief marketing officer, Nebehaj recently, alongside Dodds, has overseen the company’s seventh funding round raising on the very same platform he made his first investment.

It surpassed its £1million target in seven minutes. 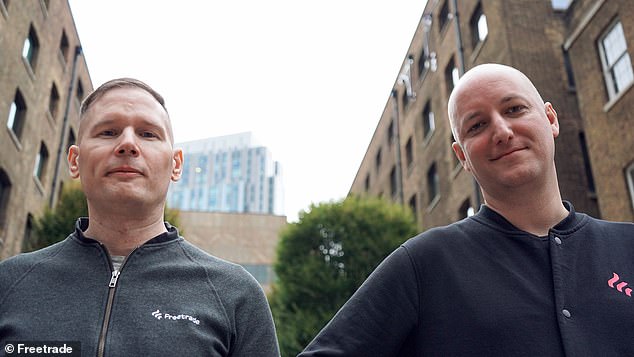 Viktor Nebehaj (left) was one of the first investors in Freetrade, founded by Adam Dodds (right)

A big advertisement push, not least its referral system which promises a free share worth up to £200, has seen Freetrade’s customer numbers surpass 1million and more than double its valuation from £270million to £650million in under a year.

It has attracted both a younger generation new to the world of investment and also older share investing hands tempted by the offer of free share-dealing.

That stands to contrast to established rivals who charge, including market leader Hargreaves Lansdown, where buying and selling shares costs £11.95 a time, and Interactive Investor, with its £7.99 dealing fee.

But how sustainable is Freetrade’s growth and just how different is the app from what’s offered by the old-school brokers? This is Money speaks to Viktor Nebehaj to find out.

‘I invested everything in Freetrade’

Freetrade is the brainchild of Canadian Adam Dodds, who moved to Britain after a stint in Asia.

In 2016, the former accountant spotted a gap in the investment market after deciding existing brokers were charging too high fees.

The concept resonated with Nebehaj, an early Google employee, who had moved to London after working in Ireland and across Asia.

I thought that having an investment account should be as normal as having a bank account. The US, which is typically a few years ahead, was already well on its way.

‘If you want any growth on your money you have to take some risk and look at other avenues,’ he says.

‘The US, which is typically a few years ahead, was already well on its way and I was really shocked that the UK was not already on its way.’

A keen investor himself, Nebehaj was involved in Monzo and Revolut’s first crowdfunding rounds.

‘But it’s all dwarfed by my investment in Freetrade… I looked across my various bank accounts in Ireland [and] in Hong Kong.

‘I got all the money I could withdraw and I put it all into Freetrade… It was a pretty crazy move. I was left with £15 in my bank account.’

Since then Freetrade has seen enormous success. It has become one of the most popular investment apps with 1.1million users and £1billion in client assets. 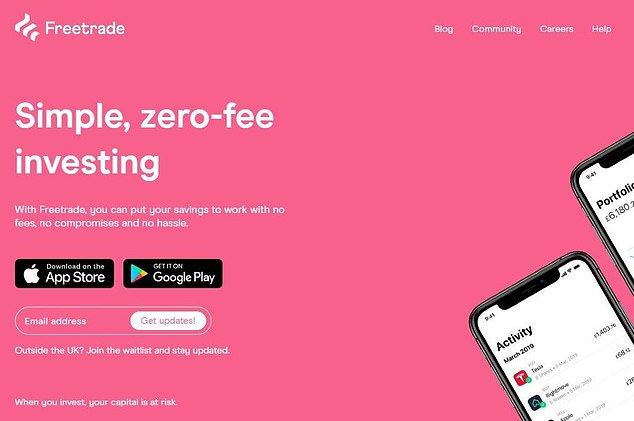 Easy to use: One of the selling points of Freetrade is the user-friendly app and interface

Freetrade has positioned itself as a disruptor in an industry dominated by big names like Hargreaves Lansdown and AJ Bell.

It has helped to drive interest in investment among younger people, not least because of its generous referral scheme. The median age of its users is 34 according to its latest pitch deck.

Since its launch in 2018, a wave of other commission-free apps have cropped up buoyed by the interest in investment during the pandemic.

And even AJ Bell seems to have conceded that the zero commission model has its merits, recently announcing its plans to launch its own investment app.

Dodl will offer fee-free share and fund dealing with an annual charge of 0.15 per cent, compared to the £3.50 maximum monthly charge on shares, trusts and ETFs on the AJ Bell Youinvest platform.

Nebehaj insists: ‘We are the originals – we had this insight five years ago that investing is going to be normal.’

Freetrade users can start investing in over 6,000 UK and US stocks and ETFs with no annual administration charges and free dealing, they can also open or transfer an Isa or Sipp, but these come with extra costs of £3 and £9.99 per month, respectively.

While there is no charge for buying shares under its standard plan, not all investments are included, in order to access a wider market, including smaller company shares, investors can sign up to Freetrade Plus, which costs £9.99 per month. If they do that they do not pay the £3 monthly Isa fee or can pay £7 per month for a Sipp.

Freetrade Plus also allows investors to earn 3 per cent on up to £4,000 of cash in accounts.

With 600,000 funded accounts, Freetrade is now the second largest broker on the London Stock Exchange by number of trades.

Its success has coincided with the growing interest in investment over the pandemic, but it remains one of the newer kids on the block.

The apps challenging the challengers

There is a new breed of DIY investor and the return of individual share picking.

Established platforms like Hargreaves Lansdown and AJ Bell have benefited from a growing number of investors, with both reporting record numbers since the start of the pandemic. Meanwhile, rival Interactive Investor is planning to join them by floating on the stock market itself.

Hot on their heels is a generation of new share trading apps which promise to ‘democratise’ the investment industry with low cost and sometimes free share dealing and the ability to invest for less in big US names by buying fractional shares.

Among this bunch, the already established eToro, Freetrade and Trading212 have all seen their popularity soar and are widely regarded as the chief challengers to more traditional DIY investing platforms.

But behind them is an even newer crop of platforms emerging that are looking to disrupt the industry even further. For these apps it’s not a question of making trading as cheap as possible, but harnessing tech to build wealth, offer something different, and challenge the challengers.

We look at how some of the new apps, Wombat, Circa5000, Plum and Lightyear, stack up against the more established players…

So can it keep its fees so low and make money? Nebehaj and Dodds seem to think so.

Where Freetrade differs from other platforms, Nebehaj says, is that it connects directly with the London Stock Exchange, cutting out the middleman and as a result, its costs.

Nebehaj says: ‘We decided to build our own brokerage system – it basically does the heavy lifting other brokerages do.

‘When it comes to new investment services typically they sit on top of a legacy provider or a different provider and they don’t build their own tech.

‘Our mentality is that you can’t sustainably create a business that makes things a lot cheaper without going really deep and creating the technology behind it.

‘Our unit economics are actually really good. The more customers we have the cheaper it gets.’

Its recent £650million valuation target raised some eyebrows at 13 times projected 2022 revenues, although it is largely consistent across its listed peers.

But it has projected a £26million loss this year before interest, taxes, depreciation and amortisation as it doubles down on its investment in tech and marketing and a widening loss of £62million the following year.

It will need to continue balancing both newer and more experienced investors across its Isa and Sipp offering, which it introduced over the past year, and its premium subscription.

It has not disclosed how many of its users held Isa or Sipp accounts, although demand is understood to have risen significantly.

The introduction of cryptocurrency trading in the new year could also boost customer numbers although details of related fees are scarce.

Where Freetrade has led the pack in the UK, it will be vying with rivals like Sequoia-backed Trade Republic when it moves into the continent in the new year.

Freetrade has incorporated a separate entity in Sweden to be properly regulated as a European financial services company, and Nebehaj plans to move there for the first few months of operating.

‘We chose Sweden… because it has a very reputable regulatory jurisdiction and not a lightweight one,’ he says.

Regulators in both Europe and the UK have started to crack down on what they deem as the ‘gamification’ of investing as well as crypto investing more generally.

The Financial Conduct Authority has said trading apps can make it ‘easier for consumers to make bad decisions’.

Nebehaj rejects any claim that Freetrade does the same. ‘We don’t gamify anything. I’d be hard pressed to think of any feature [that gamifies]. The engineering team don’t have time to gamify anything.

‘It’s not something we think about… we’re focused on international expansion, which is a big structural improvement. We don’t have time to polish interactions too much.’

Where Freetrade does have the regulatory upper hand, particularly across Europe, is that it does not use payment for order flows.

The European Commission is set to ban the practice, which sees brokers receive payments from third parties for directing client order flow to them as execution venues.

There is some concern the players making use of this practice risk ruining the reputation of the wider platform industry.

‘Making money and building business? There’s nothing wrong with that – that’s what we are doing – but you have to have the right mentality and philosophy to building long term.’

Last month, when Freetrade reached 1million registered UK users, it said that was 400 per cent annual growth and October was record month for new funded customers, with 115,000 signing up – double that of January.

It will be hoping to take this kind of customer blueprint to Europe.

Adam Dodds adds: ‘It’s humbling that our customers have entrusted over £1billion in assets with us.

‘We built Freetrade to make investing more accessible, supporting our customers in making decisions that should benefit their finances over the long term. We’ve brought simple investing to hundreds of thousands of customers for the first time.

‘And we’re going to carry on this momentum with renewed dedication to a clear belief: investing should be accessible to everyone.’

Investing online is simple, cheap and can be done from your computer, tablet or phone at a time and place that suits you.

When it comes to choosing a DIY investing platform, stocks & shares Isa or a general investing account, the range of options might seem overwhelming.

Every provider has a slightly different offering, charging more or less for trading or holding shares and giving access to a different range of stocks, funds and investment trusts.

When weighing up the right one for you, it’s important to to look at the service that it offers, along with administration charges and dealing fees, plus any other extra costs.

To help you compare investment accounts, we’ve crunched the facts and pulled together a comprehensive guide to choosing the best and cheapest investing account for you.

We highlight the main players in the table below but would advise doing your own research and considering the points in our full guide linked here.