With their middling teams stumbling to defeats in New York and Washington on Monday night, beleaguered Yankees and Nationals fans were graced with two new heroes at their respective ballparks: a frightened cat and a peaceful, stoic praying mantis.

The former got loose in the Yankee Stadium outfield in the bottom of the eight inning, causing a seven-minute delay and bit of anxiety for any feline aficionados in the crowd.

‘Must be so frightened right now,’ Yankees television announcer Michael Kaye told his audience as the domestic shorthair darted along the warning track, weaving in and around grounds crew workers. 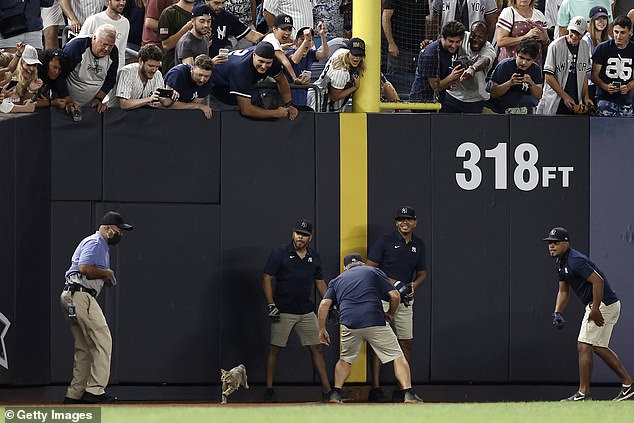 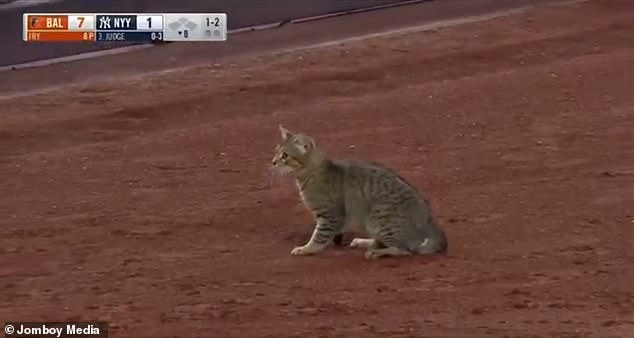 Yankee Stadium security chases a cat around the field for nearly four minutes and never gets its hands on what might be the most elusive animal that ever lived pic.twitter.com/w2HR4H3HaW 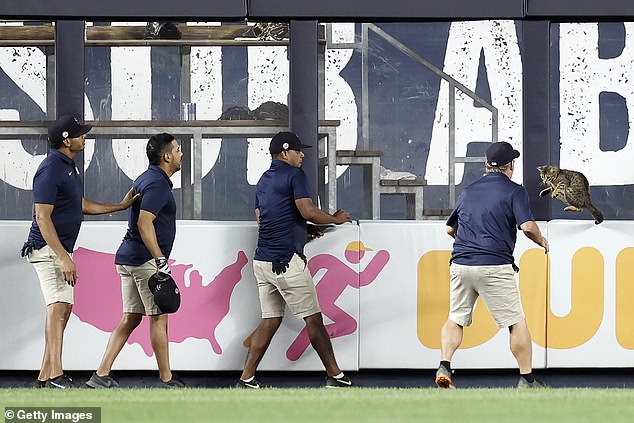 The Yankees were trailing the Baltimore Orioles, 7-1, so spectators were all too happy to focus their support on the cat with chants of ‘MVP’ — a chorus traditionally reserved for the likes of Thurman Munson and Don Mattingly in the South Bronx.

But while the crowd cheered, the cat struggled to find a way out of the Yankee Stadium outfield.

Each of the cat’s attempts at escape proved fruitless, although it showed impressive athleticism while trying to jump over the outfield wall in the Bronx.

‘Good hops,’ said Kaye as he became increasingly critical of the situation.

‘If that person would open the door there, the cat might go through,’ he said, referring to the bullpen door in right-center field

‘Just open the door,’ he continued. ‘What are they doing?

‘Two times the cat was right near the bullpen door and they kept the door closed. It makes no sense.’

Eventually, after getting cornered in left field, only to escape to deep center and backtrack along the third base line, the cat finally scampered through an open gate and off the field.

Yankees spokespeople did not immediately respond to DailyMail.com’s request for an update on the cat.

Orioles outfielder Cedric Mullins told reporters after the game that he saw the cat ‘chilling’ in the dugout earlier in the night.

‘Next thing I know, I heard all the fans cheering. I didn’t know what was going on,’ Mullins said, as quoted by MLB.com. ‘I didn’t see the cat until he was out at the outfield wall. Then it was seeing seven grown men get their ankles broken by a cat. It was pretty funny to watch.’

Orioles manager Brandon Hyde joked that the feline had the makings of a well-rounded player: ‘The cat showed good quickness, agility and vertical, a few times.’

While Kaye showed concern for the nervous cat, he also recognized the humor of the situation.

‘Now we usually don’t show when somebody gets loose on the field, but this time we’re making an exception,’ he joked.

Cats aren’t unfamiliar with major professional sports in the US. In 2019, a feline ran onto the field during a Giants-Cowboys game at New Jersey’s MetLife Stadium, and in 2017, another climbed the Miami Marlins’ outfield wall.

More famously, a black cat wandered out onto the field at Shea Stadium as the second-place Mets hosted the first-place Chicago Cubs in September of 1969. The Cubs ultimately lost the game to the eventual World Champion Mets — a defeat that many Chicagoans and Cubs players blamed on the perceived bad luck associated with black cats.

But while black cats are considered bad luck, a praying mantis is supposed to bring good fortune.

Unfortunately for Nationals centerfielder Victor Robles, who played the eighth and ninth innings with the green invertebrate on perched on his hat, this mantis was either defective or a Philadelphia Phillies fan.

‘It’s a mantis praying for a rally,’ said Nationals announcer Bob Carpenter as Washington held a 3-2 lead in the eight inning.

That one-run edge soon became a two-run deficit as Philadelphia went on to win 5-3.

‘You come to the ballpark and watch a baseball game, you never know what you’re going to see,’ former Montreal Expos player F.P. Santangelo said on the Nationals broadcast.

Salesforce Consulting Services: Why Is It Highly In Demand?