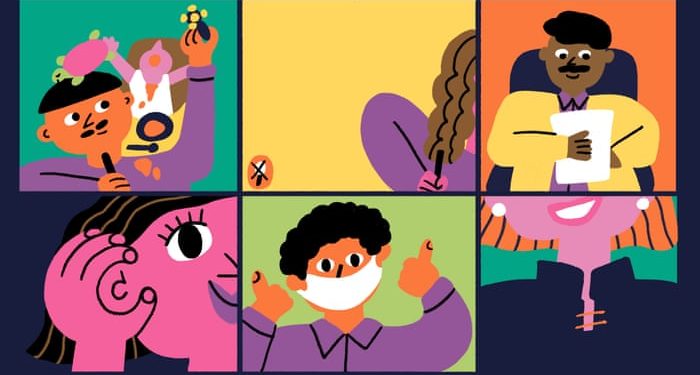 
The superhero parent
For many parents, hybrid working hasn’t been the time-freeing salve they’d hoped for. Yes, working from home may have resulted in less late pickup fees from the nursery, but it’s also seen parents beavering away at all hours of the day; confused colleagues frequently receive emails from them at 11.44pm and 6.45am. These sapped-out mums and dads also spend most remote meetings on mute with one eye anxiously trained on the door, fearing their video call might be screen-bombed by the cochlea-perforating din of their little tykes at any minute. Observing the juggle has given more than a few child-free colleagues serious food for thought.

The webcam refusenik
In the before times, this person was a consummate presentation giver, riffing their way through proposals and decks with all the oratorical flair of an Obama. But for some reason they haven’t taken to the virtual world quite so swimmingly. Maybe it’s the unforgiving camera angles, the demoralising exhaustion of back-to-back calls, or they’re just tired of staring at their own face for two years straight, but the instant the green light on their webcam flickers they switch it off and fade to black. Everyone else tries not to take this personally.

The office evangelist
When the lockdowns reached their zenith during 2020-21, this cubicle-championing colleague was missing the workplace so much they scented their home with an Eau d’Office candle while listening to keyboard-clacking on a specially created soundtrack called Sounds of Colleagues. Now, as work has gone hybrid, they’re back in the office five days a week, bounding from desk to desk, bemoaning homeworking as being detrimental to “office culture”. For them, the office is a second home; an invigorating place full of neverending Colin the Caterpillar cakes and the comforting hum of the air purifying system. Put a futon by their computer and they’d sleep there if they could.

The teleworking technophobe
It’s been two years since the pandemic hit, yet the teleworking technophobe is still struggling with their tech. During virtual meetings, the group chat – unavailable to teleworking technophobes because they’re still unable to locate the chat tab – is alight with co-workers wisecracking about their wince-inducing lighting, the fact their face fills the entire screen like a dinner plate, and last year’s annual general meeting when they became a meme after getting stuck in a video filter that turned them into a talking pizza. Sadly, the hotdesking and huddle rooms of the new hybrid-reconfigured workplace is proving to be equally befuddling. IT has stopped taking their calls.

The smug stay-at-homer
The smug stay-at-homer is lying low in the hope they won’t have to return to the office – even if it’s only for two days a week. And no wonder – whenever they dial into meetings, it’s from their new high-spec “shoffice”, with their pandemic-purchased spoils behind them (cocktail trolley, gold-plated exercise bike; not commuting has saved them so much money). No amount of free coffee or away days to the local abseiling centre will ever lure them back.

Team Tuesdays to Thursdays
These colleagues think they’ve got hybrid office life hacked. No more Blue Monday commutes or long Friday afternoons, waiting for the clock to strike 5pm for them; they now work a 3:2 timetable, and have ensured their mandatory three days in the office span Tuesdays to Thursdays, bagging them what they like to think of as a four-day weekend. Working nine to five never felt so good.

The bewildered first-jobbers
They entered the world of work during lockdown, and it was months before they saw any of their colleagues from the neck down. Now, they’re in the office for the first time, and it’s a shock to the system. They spent their first morning gawping at their lanyards like a caveman staring at a smartphone. Since then, they’ve drifted aimlessly around the workspace looking as if they’ve just tumbled out of a time machine, wondering why some people actively choose to sardine themselves into public transport for two hours, only to spend the day making copious hot drinks and having endless “thermo-spats” about office temperature.

Whether you’re a superhero parent, office evangelist or smug stay-at-homer, HP Presence can elevate your hybrid working experience. With both meeting space and remote solutions that incorporate advanced collaboration technology such as AI Noise Reduction and Auto Frame, HP Presence makes sure everyone is seen, heard and able to share their thoughts – no matter where they are. Discover more at hp.com/uk-en/solutions/presence.html