Fuel duty explained: What is it and how does it impact petrol prices? 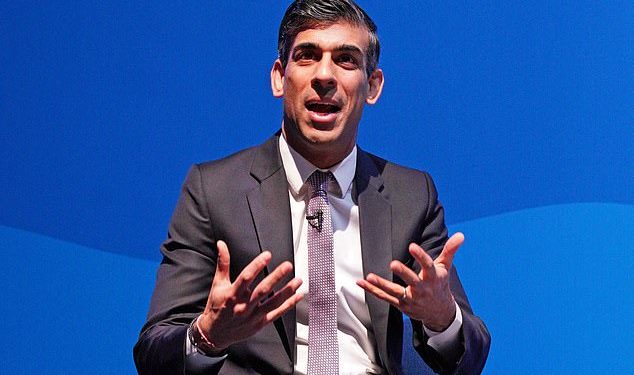 
With the Chancellor announcing a 5p-a-litre cut to fuel duty from 6pm on Wednesday, it presents an opportune time to give you a refresher course on what it actually is.

Rishi Sunak confirmed in his Spring Statement that he has trimmed the levy on every litre of fuel from 57.95p-a-litre to 52.95p as part of efforts to ease the burden of record petrol and diesel prices on motorists.

It is only the second cut to fuel duty in 20 years (the first was in March 2011) and the lower rate of duty will be kept in place until March 2023. The RAC calculates that it will reduce the cost of filling a typical 55-litre family petrol car by around £3.

Here we explain how much fuel duty contributes towards the total cost of petrol and diesel, when it was first introduced, how expensive it is in comparison to taxation in other countries and what the future is for the levy when cars switch to electric power… 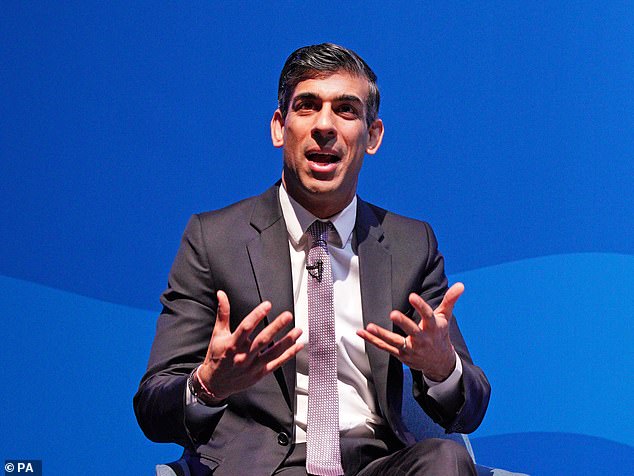 Chancellor Rishi Sunak (pictured) has trimmed fuel duty by 5p in his Spring Statement. Here, we explain everything you need to know about fuel duty

What is fuel duty?

Fuel Duty is an excise duty included in the price you pay for every litre of fuel pumped into a vehicle.

Ahead of the Spring Statement, fuel duty on both petrol and diesel was 57.95p-a-litre. It had been frozen at the same rate since 2011.

Duty is different for alternative fuels, with the rate of fuel duty calculated by the kilogram: for liquefied petroleum gas (LPG) it is 31.61p per kg; for natural gas – for example biogas – it is 24.7p per kg.

The rates of all road fuel duties can be adjusted annually by the Chancellor of the Exchequer.

Why has fuel duty been cut?

The cost of petrol and diesel has sky-rocketed to an all-time high in recent weeks.

Oil prices surged immediately after Russia’s invasion of Ukraine due to supply fears, leading to a rise in forecourt prices.

While prices were already increasing as global economies recover from the coronavirus pandemic, petrol increased by 18p-a-litre in the last month alone. 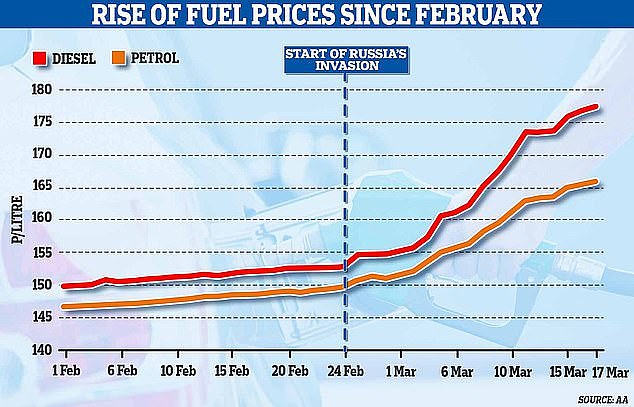 Oil prices surged immediately after Russia’s invasion of Ukraine due to supply fears, leading to a rise in forecourt prices

Pressure has mounted on the Chancellor to spare the nation’s drivers from the escalating cost of filling up.

While Mr Sunak says the 5p-a-litre cut will be in place from tonight, the RAC warned that drivers might not notice an immediate decline in prices at the pumps.

Nicholas Lyes, head of policy at the RAC, said: ‘In reality, reducing fuel duty by 5p will only take prices back to where they were just over a week ago.

‘With the cut taking effect at 6pm tonight drivers will only notice the difference at the pumps once retailers have bought new fuel in at the lower rate.

‘There’s also a very real risk retailers could just absorb some or all of the duty cut themselves by not lowering their prices. If this proves to be the case it will be dire for drivers.

‘It also wouldn’t be totally unexpected based on the biggest retailers not reducing their prices late last year when the oil price fell sharply.’

Despite the RAC’s warning, supermarkets including Asda and Sainsburys confirmed they had cut forecourt prices by 6p per litre on Wednesday evening, with the additional 1p reduction taking into account the impact on VAT (read more about this below).

While the cut is welcomed, it pales in comparison to action taken in other countries. In Ireland, for examples, fuel duty has been slashed by 20 cents (17p) for unleaded petrol, 15 cents (13p) for diesel.

‘The Government’s fuel duty announcement is a step in the right direction, but it does not go far enough to ease the burden on motorists,’ says Gordon Balmer, executive director of the Petrol Retailers Association.

‘Retailers are holding duty-paid stock which will be sold before the fuel duty cuts come in. To give the motorist an immediate discount at the pumps, the Chancellor would have to backdate the fuel duty cut to 1 March,’ he added.

For how long has fuel duty existed?

Incredibly, fuel duty has been around for over a century with a petrol duty first introduced as part of the Finance Act 1908 – which was also called the ‘People’s Budget’. It set out a taxation of a thruppence (3d) per gallon.

By 1915, this had doubled to 6d, albeit with a 50 per cent rebate for commercial vehicles.

However, just four years later it was abolished under the Finance Act 1919 in light of the first introduction of vehicle taxation and the tax disc. Unlike Vehicle Excise Duty today, taxation then was calculated in accordance to the horsepower rating of a car.

Fuel duty increases and cuts since 2001

With the price of fuel declining dramatically in the following years, the Government reintroduced a petrol duty at a rate of 4d per gallon in 1928 and the levy rose gradually as years progressed.

It wasn’t until 1993 under a Conservative Government led by John Major that tax on fuel began to climb at a significant rate.

In the March 1993 Budget, then Chancellor Norman Lamont hiked fuel duty by 10p per litre and introduced a ‘Fuel Price Escalator’ that was initially set at 3 per cent ahead of inflation per year – though that was increased to 5 per cent later the same year.

The escalator was increased to 6 per cent in 1997 under the Blair ministry with Gordon Brown taking control of the red box.

In March 2011, it was announced that the fuel price escalator would be replaced with a ‘Fuel Duty Stabiliser’, along with the level being trimmed back to 57.95p – the same value it remained for 11 years.

The aim of the stabiliser was to increase fuel duty if oil prices dropped below $75 a barrel, though it has remained frozen at the same rate for over a decade.

How much does tax contribute to the cost of fuel?

With fuel duty at a fixed price, it’s easy to calculate how much it contributes to the cost of petrol and diesel bought at forecourts.

However, fuel is also impacted by VAT, with 20 per cent added to the full cost of the product price and also levied on the duty – essentially becoming a tax on a tax.

Even with petrol prices reaching record highs in recent weeks, taxation – with fuel duty at 57.95p a litre – contributes towards over half (51.3 per cent) of total unleaded prices (based on average petrol on 21 March).

What makes up the cost of a litre of fuel – and how much of this is tax? 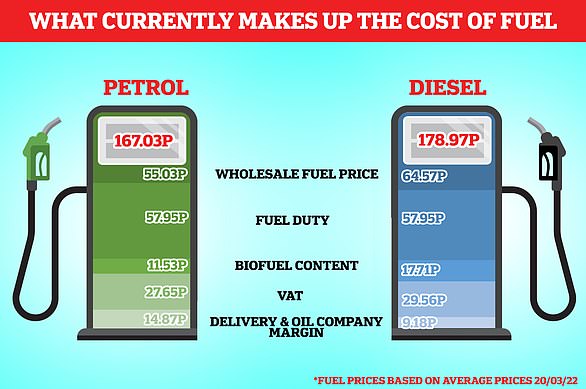 Despite record-high fuel prices, taxation has made up half of what we’ve been paying at the pumps.

With the help of the RAC, we’ve based our breakdown on the average unleaded price of 167.03p-a-litre on Monday (20 March).

Before the 5p-a-litre cut, some 35 per cent of what drivers pay for is fuel duty.

That’s around 3p more than the current wholesale cost of petrol, which accounts for 55.03p in every litre, which is a third (33 per cent) of the total price.

The two duties combined have seen the Treasury pocket over 85.6p for every litre of unleaded pumped into our car fuel tanks – some 51 per cent – in recent days.

The impact of the 5p-a-litre fuel duty cut will knock around 6p off forecourt prices – down to around £1.61 for a litre of unleaded and £1.73 for diesel.

How much does the Treasury generate from fuel duty each year?

Fuel duties represent a significant source of revenue for the Government – in fact, its the fifth largest of all taxes in terms of incoming funds.

Based on 2019/20 figures – which best represents pre-pandemic traffic levels – fuel duty raised £28billion for the Treasury.

That represented 3.3 per cent of all receipts and was equivalent to £1,000 per household and 1.2 per cent of national income.

Rishi Sunak said in his Spring Statement that 5p-a-litre reduction to fuel duty will cost the Treasury £2.4billion in tax cuts in the next 12 months – though this will be softened by higher VAT income.

How much could drivers save if Rishi Sunak was to cut fuel duty by 5p-a-litre – or more?

The RAC crunched the numbers on the potential savings a fuel duty cut could have for drivers.

The Chancellor’s reduction of 5p a litre will save motorists (based on 20 March average prices) £3.30 when filling a family petrol car.

The breakdown in cost savings if more significant fuel duty cuts were made are listed below:

What does the Government spend fuel duty income on?

Combined with VED, the Treasury generates around £35 billion per year from vehicle and fuel taxation.

Around 20 per cent of this is spent on road maintenance budgets, with the rest used for general government expenditure.

How expensive is fuel duty compared to fuel taxation in other countries?

While 25 out of the 27 EU nations (which excludes and Norway and Switzerland) currently have lower levies on excise duty on diesel compared to petrol, Belgium – like the UK – has the same rate on both fuel types while Slovenia stands out as the only member to levy a higher rate for diesel over unleaded.

That said, UK fuel duty on diesel is among the highest of any of the EU nations.

It’s important to note that all EU countries – like the UK – levy value-added tax on petrol and diesel – though at differing rates by nation.

In terms of overall fuel prices, this means the Netherlands is the most expensive location to fill up with unleaded and Sweden the priciest for diesel, according to figures from RAC Foundation.

However, there will be some movement now that the Chancellor has trimmed fuel duty. 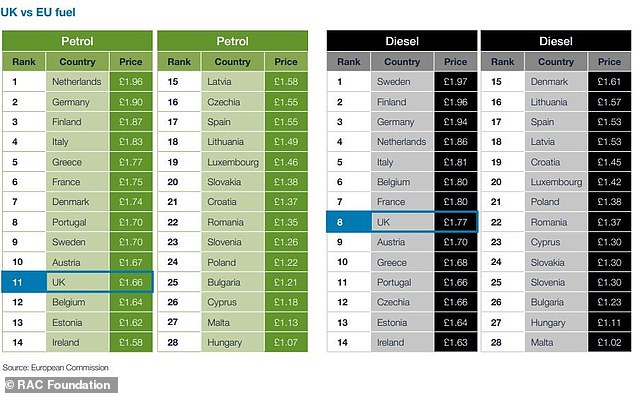 Source: RAC Foundation based on prices for 20 March 2022

How will the Government tax drivers when cars go electric and fuel duty is no longer applicable?

One of the big issues facing the Chancellor in the coming years is how he intends to plug the sizable black hole in Treasury coffers when electric cars become mainstream and taxation on petrol and diesel, as well as VED on emissions, is no longer applicable.

The most likely resolution will be a shift to a road pricing scheme, with motorists charged by the number of miles they travel – something that can be tracked using telematics technology.

However, the Government nor Rishi Sunak have cemented their plans for this, or how a taxation system will operate during a period when the roads are shared by vehicles with internal combustion engines and a growing number of battery models.