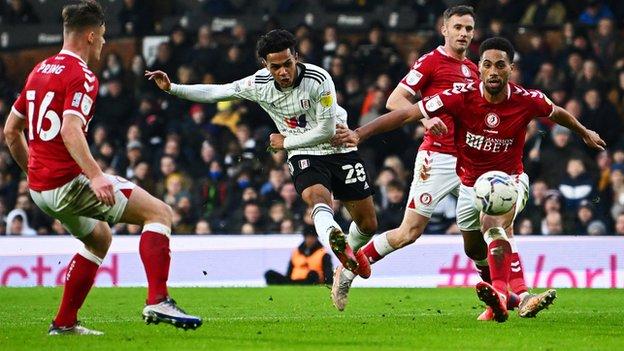 
Fulham boss Marco Silva says Fabio Carvalho is “very happy” at the club despite the collapse of his proposed deadline day move to Liverpool.

The clubs agreed a fee in the region of £8m for the 19-year-old winger shortly before Monday’s deadline.

However, the final details of the transfer could not be concluded in time.

Had the move gone through, Carvalho would have spent the remainder of the season back on loan at Craven Cottage.

“The day after, I saw him with the same smile on his face like always,” Silva said before Fulham’s FA Cup fourth round tie against Manchester City.

“He came into the session to enjoy and to work hard and that is the most important thing for him.”

Carvalho’s contract expires in the summer, when he will become a free agent, and Silva says he does not know where he will be playing next season.

“Fabio will be with us until the end of the season,” Silva said.

“I said [this] last week and 15 days ago, and in that moment I was 100% sure because it was something we could control.”

Defender Neco Williams joined the Cottagers on loan from Liverpool before the transfer window closed, after Denis Odoi completed a permanent move to Club Brugge.

Odoi, 33, spent five-and-a-half years at the club and Silva said he was surprised to see the Belgian leave.

“The player was really wanting to go back to his country to enjoy the new challenge, it was a really good offer for him,” he said.

“He is a player who was a really great servant for our club and a fantastic professional.”

Silva said he and his players were looking forward to Saturday’s visit to Manchester City, who he described as “maybe the best team in the world”.

“There is always something special behind this type of game, possibly the toughest game of the season for us,” he said.

“Since Pep [Guardiola] joined the club they have really dominated, not just in terms of results but also with the quality of the football as well.”

Erling Haaland, Kylian Mbappe … and Cristiano Ronaldo? Who could move in a blockbuster summer transfer window

Erling Haaland, Kylian Mbappe ... and Cristiano Ronaldo? Who could move in a blockbuster summer transfer window