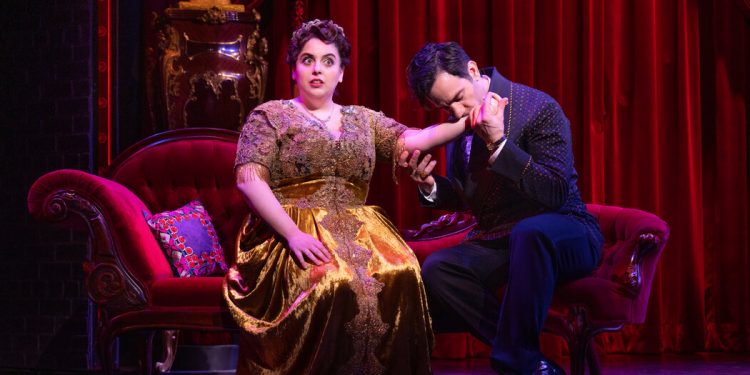 But those distortions at least make a good story. The bigger distortions — perhaps necessitated by the fact that Ray Stark, who produced the original, was Brice’s son-in-law — avoid one. Arnstein did not get involved in illegal activities because he hated being supported by Fanny; he was a crook and a jailbird who had been gladly sponging off her from the beginning. Yet Brice, knowing all that, still adored him, which makes a far more interesting tale than the bowdlerized one the show offers, of a duped woman finally and regretfully seeing the light.

That Arnstein wasn’t remotely gorgeous, and Karimloo totally is, we can allow. Karimloo also sings beautifully and, to the extent the new book tries to beef up the role, he’s got the beef to do it.

Unfortunately the effort is counterproductive. The song “Temporary Arrangement,” in which Nick expresses his mounting fury, has been retrieved from the Styne-Merrill trunk, where it was stashed after one performance in 1964 and should have remained; its intensity comes out of nowhere and rips at the show’s thin fabric. A bit later, Nick gets a version of the title song, which though shot for the 1968 film, starring Streisand and Omar Sharif, was cut for good cause.

More happily, when Feldstein sings her own version of “Funny Girl” near the end of the show, it’s simple and touching — not overstretched like her merely loud renditions of the big three hits: “I’m the Greatest Star,” “People” and “Don’t Rain on My Parade.”

Perhaps that’s because she’s finally just sitting down with no one else onstage. (Most of the musical staging, by Ellenore Scott, is hectic.) But if Fierstein’s stabs at strengthening the secondary characters pull focus from the central one, they do help the production in small ways. As Fanny’s mother, the naturally eccentric comic Jane Lynch brings us closest to the Brice spirit, suggesting in “Who Taught Her Everything She Knows?” that zany ambition is a heritable trait. And though Jared Grimes, as Fanny’s pal Eddie Ryan, is somewhat wasted in that song, he earlier makes a fine cameo of the production’s most notable dance, a stunning tap sequence choreographed by Ayodele Casel.