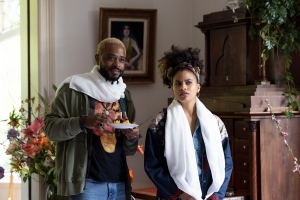 
“Sounds like Santa’ slave, but I respect the rebrand,” exclaims Donald Glover’s Earn to his Dutch driver’s explain of the Sinterklaas tradition and the question of “what’s with all the blackface?” in the second episode of the Atlanta’s third and penultimate season.

Yes, Atlanta is back, and if the first two episodes are any indication, it was truly well worth the four-year wait.

Having just previewed its March 24 season 3 debut at SXSW, the celebrated Donald Glover created FX series has created an idiosyncratic site in the culture that straddles Ralph Ellison’s classic Invisible Man novel, Virginia Woolf’s Orlandothe tone of Sun Ra and the ethos of the Lost Generation. In short, based on what I’ve seen, it is a true American masterpiece.

Also to keep this short I’m not going to recite chapter and verse what goes down in the marvelously Hiro Murai directed “Three Slaps” and “Sinterklaas is Coming to Town” episodes premiering on the Disney-owned cabler next week. Honestly, I couldn’t do the Stephen Glover and Janine Nabers penned shows anywhere near the justice they deserve, and so any attempt to would be insulting at best.

Even more so, you should sit down and watch the episodes to banquet upon the artistry that permeates Atlanta. 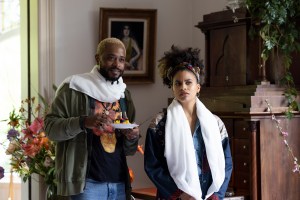 What I will say is that, as is already out there, most of Atlanta’s third season takes place in Europe as the rap career of Henry’s Paper Boi has exploded and he’s on tour with manager and cousin Earn, with Zazie Beetz’s Van and LaKeith Stanfield’s Darius along for the ride of sorts. The premise alone changes the fundamental dynamic of the show and still maintains its established ethos, which is a rare result.

In that context, drawing you into their world and slicing their perspective across the digital divide of creator and viewer, the seasoned core ensemble of the Emmy and Peabody Award winning series weave in and out and around each other and the narrative like virtuosos playing four notes ahead of themselves but never neglecting the basic melody. It is a sight to see, especially Eternals vet Henry and Judas and the Black Messiah star Stanfield. And especially the nightmarish and nuanced season opener led by the amazing talent of Christopher Farrer. An opener that may be all in someone’s head or directly impacting upon it.

Then again, the deceptions, dualities, and discerning code within the scripts and performances of Atlanta has almost always defied expectations since the show’s 2016 launch. Heading toward the series’ fourth and final season, this third season changes the fundamental backdrop and crosses oceans literally and figuratively to dives to glorious depths in contemporary television. Amidst that striving, there is a distinct unease here, as if a Great Gale is coming after the clouds gather.

“I think you are exactly where you’re meant to be,” notes a self-described Dutch “death doula” to Beetz’s anxious Van in that second episode of Season 3. Having last aired an original show in the seemingly long-ago May 2018, Atlanta has returned to be precisely where it wants to be.

A true and fantastic feat.