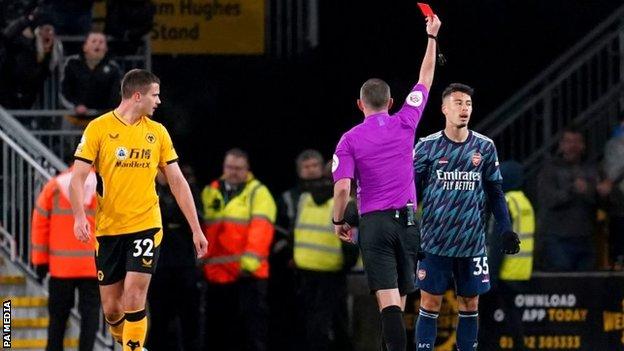 BBC pundit Clinton Morrison was all of us when Arsenal forward Gabriel Martinelli was shown two yellow cards – and therefore a red – all at once in the Gunners’ 1-0 win at Wolves.

After mis-controlling the ball and seeing it run out of play, Martinelli pushed Daniel Podence as he tried to take a quick throw-in.

Martinelli proceeded to chase him down and shove him over, prompting Oliver to show Martinelli the yellow card once, and then immediately again, followed by a red card.

“We made it even more difficult for ourselves playing with 10 men. We suffered a lot in the last 10 minutes.”

Ex-Republic of Ireland striker Morrison was the co-commentator for BBC Radio 5 Live Sports Extra: “I’ve never seen it before where you get booked twice in the space of five seconds. Arsenal do have a case [to be angry].”

Former Gunners defender Martin Keown on BT Sport thought it was unfair on Martinelli as he did not know he was going to be booked for the first foul.

He said: “It’s within the laws of the game but I thought it was pedantic from the referee.

“There’s a moral issue with what the referee has done. It doesn’t feel sporting.”

He thought Oliver should have stopped play after the first foul, although fellow pundit Joleon Lescott pointed out the referee did not know the Brazilian was going to commit another foul before he got a chance to book him.

Since Arteta’s first game in charge of Arsenal in December 2019, the Gunners have received 15 red cards, seven more than any other Premier League side.

“To win football matches like that [with 10 men] is extremely difficult and we have to stop it,” said Arteta. “We’ve been talking about it. I have run out of ideas [about how to stop it], I think.

“We need to play with 11 players in the last 16 games and that is key. To win games with 10 men is very unlikely.”

“It’s clear, so clear. When you look at the image it’s a strange decision.”