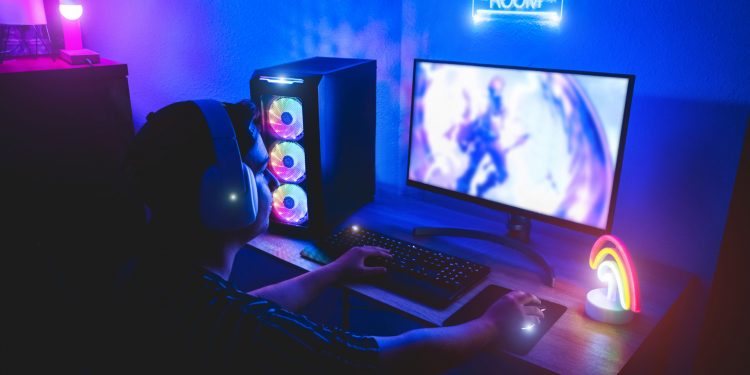 
I’ll let you into a little secret: I’ve never really got on with gaming laptops. In the many years I’ve been a tech journalist, I’ve had the chance to try out some incredible gaming laptops – but while I’ve been impressed with their performance, I’ve never felt the need to own one.

Instead, I’ve always returned to my trusty desktop PC. It feels more comfortable to use, and despite mobile components being more powerful than ever, even the mightiest gaming laptop can’t compete with my desktop PC when it comes to raw performance.

The fact that I can upgrade my PC to keep it current, or swap out any problematic components, also means it’ll have a much longer lifespan than a laptop. Sure, after a while my PC ends up like the Ship of Theseus – if every component is eventually upgraded, is it even the same PC? But it’s certainly cheaper than buying a whole new gaming laptop every five years or so.

Of course, my aversion to gaming laptops has meant I’ve missed out on the portability and convenience they offer. I love my big, bulky, inconvenient desktop PC, but I’m not going to be taking it anywhere with me.

Meanwhile, gaming laptops didn’t really make me feel like I was missing out on too much. Yeah, they were more portable than my PC (which isn’t really difficult), but they were still bulky and heavy enough that I wouldn’t really want to carry any of them around with me. Their poor battery lives also meant that if I wanted to do any serious gaming, I’d need to be plugged in – limiting that much-vaunted portability.

So, there I was being perfectly happy with my desktop PC life. When I fancied playing my PC games downstairs on the TV in my lounge, buying a gaming laptop wasn’t ever a consideration for me – I just built a compact small form factor desktop PC. OK, maybe I have a bit of a desktop PC dependency…

While no gaming laptop has managed to convince me, the new Steam Deck handheld offers me everything I felt laptops couldn’t. It’s compact enough that I can comfortably carry it around with me, and I can use it on a bus or a train – something I’d never do with a gaming laptop.

As with gaming laptops, it gives me access to loads of my PC games, and while playing non-Steam games is more tricky, there are workarounds. The Steam Deck has also made me go back to games I thought I’d never play again. I’d have never fired up Hotline Miami on a gaming laptop, but I tried it on the Steam Deck, and I couldn’t put it down.

There’s also new games – such Tunic – which look like the perfect fit for the Steam Deck. This Zelda-inspired RPG works brilliantly on the Steam Deck, and I couldn’t imagine playing it on a laptop or desktop.

The compact design of the Steam Deck has meant that I’ve played on it far more than any gaming laptop – but there’s another important difference that has made me more willing to pick up and play on the Steam Deck: no Windows 10 or 11.

The Steam Deck runs on the Linux-based Steam OS 3.0, and I’m increasingly convinced that this is a masterstroke. It means booting the Steam Deck takes a few seconds, and Valve (the company behind the Steam Deck), has been able to implement features that don’t come with Windows 10 or 11, such as the ability to turn off the Steam Deck, which suspends your game. When you turn it back on, your game is running and you’re where you left off, making it perfect for a quick play when the mood takes you.

Playing a game on a Windows gaming laptop, by comparison, feels like a chore. After booting Windows, or waiting for it to wake up, you then need to open up the game launcher for the game, then launch the game. By that point you’ve probably missed your stop.

Of course, there are still things that you could argue gaming laptops have the edge. They’re more flexible, for a start – so you can use one for working on when not gaming. The Steam Deck does have a desktop mode, though, allowing you to run certain applications, and if you plug in a USB-C hub, you can use a keyboard, mouse and monitor. While it’s not quite as useful as a laptop, you could use it as a PC for many tasks. You can also install Windows 10 on the Steam Deck, if you want.

There are also power considerations. Pretty much any gaming laptop is going to out-perform the Steam Deck – but I found myself not really caring. There’s enough power in the Steam Deck to run games like God of War and Elden Ring with a decent level of performance, and while I think the Steam Deck is more suited to arcade-inspired indie games, it means if you want to play a AAA title when you’re away from your main machine, you can.

I found it particularly enjoyable to quickly fire up Elden Ring for some rune farming and upgrading while on the couch. As a father to a toddler, this fits into my life well. Again, I never had the urge to do the same with a gaming laptop. Thank to some hard work by Valve, Elden Ring also performs better in some respects than my expensive gaming PC.

The final thing the Steam Deck has going for it is price. At $399 / £349 for the base model, $529 / £459 for the 256GB version and $649 / £569 for the 512GB model, the Steam Deck is a lot less expensive than most gaming laptops. While it’s not easy to get hold of one at the moment – there’s a waiting list that’s several months long – I would recommend getting a Steam Deck over a gaming laptop pretty much every time, especially when stock ramps up and they get easier to buy.

There have also been hints that not only is the Steam Deck the first in a range of models from Valve, third party manufacturers may make their own spins on it. This could see a new category of handheld PC gaming devices based on the Steam Deck, and if that happens, gaming laptops could be in a lot of trouble.

Not convinced? These are the best gaming laptop deals: