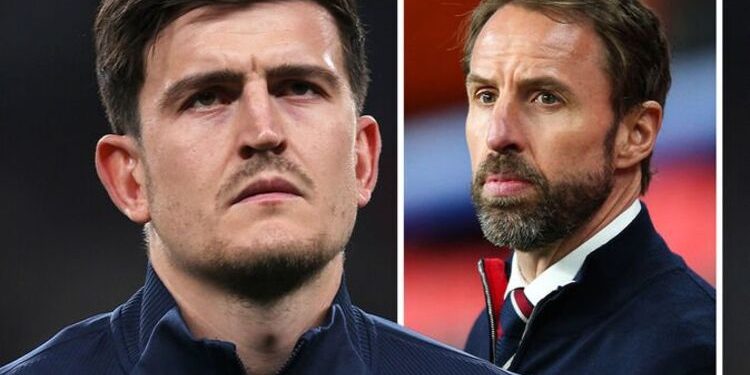 
England boss Gareth Southgate is sickened by the abuse handed out to Harry Maguire but cannot offer him the backing of a guaranteed place in Qatar. The Manchester United captain’s name was booed at Wembley even before kick-off on Tuesday night against Ivory Coast.

It was a continuation of the criticism he has been attracting at club level after some poor performance recently for United. But while Southgate knows that offering his wholehearted support to Maguire would mean a lot to the 29-year-old right now, he cannot hand out any World Cup passes yet.

“I’m not going to give any of them that [a guaranteed spot] because they’ve got competition for places,” he said. “This week we’ve seen Marc Guehi play extremely well, Ben White play extremely well, I think Tyrone Mings’ record of clean sheets with England is outstanding.

“John Stones, we weren’t able to get on the pitch. Yes, Harry has been in our No 1 pairing through those tournaments and has my full backing and support. But equally I’m not going to say to anybody in the middle of March that they are a guaranteed starter in the World Cup team. That’s not the environment I’m looking to create and not the competition we are going to need.”

Southgate, however, has absolutely no sympathy for the so-called England supporters handing out the abuse and hinted at the same sort of mindlessness that allowed the minority to spoil the Euro 2020 final last summer. “I don’t understand how it benefits anybody,” he said. “I would imagine if you were to ask people why they were doing that they wouldn’t be able to answer. It becomes a mob mentality.”

“Don’t think for one minute the other players are not looking at that and thinking that could be me one day,” Southgate added. “That has been one of the problems of playing for England. Players have thought, ‘Do I want to go, because when it turns a bit difficult the crowd are going to turn on me?’

“That happened with John Barnes here. It happened with Ashley Cole a couple of times and with Raheem Sterling. Now it’s Harry. They are all outstanding players, so how that behaviour is going to benefit anybody, I really don’t understand. We are united as a team. We need a Harry Maguire playing well to have a chance of doing well this summer because we are not going to win a World Cup with players who have three or four caps.”

Phil Foden is meanwhile gradually becoming more and more convinced that England have it within themselves to win the World Cup. Having been part of the Euro 2020 campaign he knows the squad have what it takes to win a major final.

But increasingly he is seeing the arrival at senior level of players like himself who know what it means actually to win the World Cup – albeit at the under-17 level. This week he has been joined at the senior camp by Emile Smith Rowe, Guehi and Conor Gallagher who were all part of the victorious squad.

“100 per cent that experience gives us a better chance of lifting a trophy,” Foden said. “Because we were playing in full stadiums, especially the final which was a full turnout, so to have that experience at that age and win a major competition was definitely important when you come into the first team and play in those big games.

“You already know what it is about as you’ve lived it. It definitely helped us and it’s nice to see a few of those from that team on the pitch now for England. Emile Smith Rowe has just come into the England squad and he was in that team as well. So it is nice to see.

“We have lived a final now at a major tournament, so if we get in those situations again we are going to know what to expect. We are all confident going into the World Cup and we believe we can go further and win it. We are confident.”