Spies at UK signals intelligence agency GCHQ will emerge from the bunker next month as they formally open a new office in central Manchester, sharing a building with sandwich shops, bars and a Chinese restaurant.

The move — intended to foster more collaboration with tech experts in business and academia — marks a shift towards greater public engagement as spy chiefs concede they need help from industry to stay competitive in the new era of digital espionage.

“It’s a changing world, and technology is changing faster than ever,” said Simon, the Manchester station chief. “Being here at the heart of the city and saying yes, we are much more open for business, we don’t have a barbed wire fence around us, yes, we share our building with other people — we think that’s a powerful statement.”

Simon, who nevertheless declined to give his surname for security reasons, insists the move to Heron House is more than a rebranding exercise, saying it marks a “fundamental change [in] how we behave as an organisation”.

But ever since Edward Snowden, a former contractor at the US National Security Agency, revealed the existence of GCHQ’s bulk data collection programme in 2013, the organisation has come under legal challenge from privacy organisations and faced a battle to regain public trust. Presenting a more transparent image while supporting British tech in a city which is seeking to establish itself as a cyber hub is inevitably part of this effort.

“A lot of people in Manchester haven’t heard of us and in some communities they might not instinctively trust us anyway,” Simon said. “So, by being good neighbours and by being good partners, we can help with that. ”

Being here at the heart of the city and saying . . . we don’t have a barbed wire fence around us — we think that’s a powerful statement.

The Manchester team is already running a rolling three-month mentoring scheme for tech start-ups seeking help from GCHQ technologists, and a separate research fellowship for applicants to work with a GCHQ adviser in the field of deep fakes and fake news.

In all other respects, the 400 spies based at Heron House will work on the same intelligence missions as their colleagues at the headquarters in Cheltenham. These range from defending against cyber operations by Russia, China and North Korea, to digital surveillance of terrorists, serious criminals and hostile state targets.

GCHQ already has centres in Scarborough, North Yorkshire, Bude in Cornwall, and London — where its cyber security branch set up a new office three years ago — but the Manchester outpost is the most open so far. Beneath two secure floors designated for top-secret work there is an entire floor devoted to public engagement, with a café-style entertaining area and a wood-panelled auditorium for lectures. It has been designed so that tech collaborators and academics will be able to work here alongside spies without having to undergo draconian security clearances.

Heron House is already well-known to Mancunians as the council office for registering births and marriages; its ground floor boasts a Greggs bakery, a takeaway sandwich shop and a Slug and Lettuce bar.

The contrast with Cheltenham’s “doughnut” building — a ring-shaped fortress on the outskirts of the town surrounded by wire fences, where it takes visitors several minutes to clear security at the perimeter — is stark. But there is barely enough space there for it’s staff of over 5,000. The rising cost of living has also made Cheltenham a less attractive place to work. The government is increasingly seeking to regionalise its operations beyond southern England and revitalise northern cities. The thinking behind the Manchester hub is that if GCHQ is seeking a more diverse intake of tech recruits, it needs a more public “shop front” to advertise its status as an employer to people who might never have considered a career in espionage.

Still, Heron House is not as open as it appears: beyond the industrial chic decor and Scandinavian-style furniture inside are clues that this is no ordinary office. Windows are frosted and secured from outside signals by additional thick glass panels. The boardroom’s giant picture window is one-way glass which allows those inside to see out but blocks the view within. Walls shared with other tenants are subject to extra protection to prevent unwelcome sound penetration.

Even with these precautions, GCHQ has come a long way from the secrecy of Bletchley Park, which was not revealed as a world war two code-breaking centre until the 1970s. Simon admitted that for traditionalists, the move is “challenging”.

“The organisation, when I joined it many years ago, was at the height of the Cold War and there was one main adversary, and it was called the Soviet Union and the work that we did against them was highly classified,” he said.

Other countries have been quicker to adapt. Conrad Prince, a former director for operations at GCHQ, now a cyber adviser for think-tank the Royal United Services Institute, said Israel has shown how “government, the private sector and academia work together on complex technology issues”. “We need to learn from them, while finding the right model that works for us,” he said. 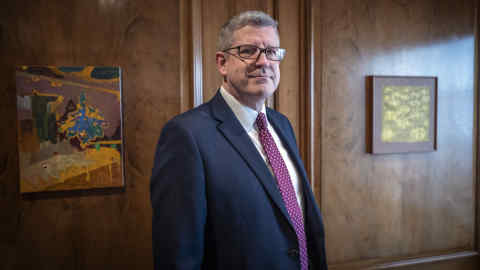 GCHQ officers refuse to be drawn on their specific interest in new technologies, but the 10 companies selected earlier this month for mentoring all focus on artificial intelligence and data analytics.

Sitting high in the boardroom, Simon is evidently enthused by the potential to revolutionise GCHQ. He says he’s adopted the Mancunian record label owner Tony Wilson’s famous line “this is Manchester, we do things differently here”.

“How do we work differently in this environment to the way we would behind the barbed wire fence in Cheltenham or Scarborough or Bude?” he asks. “I think we’re only scratching the surface of the potential.”

‘The Umbrella Academy’ season 3 to start filming in October

‘The Umbrella Academy’ season 3 to start filming in October