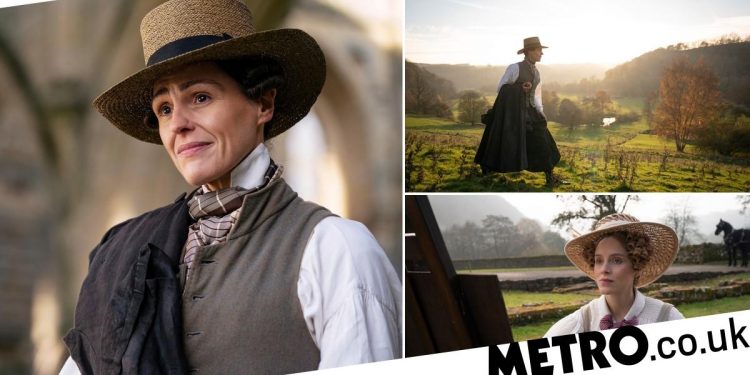 
Cracks are already beginning to emerge in Anne Lister and Ann Walker’s revolutionary marriage – but the drama’s just getting started as Gentleman Jack returns tonight for a season 2.

It’s been quite a while since we saw the Ann(e)s declare their love for each other and take their relationship to the next stage in emotional closing scenes back in 2019.

But if fans were worried it might have lost some of its momentum in the three years since, they can rest easy.

Episode one clearly asserts how season two will mean business in a big way, with more raucous behaviour from all sides, new love rivals and the battle for control over as much of Halifax as possible, which is clearly Lister’s (Suranne Jones) main other focus.

Our main pair are now married and set to live together at Shibden – but their situation seems to remain unwelcome by the local gossips as we join them just weeks after their commitment ceremony.

Still present are Walker’s (Sophie Rundle) struggle with her mental health after it rapidly deteriorated at the end of season one. She remains under the care of a doctor in Halifax, turning her attention to painting and other relaxing activities in a bid to aid her recovery.

Meanwhile, Lister spends an awful lot of time walking with purpose through the town, striking up deals as she continues on her mission to make things perfect for her partner’s return.

But with Walker still rather hesitant about the future and her wife going at it all guns blazing, actress Suranne previously warned fans of her alter-ego: ‘She’s not just on fire. She’s dangerous.

‘There’s so much going on with her that she is on the cusp of losing control almost at any point because she’s so excited with her life,’ she told press including Metro.co.uk at a recent screening in London.

The wives will face much opposition not only to their choice of lifestyle but the threat of old flames threatening to undo the new marriage.

Scorned ex Mariana (Lydia Leonard) is back in the picture, sending letters to Lister as she tries to work her way back into her former love interest’s life – but could she ever be swayed to betray her wife? We’re not sure just yet, but potentially some major upset to come here.

Stephanie Cole is particularly glorious as Walker’s stubborn aunt, who is, well, far from a fan of Lister’s and opposed to the idea of her niece starting up a life with the entrepreneur. It’ll be great to explore this clash in bold personalities further as the season develops.

Visually, this is one of the most beautiful things you’ll watch all year. From the carefully crafted period costumes adorned with curls and corsets to the stunning Yorkshire scenery, which helps the show retain so much charm.

The clever use of the fourth wall from Lister’s POV means fans feel connected to Lister’s strength of character, without it feeling cliched – which Suranne pulls off so well.

Sophie perfectly portrays the mental conflict her character deals with almost constantly, never quite being able to make up her mind on how she feels. The actress shows Walker’s vulnerability but allows her a lovely glimpse of confidence and assertion every once in a while, which hopefully she will build upon further as the story continues.

Luckily, there are plenty of laughs in episode one to look forward to, with brilliant one-liners often coming from the whole of the Lister clan, as well as Aunt Ann Walker.

The excellent Joanna Scanlan will soon join as another of Lister’s ex-lovers in what is an undeniably brilliant addition to the cast. Scanlan is one of the UK’s biggest talents, hot off winning a Bafta for best actress at last month’s ceremony – she’ll surely slot straight in here.

While it’ll soon become clear there’s perhaps a tricky road ahead for the pair, ultimately their love story is what underpins the narrative, with Lister often being thought of as the ‘first modern lesbian.’

The series has clearly had a massive impact on the LGBTQ+ community too, even being life-changing for some viewers.

During the London launch of season two, leading lady Suranne heard from an audience member who came out as a trans man after watching her portrayal.

‘Thank you for loving us and appreciating us and bringing us into your life,’ she commented in response, before adding: ‘I think you will find out in season two what love is to Anne Lister but it is a shock to her what love is and it’s not what she thought it was.’

Well, time to strap in!

Gentleman Jack begins tonight at 9pm on BBC One.