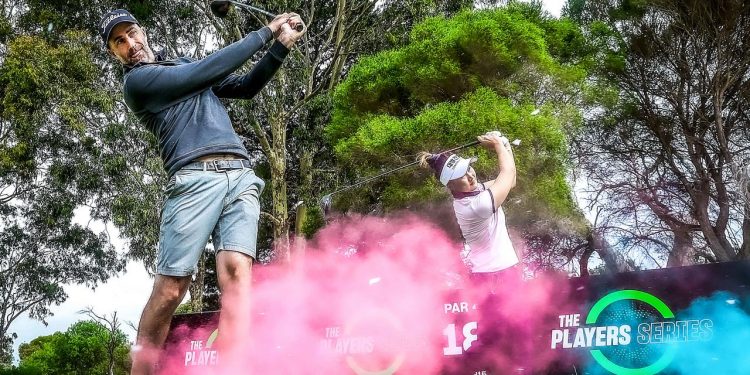 Major champion Geoff Ogilvy wants to reinvigorate the Australian summer and will hit the phones to make it happen.

Geoff Ogilvy knows the power a phone call from a fellow pro when asking the question “will you play?” can have.

It’s why the numerous WhatsApp groups the 2006 US Open champ is part of could loom large in the quest to reinvigorate the Australian summer of golf, a quest Ogilvy has dived into significantly in a bid to “to connect those two worlds again”.

When Ogilvy packed up his seriously successful career on the US PGA Tour and headed home to Australia the plan wasn’t to become something of a local saviour.

That’s probably too strong a word.

But for a huge number of local pros who were locked at home by the global Covid pandemic, their capacity to earn money savagely reduced, with even the Australian Open put on its first hiatus since World War II, Ogilvy’s entrepreneurial endeavours have been a godsend.

The 2006 US Open champion, a winner of 12 events around the world during, is “host” of a new series of four events called “The Players Series”, events for men and women offering significant enough prizemoney given the barren local landscape for big-time golf.

The Sandbelt Invitational, an event created out of nothing by Ogilvy and former pro Mike Clayton, showed the capacity for invention the 44-year-old could bring to the local golfing landscape.

His thick contact book ensured invites went out to every Australian in the world top 100; that’s Adam Scott, Marc Leishman and Cameron Smith, currently the top-ranked Aussie at 11.

Ogilvy knew they couldn’t come for the event, staged around four courses on the famed Melbourne sandbelt, but it was the idea that counted.

The feedback was positive too, and Ogilvy is now confident he could be the “link man” between the world’s best players and local tournament organisers to fill a gap he feels has been created.

“Certainly when the phone rings and it’s an ex-peer you have good relationships with there’s certainly more likely to answer the phone and respond,” Ogilvy said this week before the latest instalment of The Players Series in Rosebud, on the Mornington Peninsula outside of Melbourne.

“I think that’s one of the things we haven’t done amazing over the years. Once we turned pro and went overseas we kind of disappeared and never came back or the communication lines, for whatever reason, got eroded away.

“One of my values is to connect those two worlds again. I think all of us can do it. We have a pretty incredible golf network and ability to get people to listen, answer emails, pick up the phone.

“I think collectively, not just me, if we can get, like a lot of the other sports do, once the players finish playing they stay in the sport, we haven’t done the best job of that.

“If I can be a part of bringing that aspect of it back, I think that would be great.

“I wouldn’t put it all on me, but me and my peers, to get the network back together. We’ve got a lot of very experienced, very knowledgeable people in golf around the world and if we can connect those pathways again, only good things can happen.”

The presence of a major champion at any event is significant. That Ogilvy has not only put his name to the local series, but has continued playing, draws positive attention.

He will tee it up in the Vic Open this week, having also played at Rosebud and the Australian PGA before that.

But while his playing presence is important, Ogilvy’s event knowledge is the new element he brings to the table, knowing what works and what doesn’t. From a player perspective, that can be key in bringing the big names to town.

It’s a point not lost on Golf Australia chief executive, James Sutherland, who sees value in tapping in to Ogilvy’s knowledge.

“His ideas align very much to our philosophy of golf being more fun … and creating playing opportunities for players to progress.

Those opportunities could come through those WhatsApp chats where Ogilvy will press the issue as often as he can to draw not just the best Australians but the best players here.

“That absolutely is a good avenue for us,” he said.

“From the players’ perspective there’s a lot of guys here who have played a lot of tournaments around the world and I think we have a bit of maybe wisdom to share.

“I don’t see why we can’t have a great summer of golf again. It’s coming back, it’s chipping away, there’s more there than people think. I don’t understand the complete picture at all, but we have a bit to offer, those of us who have played around the world.

“And anything we can do to help is my headspace.”

COVID-19 Was Leading Cause of Death in L.A. Over Past Two Years

COVID-19 Was Leading Cause of Death in L.A. Over Past Two Years