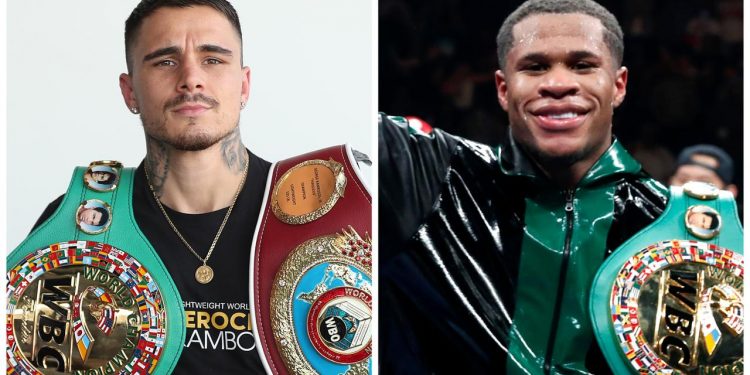 Australian George Kambosos Jr. (20-0, 10 KOs) is gunning to become the first undisputed lightweight champion in the four-belt era and he will be doing against Devin Haney (27-0, 15 KOs) down under.

Kambosos Jr. and his management confirmed the fight at a press conference on Friday, with the fight slated to take place on Sunday, June 5 at around 3pm (AEST).

It will be Kambosos Jr.’ first fight since 2017 in Australia, with up to 50,000 people set to pack into Melbourne’s Marvel Stadium for the bout.

“It is going to be an atmosphere like we have never seen,” Eddie McGuire said while introducing the event.

The Australian’s latest win came against Teofimo Lopez, with Kambosos Jr. returning back to Australia as the WBO, WBA, IBF and The Ring lightweight champion.

Haney, the WBC lightweight title holder, will represent a tough test for Kambosos Jr., boasting a 27-0 record as a professional and coming off breakthrough wins over Jorge Linares and Joseph Diaz Jr. last year.

Kambosos Jr. was initially supposed to fight Vasyl Lomachenko in the first defence of his title but the Ukrainian had to withdraw from negotiations to defend his home country.

The Australian has said that Lomachenko was his preferred option but he would settle for destroying Haney instead.

“He’s going to drown. To come back home, fight in front of 60,000 people… you better believe I will turn up and drown this kid.

“Many of his first 18 fights were in Mexico. It’s like having amateur fights really, not even. I’ve been into the lion’s den and beat the best of the best. I’ve been studying all these guys so I’ve got notepads and know exactly what I need to do to win this fight.”

Kambosos Jr. will be offered the chance at a rematch against Haney should he lose the fight in June.

Going back to June’s fight, Kambosos Jr. told Sporting Newslast week that he still plans to fight in Sydney in the future but that the “closed roof” was an important factor in deciding to have his first defence in Melbourne.

“One thing being a part of the [Jeff Horne vs Manny Pacquiao] fight – obviously as Manny Pacquiao’s sparring partner – you lose that atmosphere in that open arena,” he said.

“It’s great and I will fight in an open arena, but for this fight, for my homecoming, that closed roof, you don’t have to worry about weather, you’re gonna have the light show, it’s gonna look fantastic and it’s just amazing.”

Why is Vladimir Putin demanding Russian gas is paid for in roubles? | Rouble

Why is Vladimir Putin demanding Russian gas is paid for in roubles? | Rouble