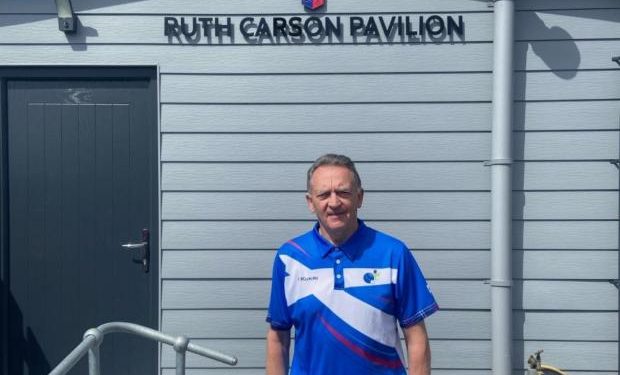 She and George, along with partner Robert Barr, and his director Sarah Jane Ewing, came through the gold medal match this afternoon, defeating the opposing Welsh pair 16-9 with an end to spare.

The Scottish pair reached this stage of the contest with relative ease, as they cruised through the six-team group stage.

They won all five of their matches (against Australia, Wales, England, South Africa and New Zealand) winning the maximum 15 points available.

They won 88 points along the way, dropping only 42, and set up a semi-final against ‘the auld enemy’, England.

The Scots would make light work of the home nation, winning the last four match-up by 21 points to 6.

In the other semi, group runners-up Australia were upset in a thrilling encounter with the Welsh, falling 13-10.

It set up an edge-of-your-seat gold medal match, which the Scots eventually pulled clear in at the halfway stage.

Having fallen behind 4-2 after the opening four ends, the Scottish pair clawed it back by end six, leading a further end later, 5-4.

It was end eight which really swung the tie, as an excellent last bowl by Robert Barr secured three points for Scotland, and put daylight between themselves and the Welsh.

The match was eventually put to bed in end 14 of 15, when two points for Scotland were enough to create an insurmountable 16-9 lead, after a three point end in Wales’ favour kept hopes alive only moments before.

The Herald spoke to George Miller at Saltcoats Bowling club following his selection.

It will be a proud moment for director George, who at 75 years and eight months, became Scotland’s oldest ever Commonwealth Games representative.

He spoke to the Herald after his selection, predicting then that the Scots had high medal chances, and told us what a medal would mean to him.

George correctly predicted: “I think we are in with a very good chance.”

He also joked that if he came back with a medal, he would “retire”. We look forward to catching up with george, and seeing if that is really the case!

READ MORE: Saltcoats bowler is going to the Commonwealth games