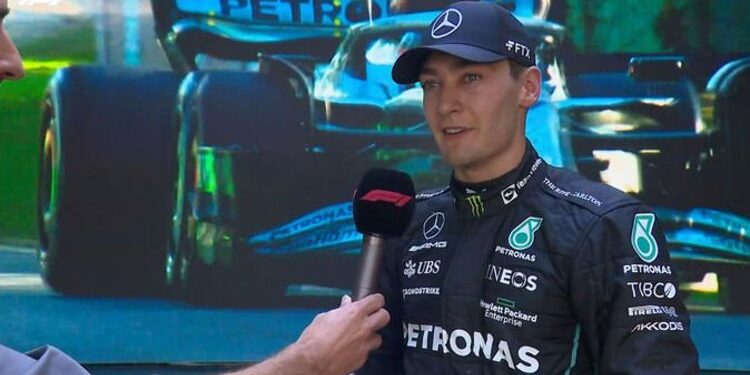 
Russell stayed out longer before his pit stop and benefitted from a safety car to move ahead of his team-mate Lewis Hamilton. The Briton was battling with Sergio Perez for what would have been second but couldn’t keep up with the Mexican’s pace.

He jumped up into third after Max Verstappen retired with less than 20 laps to go. After the race, he said: “

We’ve got to be in it to win it and capitalise from others’ misfortune. We got a little bit lucky today twice, but we’ll take it.

“There’s so much hard work going on to get us back. We are never going to give up, we were a long way behind and yet here we are, on the podium. If anyone can, Mercedes can.”

“To be standing on the podium is special.”

Verstappen’s late retirement chucked at least 18 points away for the Dutchman in his bid to retain the title. Race winner Charles Leclerc admitted he had a “chance” to challenge for the title after picking up his second win from three races.

He said: “It’s the first one where we’ve controlled the gap and what a car today. Of course, I did a good job all weekend, but it’s not possible without the car. Especially this weekend with the race pace, we were extremely strong.

“Obviously we are only at the third race, so it is difficult to think about the championship. But we’ve got a very strong car, a very reliable car too and for now we’ve always been there.

“I hope it continues like this and if it does then we probably have chances for the championship, which makes me smile.”

Newly self-employed? Here’s how to save for retirement — and cut your tax bills along the way

Newly self-employed? Here's how to save for retirement --- and cut your tax bills along the way