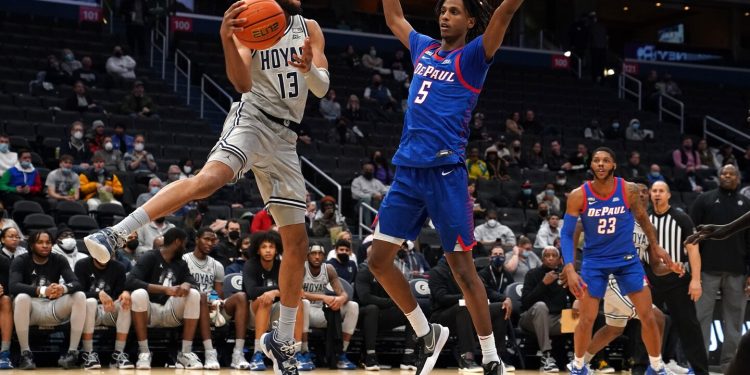 “We had opportunities to win,” embattled Hoyas coach Patrick Ewing said. “We got some great looks at the end of the game. Jalin Billingsley got a couple good looks. It just wasn’t going in for us tonight.”

Aminu Mohammed led Georgetown with 18 points, nine rebounds and four steals. The highly touted freshman also had an offensive rebound in the closing seconds as well as a steal that allowed the Hoyas to get the ball to Billingsley for a final three-point attempt.

Donald Carey added 15 points and three assists, and Billingsley finished with 10 points, making both of his three-pointers in the second half. The 6-foot-8 freshman forward came into the game having made just one of his eight three-point attempts on the season.

His final three-pointer came as the shot clock expired and delivered Georgetown a 64-63 lead with 2:15 left in the second half before Freeman-Liberty knotted the score by making the second of two free throws with 1:31 to play, setting up the hectic finish.

“We didn’t turn the ball over as much in the second half,” Ewing said. “Jalin Billingsley did a good job. They pressed. We did a good job of handling their press for the most part tonight.”

In a game with 11 lead changes in the second half, Georgetown moved in front, 50-45, when Carey scored six points in 30 seconds, including a layup with 10:47 to play. But the Hoyas went without a field goal for nearly seven minutes after that.

The Blue Demons went on a 13-3 run, getting four layups over that stretch, including two in a row from Freeman-Liberty, who scored a game-high 25 points on 8-for-21 shooting. He also made 8 of 12 foul shots and added seven rebounds and three assists.

Nick Ongenda and Yor Anei each chipped in 11 points for the Blue Demons (13-14, 4-14), who have only seven scholarship players on the roster under Coach Tony Stubblefield, a former assistant who replaced Dave Leitao this season.

The Hoyas claimed their first lead of the second half, 31-30, when Dante Harris converted an acrobatic layup with 19:12 to play, but DePaul responded by scoring five in a row, with three of those points from Freeman-Liberty.

Georgetown trailed at halftime, 30-26, after the Blue Demons threatened to build a commanding lead on the strength of a 12-0 run featuring consecutive three-pointers by Jalen Terry and Philmon Gebrewhit and Freeman-Liberty’s layup that led to Ewing calling timeout with 6:04 to go.

Ewing deployed small lineup following the stoppage, with all three of Georgetown’s 7-footers, including starting center Ryan Mutombo, remaining on the bench. The tactic yielded back-to-back three-pointers from Billingsley and Carey to reel the deficit back to two possessions.

What to know about Georgetown’s loss:

The Hoyas center came off the bench to help spark a 9-2 burst early in the second half with consecutive two-handed dunks. The first came off a lob from Carey, and after a DePaul layup, Wilson dunked again before Carey’s three-pointer gave Georgetown a 38-37 lead.

Wilson finished with nine points, the second most in his career, and three rebounds in 12 minutes. The 7-footer’s career high is 13 earlier this season against Howard.

Georgetown fell to 2-37 under Ewing in Big East games when it scored 70 points or fewer. This season the Hoyas’ six wins have come courtesy of their six highest point totals.

Hustle and hype: the truth about the influencer economy | Fashion industry

Hustle and hype: the truth about the influencer economy | Fashion industry