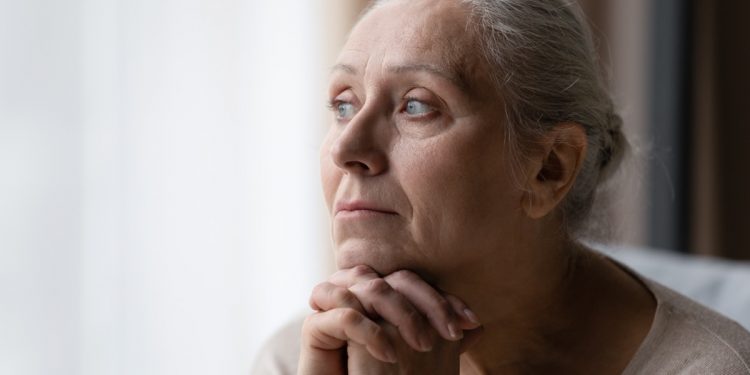 We tend to think of forgetfulness as going hand-in-hand with old age, but experts say that memory loss is actually not considered a normal function of aging. Significant memory loss is usually a sign of dementia, a group of symptoms that can also impact social skills and cognitive ability. While there is currently no cure for dementia, there are several ways that you can reduce your risk, or even reverse some of its early symptoms.

One particular risk factor for dementia is something you may not even realize you’re doing at night. Experts warn that if you do this regularly in your 50s and 60s, your risk of dementia later in life skyrockets by 30 percent. Read on to learn which nightly routine could be putting you at heightened risk, and why so much hinges on this one health habit.

From Alzheimer’s to Lewy body dementia, there are many different forms of dementia. These can affect different areas of the brain and present with a wide range of symptoms. However, broadly speaking, “dementia is caused by damage to or loss of nerve cells and their connections in the brain,” explains the Mayo Clinic.

Various risk factors can increase or decrease your chances of developing dementia, some of which—such as your age, family history, or the presence of Down syndrome—are outside of your control. However, there are several other factors that you can influence through behavior, for better or worse. Factors that raise risk include poor diet, lack of exercise, excessive alcohol use, nutritional deficiencies, head trauma, exposure to air pollution, unmanaged depression, and more.

READ THIS NEXT: Skipping This Step in the Bathroom Increases Your Dementia Risk.

According to a 2021 study by the NIH’s National Institute on Aging (NIA), one important factor you can control is whether you get enough sleep.ae0fcc31ae342fd3a1346ebb1f342fcb

The researchers, who published their work in the journal Nature Communications, analyzed data from roughly 8,000 British citizens without dementia beginning at age 50. Between 1985 and 2016, the subjects were assessed on various health measures, including how many hours they slept a night. “To assess the accuracy of this self-reporting, some of the participants wore accelerometers to objectively measure sleep time,” the NIH explains. By the time of the study’s conclusion, 521 participants had been diagnosed with dementia, at an average age of 77.

From this data, the researchers extracted one surprising discovery. Participants in their 50s and 60s who reported getting six hours of sleep or less were at significantly increased risk of developing dementia later in life. “Compared to those getting normal sleep (defined as seven hours), people getting less rest each night were 30 percent more likely to be diagnosed with dementia,” writes the NIH.

Sleep disturbances are a known feature of dementia, making it difficult to determine whether poor sleep is a causal factor that makes the disease more likely or a very early symptom. “Sleep problems and Alzheimer’s disease [the most common form of dementia] often go hand in hand,” Mayo Clinic experts explain. “Many older adults have problems sleeping, but people with dementia often have an even harder time. Sleep disturbance may affect up to 25 percent of people with mild to moderate dementia and 50 percent of people with severe dementia,” they write, adding, “Sleep disturbances tend to get worse as dementia progresses in severity.”

However, the NIH team believes poor sleep could very well be not only a symptom, but also an independent risk factor. “While we cannot confirm that not sleeping enough actually increases the risk of dementia, there are plenty of reasons why a good night’s sleep might be good for brain health,” says Séverine Sabia, MD, a lead author of the study.

The study’s findings are bolstered by past research which also suggests that getting adequate sleep protects cognitive function and memory. “Sleep isn’t lost time, or just a way to rest when all our important work is done. Instead, it’s a critical function, during which your body balances and regulates its vital systems, affecting respiration and regulating everything from circulation to growth and immune response,” explained neurologist Shai Marcu, MD, during a 2015 TED Talk.

He adds that sleep is “crucial for your brain, with a fifth of your body’s circulatory blood being channeled to it as you drift off. And what goes on in your brain while you sleep is an intensely active period of restructuring that’s crucial for how our memory works.”

So, if given the chance, tuck into bed a little earlier tonight. You might just remember to thank yourself down the road.

READ THIS NEXT: If You’re Over 50, Sleeping With This Item Will Prevent Aging.