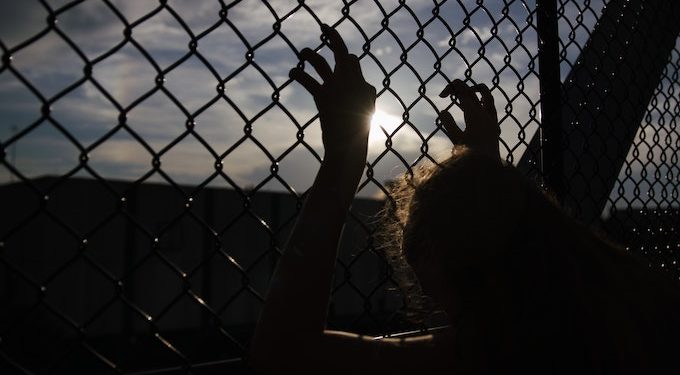 Accra, May 10 (IPS) – “It feels like yesterday when I was deceived by one man who claimed to be a travelling agent. He promised me a work opportunity and a good salary,” says 25-year-old Cissy, as she prefers to be called. “As a young lady coming from an average family who really needed help, I fell for his lies.”

Cissy says although she was a bit sceptical about the offer and afraid of her destination country, the so-called travel agent convinced her that she had nothing to worry about.

“He said I had a host mom who would receive me at the airport. In fact, she was the one sponsoring my trip, and I am supposed to work for her, and he claimed the work was legitimate,” Cissy adds.

However, the story changed when she arrived at the airport of her destination country.

“A man came to pick me up and collected my passport. I was taken to a house where I saw other young African women kept in the room, some having price tags. It was at that time I realised what I had gotten myself into,” she narrates.

She and the other women were later smuggled illegally into Iraq to work as domestic workers.

“I saw how my own African sisters were physically and mentally abused. Some were sexually harassed and subjected to forced labour on an empty stomach,” Cissy says.

She wanted to return to Ghana but was unable to until several months later.

After countless failed escape attempts, which left her fighting for her life, she finally had a breakthrough and was able to return home with the help of a good Samaritan and the authorities.

Since she returned last November, Cissy has devoted her time to irregular migration advocacy activities.

“I am happy to be alive today to tell you my story but not all the young ladies who travel out get the chance I got to return home to their families,” she says.

Issues of human trafficking continue to be a human right violation and cancer in Ghanaian society because it is a country of origin, transit, and destination for victims of human trafficking, Ayaregah, who is the Deputy Director of the Anti-Human Trafficking Unit in the Criminal Investigation Department.

Likewise, the Gulf of Guinea is characterised by cross-border and irregular migration, human trafficking, and child exploitation.

ASP Ayaregah says recently, the unit, with a Non-Governmental Organisation, End Modern Slavery (EMS), and the Social Welfare Department, rescued four children, two boys and two girls, from a trafficker and reunited them with their families.

He reveals that the two boys, aged 10 and 13, were trafficked by a family friend identified as Rose, a trader from Berekum-Senase in the Bono East Region of Ghana. She said the children would attend school while staying with her in Accra.

Instead of sending the children to school, as she promised, she sent the boys onto the streets to hawk.

Ayaregah says the suspect, upon her arrest and investigation, claimed that she has been sending Ghc30 (about 4 US dollars) to the boys’ parents in Berekum every month.

In another case, two girls, aged 13 and 17, were brought from Akim-Aboabo in the Birim Central Municipality and Adeiso to engage in ‘gari’, a dried cassava business at Amanase in the Ayensuano District in the Eastern part of the country.

The Director of Operations of End Modern Slavery, Afasi Komla, explains that “many victims of human trafficking have had traumatic post-rescue experiences during interviews and legal proceedings.

“In their attempts to get help, they have experienced ignorance, misunderstanding, victimisation, and punishment from offences their traffickers had them commit,” he says.

He adds that through the foundation, they have been able to help in identifying and saving hundreds of victims and supporting their rehabilitation.

Deputy Minister For Gender, Children and Social Protection, Hajia Lariba Abudu, says the country has responded to the issues of human trafficking in diverse ways. It passed the Human Trafficking Act, 2005 Act 694 to prevent, reduce and punish human trafficking offences and for the rehabilitation and reintegration of trafficked persons and related matters.

“The Ministry, together with our partners, we embark on community advocacy and engagements to educate the public on the dangers of human trafficking,” she says.

Abudu further indicates that together with the law enforcement officers, Social Workers and NGOs, the country in 2021 rescued 842 victims of human trafficking, gave comprehensive trauma-informed care, and reintegrated 812 of them.

“On the 1st of February 2019, the adults’ shelter was opened, and 178 adult female victims of trafficking have been cared for, and we are still receiving and caring for victims at the shelter now,” she says. “The Children’s Shelter was also fully operationalised in August 2020 and has cared for 98 child victims.”

She adds that the department received and investigated 108 cases, 42 being sex trafficking, 60 labour trafficking and six related cases that started as human trafficking offences.

“Thirty–four cases were sent to court for prosecution. Out of those, 22 cases were prosecuted involving 37 defendants, and we have gained 17 convictions for the country,” she adds.

Abudu says that even though a lot has been achieved, it is still not enough and calls for stronger partnerships to reduce human trafficking incidences, strengthen government institutions, and increase public knowledge.

This article is part of a series of features from across the globe on human trafficking. IPS coverage is supported by the Airways Aviation Group.
The Global Sustainability Network ( GSN ) is pursuing the United Nations Sustainable Development Goal number 8 with a special emphasis on Goal 8.7, which “takes immediate and effective measures to eradicate forced labour, end modern slavery and human trafficking and secure the prohibition and elimination of the worst forms of child labour, including recruitment and use of child soldiers, and by 2025 end child labour in all its forms”.
The origins of the GSN come from the endeavours of the Joint Declaration of Religious Leaders signed on 2 December 2014. Religious leaders of various faiths gathered to work together “to defend the dignity and freedom of the human being against the extreme forms of the globalization of indifference, such as exploitation, forced labour, prostitution, human trafficking”.

Biden to speak on inflation, try to turn the tables on Republicans – The Washington Post

Biden to speak on inflation, try to turn the tables on Republicans - The Washington Post