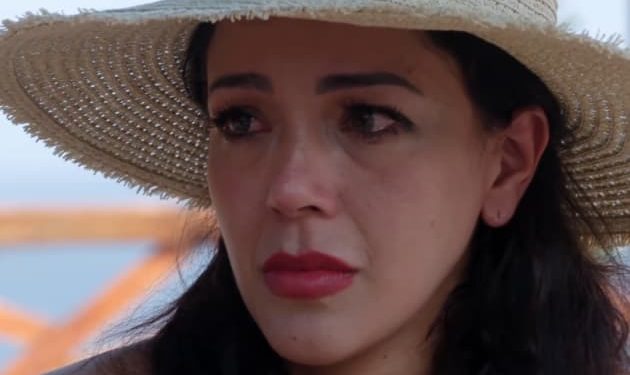 At the very end of Season 5, Episode 8, Jasmine Pineda confronted Gino Palazzolo over a major breach of trust.


Had he, she asked, sent her nude photos to another woman — to one of his exes, no less?


Gino awkwardly explains to the camera that he sent the photos as revenge, trying to brag about his new girlfriend.


It was a disaster. Most would consider this betrayal unforgivable, and Gino has no one to blame but himself.


On this sneak peek clip of Season 5, Episode 9, Gino Palazzolo is in for a reckoning.


Jasmine Pineda had asked him if he had sent his ex a naked photo of her.


She had unblocked the ex to investigate what she had sent, and Gino’s face said it all.


You know how some poker players have a “tell” when they are bluffing?


Gino has every tell. So many nervous ticks and anxious looks all at once.


As Jasmine looks through what she has been sent, Gino knows that he can’t get out of this.


“What? No, I’m sorry, I did not do that,” Gino tells Jasmine in the least convincing tone that we’ve ever heard.


Almost comically, he doubles down, adding: “That’s for darn sure I didn’t do that.”


Gino does not pass that persuasion check, suffice it to say.


“So, explain this to me because this is just a screenshot,” Jasmine says, surprisingly calmly.


“And,” she continues, “I have never sent these nudes to anyone, but just to you.”


Very reasonably, Jasmine begins to break down into tears as the humiliation and betrayal set in.


Realizing that weak denials aren’t getting him anywhere, Gino opts to confess.


“This was like — that was rubbing it in to her, yes,” Gino insists.


“I was showing her like ‘Look how hot my girlfriend is!'” Gino insists.


It is clear that, confronted with what he has done, he is hoping to put a positive spin on this transgression.


While conceivably this could be worse, he’s not making the situation any better.


“I trusted on you to send you those pictures, Gino,” Jasmine explains.


One should never have to explain to someone why this kind of betrayal is so heinous.


Gino is a grown man, not a child. He should know right and wrong.


“I will never be able to trust on you, ever,” Jasmine laments.


This of course gets to the second most important part of this discussion.


It’s not just that Gino hurt her — he also showed her that they might not have a future together.


When Jasmine sent him the photo of her, it was to entice him — and it was a sign of trust.


She trusted him with her nudes, hoping that he would respect her privacy and personhood.


Instead, Gino betrayed her by sending her nudes to another. His reasons don’t change that.


How can she trust him again?


If you give someone a key to your house and they sell one of your belongings, the damage is more than just the lost item.


You don’t trust them with the key to your house again — you also likely end the friendship.


Jasmine, distressed as she faces this same realization about their future, walks off.


She’s not yelling. She’s not screaming.


This time, she is sobbing, her heart broken by Gino.


The cameras do follow her, as she explains what Gino sent.


The photo in question was of her topless, meaning that Gino sent the photo of her bare breasts to his ex.


Interestingly, all signs seem to indicate that Gino and Jasmine somehow overcame this.


The hints suggest that they are still together and overcame this unthinkable problem somehow.


Perhaps we will understand more as the season continues.

Team USA medal tracker: Which events has the US won in Beijing?

Team USA medal tracker: Which events has the US won in Beijing?