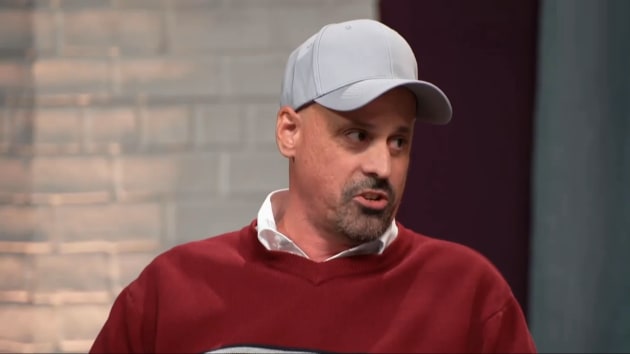 We heard a lot about Gino and Jasmine’s not-so-spicy sex life on Part 1 of the 90 Day Day Fiance: Before The 90 Days Tell All.


Things may be cool in the sheets, but on Part 2, we’ll see Gino in the hot seat for leaking Jasmine’s nudes.


Remember how he first denied it altogether, then apologized by saying that it was a stupid mistake, an error in judgment?


Now he’s walking that back, claiming that it was not a mistake, but an accident. Nobody’s buying it.


In this sneak peek clip, Gino Palazzolo presents his new recollection of events on the Tell All stage.


“It wasn’t nude pictures, plural,” he clarifies, insisting that it was only one topless photo.


Several people, including Mike Berk, are visibly astonished at this claim … which is contrary to what Jasmine is saying.


“So, this happened a couple of months after I met Jasmine,” Gino tells his castmates.


He says that this was “because I was excited about meeting Jasmine.”


In the understatement of the week, Gino reminds everyone: “Now my ex, she rubbed me the wrong way when we broke up.”


“And she was saying a lot of stuff to me about her new boyfriend and stuff,” Gino recalls.


“So, what this was was my immaturity,” he acknowledges.


“And trying to get back at her,” Gino continues, summarizing his motive: “Revenge.”


“Now what happened was, I selected a group of pictures on my phone,” Gino claims.


“And one of the pictures I accidentally sent,” he insists, “was a topless photo.”


This could potentially happen, yes, but it’s irresponsible with someone else’s photo, it’s messy to send anything like this to your ex, and it’s very different than past versions of the story.


“And it was one time, and it was meant to be a one-time thing only,” Gino repeats firmly.


The fact that he says it like this … really makes a lot of people wonder what else he’s hiding.


“There were three different pictures,” Jasmine reiterates, adding that Gino accompanied each of these photos with text messages.


If you select a bunch of photos and send them en masse, they don’t arrive with text messages between each pic.


(Don’t text mass photos like that — even if it’s your family vacation pics, it’s such a clumsy way to share things unless someone wants them sent that way)


If there were lines of text between each pic, that means that the photos were selected and sent individually … which is not what Gino is claiming.


Shaun Robinson then jumps in, trying to see if Gino is willing to directly call Jasmine is lying instead of just imply it with his denials.


Gino does that thing where he seems to shrink in on himself nervously, but just repeats the same claim again and again.


“And the problem is, Shaun, he never showed me his texts. I never saw it from Gino’s cell phone,” Jasmine laments.


Ella and Mike ask the obvious: if Gino is innocent, why didn’t he exonerate himself by showing Jasmine his original messages, from his phone?


“He deleted it scared, Ella,” Jasmine explains, disappointment in her voice.