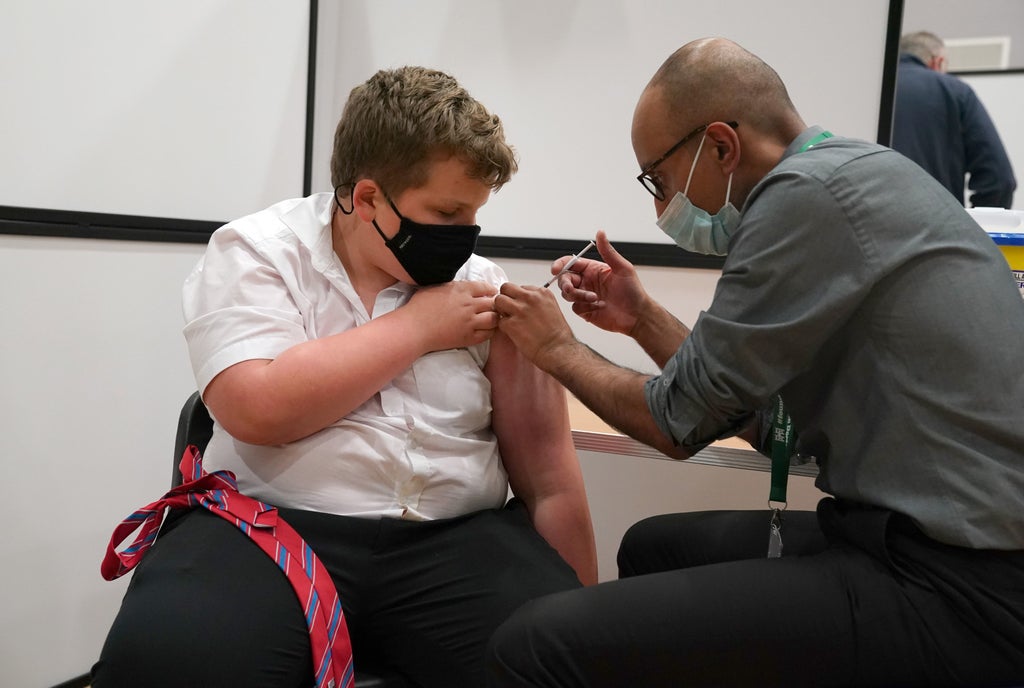 Young teenagers should be given a second Covid vaccination – as in most European countries – to curb a worrying surge in infections, Neil Ferguson says.

Case rates are rising most sharply in teenagers, but 12 to 15-year-olds will receive only a single dose of the Pfizer vaccine under current plans, the leading epidemiologist pointed out.

“Most other European countries are ahead of us in vaccinating teenagers and they are giving them two doses, not just one dose,” said Professor Ferguson, of Imperial College London.

“And we know that two doses really are needed to block infection and to prevent transmission.”

Prof Ferguson joined other leading scientists in calling for booster doses for older, at-risk people to be “accelerated”, as well as vaccination rates for teenagers.

Nearly 50,000 people tested positive for Covid in figures released on Monday and deaths are rising again to 869 in the last week, reported within the last 28 days.

The epidemiologist said the UK was being hit by waning immunity, both because many people were jabbed earlier than in other countries and because they received the slightly-less-effective AstraZeneca vaccine.

But he told BBC Radio 4: “We are not in same position as last year and I don’t think it’s a reason to panic right now.”

The government has ruled out a move to its ‘Plan B’ – vaccine passports for crowded venues and the return of mask-wearing and working-from-home – for the time being.

But Prof Ferguson said the “worst case” scenario is that the NHS struggles to cope over the winter and “something additional needs to be done”.

“There may be a Plan B that needs to be implemented that involves some rolling back of measures, but I doubt that it will get close to lockdown,” he said.

Under current rules, 16 and 17-year-olds are being given two doses, but the younger cohort will only receive a second if a medical condition puts them at higher risk.

The chief medical officers across the UK say that a second dose should not be considered for most 12 to 15-year-olds before the spring term.

But evidence suggests that a single jab cuts the risk of catching the more-virulent Delta variant of Covid by only about 55 per cent.

Furthermore, the rollout has been slow in England because the jabs are only being delivered in schools – not in clinics, or vaccination centres, as in Scotland and Wales.

Although parental consent is sought, under-16s who can prove they understand the risks and benefits can ask for the vaccine – or refuse it – if they disagree with their parents.

On the lack of Covid restrictions, Prof Ferguson added: “It’s notable, clearly, that most Western European countries have kept in place more control measures – vaccine mandates, mask-wearing mandates – and tend to have lower case numbers and certainly not case numbers which are going up as fast as we’ve got.

“But, at the end of the day, this is a policy decision for government to make.”

The best watch trends of 2021: green dials and diamonds

The best watch trends of 2021: green dials and diamonds