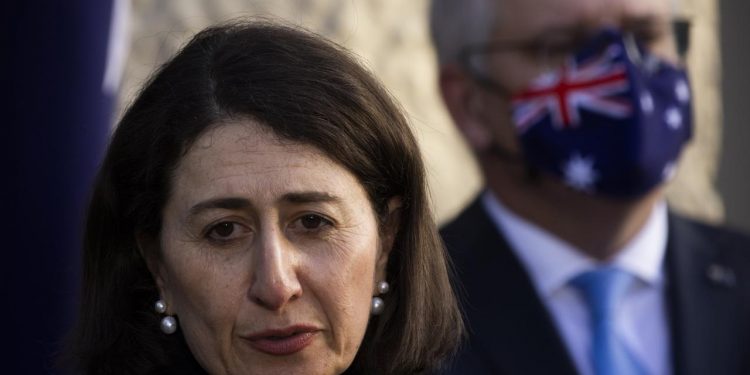 Prime Minister Scott Morrison’s claim that NSW Gladys Berejiklian never sent texts calling him a “horrible, horrible person” have been sensationally rebutted with the production of the full text exchange.

News.com.au has obtained the private text messages that outlines exactly what the former NSW Premier said to a mystery colleague that subsequently leaked the texts to Channel 10 journalist Peter Van Onselen.

Van Onselen said last night that the texts proved that the Prime Minister’s claim that the NSW Premier denied the claim were “an out and out lie”.

“The Prime Minister just told ABC 7.30 Gladys Berejiklian ‘denies’ the ‘horrible, horrible person’ text. That is an out and out lie,’’ he said.

Ms Berejiklian never categorically denied the exchange. She said she did not recall sending the message and praised the Prime Minister in a statement after the embarrassing leak.

The full exchange includes Ms Berejiklian saying: “Morrison is a horrible horrible person. He is actively spreading lies and briefing against me re the fires,’’ the text message reads.

The recipient of the text, which the Channel 10 political editor says was a cabinet minister, replies: “Morrison is about Morrison. Complete psycho. He is desperate and jealous. The mob have worked him out and he is a fraud.”

“I’ve been provided with a text message exchange between the former NSW premier and a current Liberal cabinet minister. I’ve got them right here,’’ he said.

“In one, she describes you as ‘a horrible, horrible person’, going on to say she did not trust you and you’re more concerned with politics than people,” van Onselen told the Prime Minister. “The minister is even more scathing, describing you as a ‘fraud’ and ‘a complete psycho’. Does this exchange surprise you? And what do you think that it tells us?”

Mr Morrison responded: “Well, I don’t know who you’re referring to or the basis of what you’ve put to me. But I obviously don’t agree with it, and I don’t think that is my record,” he said.

In a statement at the time, Ms Berejiklian did not categorically deny sending the text but said she did not recall it.

“I understand there has been some commentary today concerning myself and the PM. I have no recollection of such messages,’’ she said.

“Let me reiterate my very strong support for Prime Minister Morrison and all he is doing for our nation during these very challenging times.

“I also strongly believe he is the best person to lead our nation for years to come.”

“Which she denies by the way,’’ Mr Morrison interjected.

The moment came as Sales and ir Morrison traded barbs in an interview that began with a “rude” question – is the Prime Minister’s biggest problem staring at him in the mirror?

As the Prime Minister prepares to visit the Governor-General and call an election within days, the 7.30 host asked if the biggest threat to the government, given the economy was doing relatively well, was Scott Morrison’s unpopularity.

“Let me put it to you …that there can only be one factor that’s playing into the negative sentiment towards your coalition and that without sounding rude has to be you?,’’’ Sales said.

She then read a “long list” of people who said the Prime Minister was a bully, a liar and a “horrible, horrible person.”

In response, the Prime Minister said those attacking him were simply disgruntled for their own reasons.

“People are always disappointed and they’ll have an axe to grind. That’s normal in politics, particularly when you’re going into an election,’’ he said.

The Prime Minister then insisted he had always stood against the Liberal factions, prompting Sales to interject, “come on!.”

“I’ve never had time for the factional games in the Liberal Party. You get plenty of enemies,’’ he said.

“When you don’t let people bully their way into getting the outcomes that they want.”

Mr Morrison insisted he had intervened in the NSW preselection to protect the women on his team who faced challenges.

“Sussan Ley, one of my finest cabinet ministers and one of our most successful women in parliament, was under threat,’’ he said.

“She was under threat from factions within the Liberal Party and I stood up. I’m very serious.”

Earlier, the NSW MLC Catherine Cusack accused the Prime Minister of abandoning flood victims out of “pettiness” with the NSW Perrottet Government.

“Scott Morrison is practised at bullying and getting his own way,’’ she said.

“We are in the middle of a massive catastrophe here in the Northern Rivers. So outrageous, it’s just outrageous. It is so petty. He’s obviously not happy with the New South Wales Government.”