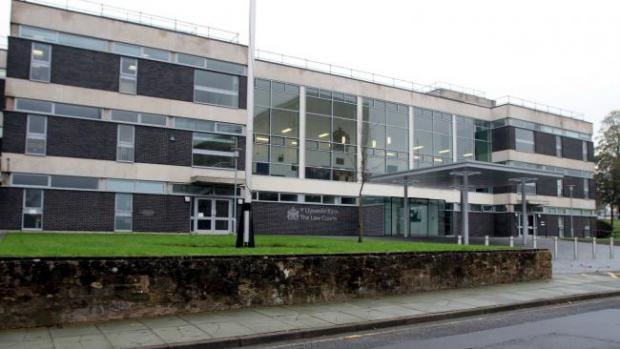 A “DEPRAVED” man has been jailed after he was caught engaging in graphic sexual chat about a nine-year-old girl online.

The 48-year-old had previously admitted attempting to incite a child to engage in sexual activity.

Simon Rogers, prosecuting, said Harkins created a discussion on an adult social media site calling for “mothers and daughters that like to share.”

His post was replied to by a woman who told him she had a nine-year-old daughter.

In the weeks which followed, Harkins struck up a conversation with the woman in which he made a series of sexual statements about what he would like to do with the nine-year-old, as well as sending numerous videos of him performing sex acts on himself while directly addressing sexual comments to the child.

He told her he was worried the chat was “a trap,” but went on to say said “incest turned him on” and he had been thinking about her child.

The mother sent a photo of herself and the child to Harkins – to which he replied in explicit terms that he wanted to have sex with her daughter and suggested they meet at a hotel.

READ MORE: Jade Ward’s parents speak about impact of murder on her family

The conversations continued and when Harkins turned again to the idea of meeting the woman and her daughter, he said he was worried that there would be “15 great big coppers” waiting to take him down.

In reality, he was in fact talking to an undercover police officer and when officers turned up at his home in October 2020 he was co-operative, but made out he knew nothing about the communications.

Officers found a mobile phone at the back of a drawer which, when forensically examined, was found to contain further messages between him and other adult consenting women.

They included a number of meetings to perform ‘rape roleplays’ the court heard.

Mark Connor, defending, said: “It is my submission that he is not an offender who was or is driven by a sexual desire or need to abuse children.

“Rather; a man whose addiction to sex in general terms and pushing the boundaries of sexual experimentation in relation to consenting adults, and more extreme forms of sexual activities, led him to this point.

“He posted a discussion on the site entitled ‘mothers and daughters that like to share’ – his intention was to provoke a response from adult participants.

“He wasn’t actively looking for children to abuse.

“The opportunity arose when he was exchanging messages and when she told him her daughter was only nine, that didn’t dissuade him from, it has to be said, enthusiastically going along with this sexual activity for which there is no excuse.”

READ MORE: Wrexham speeders among those fined by court this week

It was also said that while suggestions about meeting were made, no such bookings of any kind were found when police checked.

Judge Niclas Parry told Harkins: “For two months you indicated by your depraved conduct that you were prepared to use a child aged only nine for sexual gratification.”

He said the matter was aggravated by the fact that the child he thought he was speaking about was without parental protection – with the mother appearing to be willing to assist in his abuse of her.

He jailed Harkins for three years and four months, as well as making him subject to notification provisions and a sexual harm prevention order indefinitely.

'He's More Than Just a Coach to Me and Countless Others'