GoFundMe To Pay Off Harry & Meghan’s Home Scrubbed From Internet

A GoFundMe page offering to “help” Harry and Meghan pay off their $14.65 million Montecito mansion has been removed from the fundraising site.

California resident Anastasia Hanson, 56, turned to the crowdsourcing site — typically used to raise money for different causes or individuals who experienced tragedy, ran up major medical expenses or have other difficult life circumstances — in order to give “help” and “compassion” to the Duke and Duchess of Sussex, who came to California last year after severing ties with the Royal Family in England. 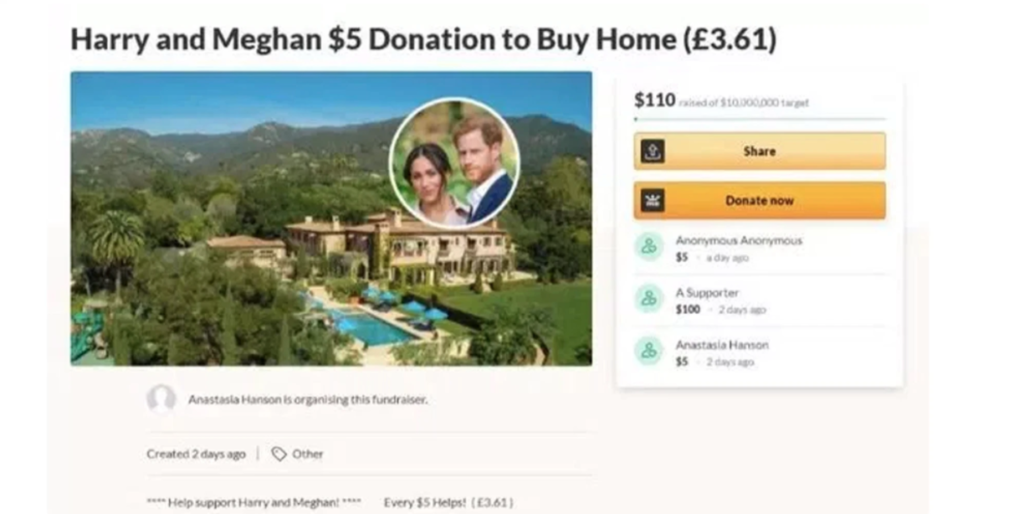 “They’ve stated that they’ve had a very rough time, so this fundraiser is a way to give help, compassion, and love by paying their home loan in full,” Hanson told The Sun.

Hanson asked those sympathetic to their situation to donate $5 toward Harry and Meghan’s home, an 18,000-square-foot mansion in Montecito that the couple bought in the summer of 2020. She had managed to raise only $110 ($5 that she gave herself, $100 from an anonymous donor and $5 from another anonymous donor) before the page was removed from GoFundMe. The link to the page currently reads “Campaign Not Found.”

As part of announcing that they would give up their royal titles at the start of 2020, Harry and Meghan also had to give up state funding and repay $3 million in taxpayer money used to refurbish their then-residence at Windsor Castle.

In a highly-publicized interview with Oprah Winfrey last week, Harry and Meghan revealed many of the reasons why they chose to build a new life in California. Some of the most shocking moments included Markle reporting feeling suicidal over not being accepted by the Royal Family and having a family member question whether the skin color of their child would be too dark due to her biracial heritage.

The interview was, Hanson said, what made her want to do something nice for the couple even if they have a net worth of millions and an estimated $100 million production deal with Netflix. GoFundMe did not immediately respond to a request for comment on the page removal.

“Were 2 million supporters to donate just $5 each, the Goal is met and the loan can be paid off,” Hanson wrote on the page. “After their interview, I was moved with compassion to help get their home paid off. As they are now financially independent, this will help and be a loving gift.”