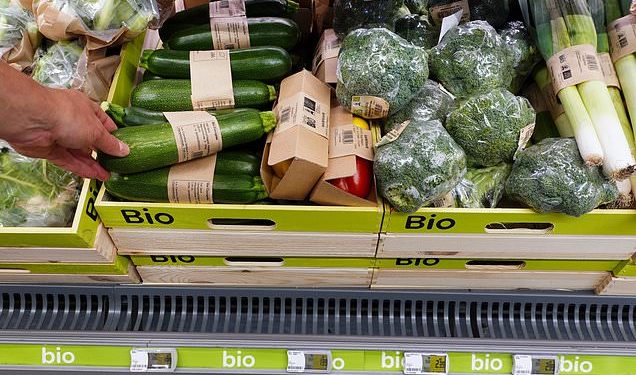 If you want to lose a stone just in time for summer — go vegan.

Researchers have found that, on average, overweight people who switch to a plant-based diet lose 1st 2lbs (7.4kg) in the first three months.

They believe the secret is not being able to eat fatty, calorie-dense foods like cheese and red meat — as well as limiting their takeaway options.

The study analysed the results of 11 scientific trials of vegan diets and weight loss involving almost 800 adults who were either overweight or had type 2 diabetes.

Some of the studies compared vegan diets to typical western diets, while others compared them with other fad diets like the Mediterranean diet. 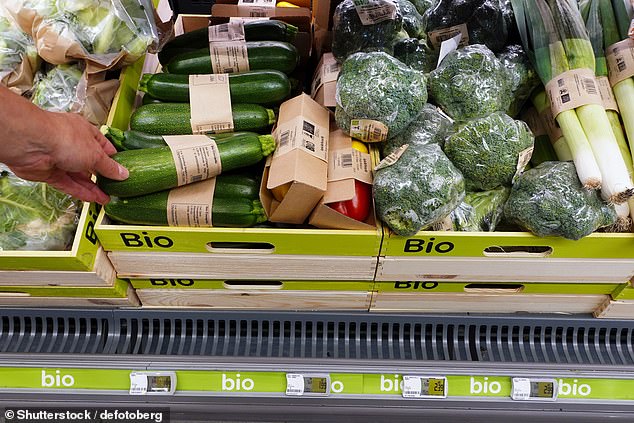 Vegan diets which forbid the consumption of animal products and instead opt for fruits, vegetables, nuts, legumes and seeds, have grown in popularity in Britain (stock image)

What are the downsides of going vegan?

Switching to a completely plant-based diet could leave you tired or breaking out in acne dieticians have warned.

Not eating or drinking animal products could leave you missing out on key vitamins like B12 as well as proteins.

A lack of vitamin B12, which is in found milk and eggs, can lead to fatigue or tiredness and negatively impact your mental health.

Vitamin D is another nutrient found mainly in animal products, like oily fish, that those on vegan diets can be deficient in.

A vitamin D deficiency can lead to issues with bone development and cause pain.

Not getting enough protein, which we get from dairy products, fish, eggs and meat can stunt growth in children and also lead to acne breakouts.

A lack of iron, found in red meat and liver, can lead to anaemia, causing people to feel tired and have heart palpitations.

Iodine, mainly found in seafood, is another nutrient known to be lacking in vegan diets and is important in maintaining a health metabolism.

Plant-based diets can include all of these mentioned nutrients but people need to carefully manage what they eat, or take supplements, to ensure they get enough.

This is especially true if people are switching to a vegan diet after primarily getting these nutrients from animal products.

But another risk is the false perception that vegan products are inherently healthier than non-vegan options.

A MailOnline analysis of meat-free vegan alternative foods found a significant number contained more salt, sugar and fat than the product they were meant to replace.

Compared to those who did not change their diet and continued eating meat and animal products, vegans lost 1st 2lbs (7.4kg) in 12 weeks.

However, a vegan diet did not significantly outperform these diets in terms of blood-sugar levels or cholesterol, with only very minor improvements noted.

Lead author Anne-Ditte Termannsen, from Copenhagen University Hospital, said: ‘This rigorous assessment of the best available evidence to date indicates with reasonable certainty that adhering to a vegan diet for at least 12 weeks may result in clinically meaningful weight loss and improve blood sugar levels, and therefore can be used in the management of overweight and type 2 diabetes.

‘Vegan diets likely lead to weight loss because they are associated with a reduced calorie intake due to a lower content of fat and higher content of dietary fibre,’ she said.

‘However, more evidence is needed regarding other cardiometabolic outcomes.’

UK experts have urged caution over the study, noting it has not been peer-reviewed and that people should consider some of the negative health risks of a vegan diet.

These include missing out on key nutrients found in animal products like vitamin D or B12, and iodine.

Another is the amount of sugar contained in some vegan foods which could be particularly risky for people trying to control their blood-sugar levels, such as diabetics.

Another limitation of the study was that none of the trials prescribed a specific control diet for participants not in the vegan arm of the study.

This means there are issues accurately comparing the impacts of the vegan diets.

Reacting to the study, Professor Gunter Kuhnle, an expert in nutrition from the University of Reading, said it did not actually demonstrate a specifically vegan diet helped people lose weight.

‘Vegan diets generally have less fat and more fibre than other diets and are often less energy dense,’ he said.

‘However, it is possible to achieve the same with a diet that is not exclusively plant based.

‘While this study provides very useful information for research, it does not suggest that adopting a vegan diet will automatically result in weight loss.’

Dr Duane Mellor, a dietitian from Aston University, also cautioned people about switching to veganism without considering some of the potential negative health consequences.

‘Cutting out a whole range of foods without thinking how nutrients are replaced, in the case of a vegan diet that includes nutrients such as vitamin D, vitamin B12, iron and iodine, can lead in the long term to worse health,’ he said.

‘It is also important to remember that not all vegan foods are healthy, after all sugar is vegan, and as more people choose a plant based diet, there are increasingly more foods which are highly processed which are being produced to see this demand.’

He urged people to speak to a health professional before switching to a vegan diet and specifically a dietician if they have a health condition like type 2 diabetes.

Being too fat is associated with a plethora of health problems, including the risk of musculoskeletal complications, type 2 diabetes, heart disease, and at least 13 types of cancer.

The latest NHS data for England published in 2019 found the majority of adults, 64 per cent, were either overweight or obese. Treating obesity-related illness is estimated to cost the NHS £6 billion a year.

And in the US an estimated 73.6 per cent of adults are considered either overweight or obese.

The analysis of vegan diets was presented at the European Congress on Obesity in Maastricht in The Netherlands.

Los Angeles Daily Covid Cases Top 3,000 For The First Time Since Mid-February, Up Nearly 300% In Past Month; Might Signal Sixth Wave – Deadline 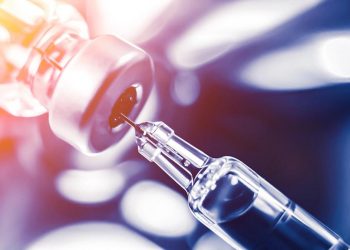 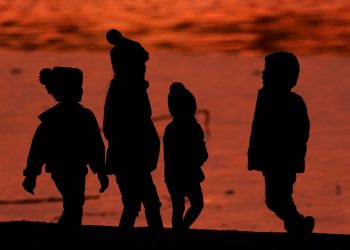 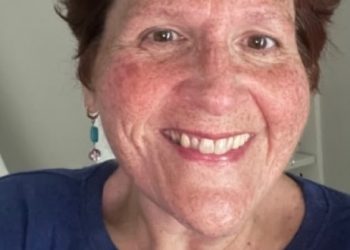 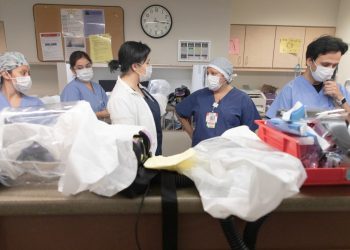