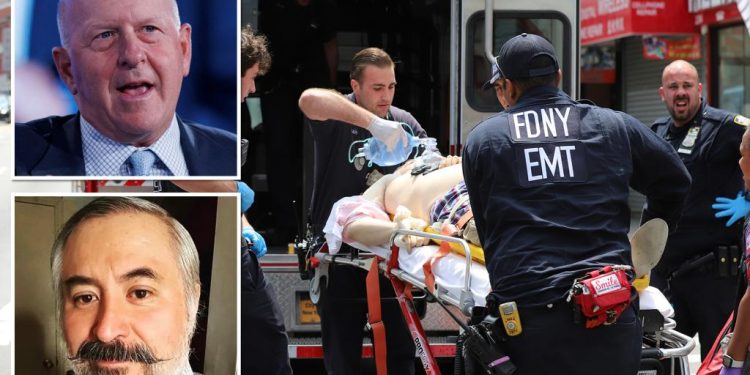 Goldman Sachs’ New York employees griped that they increasingly face becoming targets of violent crime during their commutes after a coworker at the megabank was tragically gunned down on the subway.

“Can Goldman lead the pack for banks on issuing Kevlar vests?” one fed-up Goldman banker wrote on the popular corporate message board Wall Street Oasis.

“Can’t wait for the new bulletproof Patagonia,” another quipped.

Dark wisecracking about the dangers of public transportation comes just weeks after the Wall Street giant slashed a slew of pandemic-era perks that included free Ubers to and from headquarters in lower Manhattan.

Some took aim at Goldman’s higher-ups, who last week were granted unlimited vacation days to “rest and recharge,” even as rank-and-file who have complained of 100-hour work weeks were granted two extra days off per year.

“Management pushing for a return to the office should have to take public transit in,” one user wrote.

Another suggested hitting “reply all” to a note that CEO David Solomon sent employees following the shooting and asking “DJ D-Sol if he will take the subway to work tomorrow?”

One still-more-jaded Wall Street analyst said, “Lol do you really think the C-suite care if a few people die on their way to work?”

Solomon briefly addressed the loss calling the loss of Daniel Enriquez — who had worked at Goldman’s Global Investment Research division and was brutally shot Sunday on a Manhattan bound Q train on his way to brunch — “devastating” and a “senseless tragedy” in a statement to bank employees Monday.

“Daniel Enriquez was a dedicated and beloved member of the Goldman Sachs family for nine years. He worked diligently to support our Macro Research team in New York and epitomized our culture of collaboration and excellence. We are devastated by this senseless tragedy and our deepest sympathies are with Dan’s family at this difficult time.”

Nevertheless, it was business as usual Monday at Goldman Sachs headquarters at 200 West Street, sources told The Post. Some employees saw a bizarre disconnect between Solomon’s underwhelming statement and the reality of what happened.

“It’s a packed office… spirits are pretty good generally,” a Goldman employee told The Post — and added it feels like any other Monday morning.

“There’s been no change in tone at all… there’s basically no discussion of it from management,” another employee chimed in.

The killing of Enriquez has increased pressure on CEOs who are attempting to bring workers back to the office. Just last week Mayor Eric Adams urged JPMorgan chief Jamie Dimon to ride the subway to work as he pushes to bring the city’s workers back to empty office buildings in Manhattan.

“The tragedy that occurred does further make one question Solomon’s decision to cut Uber perks while he increases his own pay,” Mark Moran, head of growth and operations at Litquidity, told The Post. “For someone who isn’t riding the subway daily to work, it’s easy to be removed from the realities that crime is up and his junior workers face more variables in their daily commute to Goldman than they did pre COVID.”

Kathy Wylde, president of Partnership for New York City, said crime continues to be a top reason employees are wary of returning to the office.

“This increases resistance to return to work… it’s something every New Yorker can identify with,” Wylde told The Post. “It reinforces concerns and pressure to ensure subways are safe.”

“An analyst who doesn’t want to come in has a pretty powerful retort now,” one banker who spoke on the condition of anonymity told The Post.