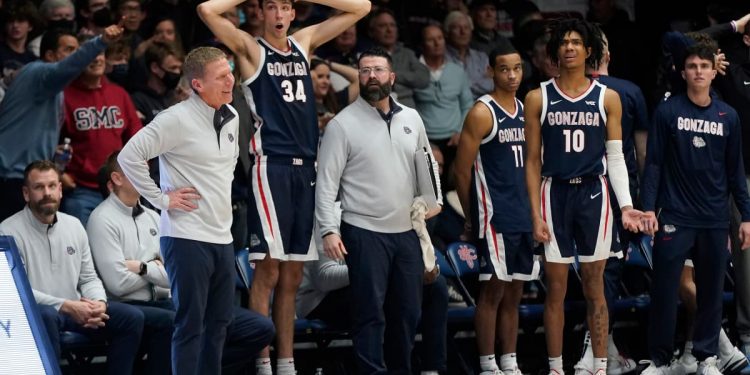 February 26, 2022 will go down as one of the most historic days in college basketball history.

In all, seven top-10 teams lost, including No. 9 Texas Tech (at TCU), setting a record for the most losses by the top 10 on a single day in NCAA history.

Aside from the Gaels’ 10-point victory, only two of those matchups ended with a double-digit margin of victory. The Colorado beat Arizona 79–63 for its first win over a top-2 team in 30 years while the reigning NCAA champion Bears toppled the Kansas, 80–70.

Meanwhile, the Spartans held off a late Boilermakers rally to win, 68–65; the Volunteers beat the Bruce Pearl’s Tigers, 67–62; and the Razorbacks, powered by JD Notae’s 30 points, beat John Calipari’s Wildcats, 75–73, despite a brilliant 30-point, 18-rebound performance by Oscar Tshiebwe.

In the nightcap, the Zags’ imposing frontcourt duo of Drew Timme and Chet Holmgren combined for just 12 points as the Gaels grinded their way to earning an emphatic win and a glorious court-storming to boot.

With so many unpredictable finishes this close to the end of the regular season, college basketball fans could be in for an extra dose of madness when the NCAA Tournament starts on March 15.