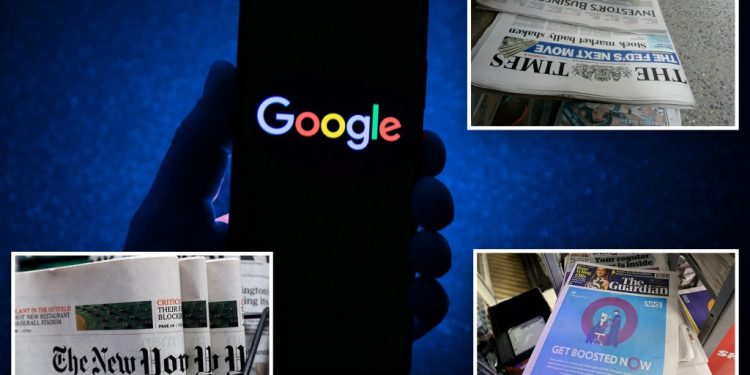 
Google was hit with an antitrust complaint from a coalition of publishers in the European Union on Friday, who argued that the company has “stranglehold” over the online ad market that threatens the news industry.

The European Publishers Council — which includes the CEOs of The New York Times, Axel Springer, News UK and Condé Nast — wrote that Google has established a grip over the online ad market by illegally stifling competition.

The group urged the European Commission “to take concrete steps right now that will actually break the stranglehold that Google has over us all.”

“The stakes are too high, particularly for the future viability of funding a free and pluralistic press,” European Publishers Council chairman Christian van Thillo said in a statement.

The group that filed the complaint also includes the CEOs of The Guardian and News UK — which owns the Times of London and The Sun and shares the same parent company as The New York Post — as well as several non-English language publications.

Google, which took in a whopping $147 billion in ad revenue in 2020, did not immediately respond to a request for comment.

The complaint’s substance bears a striking resemblance to a Texas-led lawsuit filed against Google in the US. Both complaints say that Google occupies the roles of buyer, seller and middleman in the online ad market. They say that position has unfairly taken money out of the pockets of publishers and threatens the financial viability of many news organizations.

Both the Texas suit and the publishers’ complaint quote an unnamed Google employee as comparing the company’s position to a situation similar to one in which Goldman Sachs or Citibank owned the New York Stock Exchange.

“Google’s ad tech suite is rife with conflicts of interests, as Google represents the buyer and the seller in the same transaction, while also operating the auction house in the middle,” the publishers said on Friday. “Far from managing its conflicts, Google has time and again taken advantage of its position to prioritize its own interests at the expense of the very customers it is supposed to serve, safe in the knowledge that the latter cannot react, locked as they are in Google’s product.”

The publishers urged the European Union — which opened an antitrust investigation into Google’s ad business in June — to impose “effective remedies that will restore competition in ad tech, to the benefit of European press publishers, marketers and consumers.”

Previous EU probes have already resulted in a whopping $9.8 billion in fines since 2018.