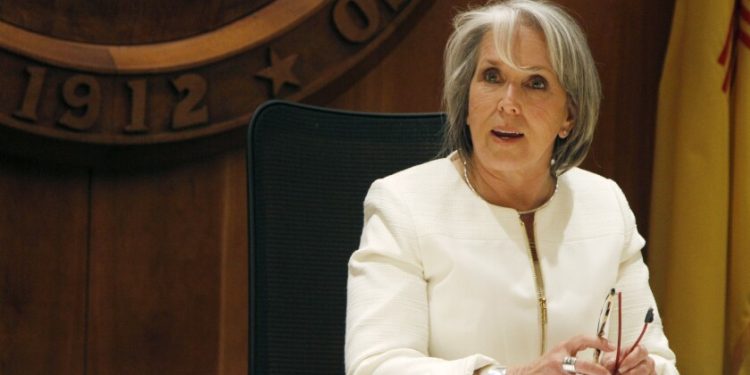 In a new campaign ad, the Republican candidate for New Mexico governor looks straight into the camera and speaks, in a voice of patience and reason, about his support for abortion during the first 15 weeks of pregnancy. It’s a shift from his previous stance.

“I believe we can all come together on a policy that reflects our shared values,” said Ronchetti, who is seen in the final frames strolling amiably with his wife and two daughters. “We can end late-term abortion while protecting access to contraception and healthcare.”

The Supreme Court decision overturning Roe vs. Wade and making abortion illegal in much of the country has introduced a sudden uncertainty into November’s midterm election, which once seemed likely to end in a Republican romp.

But Democrats hope the ruling, capping a 50-year conservative crusade, will energize their base, unsettle independent voters and turn the political focus away from the onus of runaway inflation, high gas prices and doubts about President Biden’s leadership.

Republicans, fearing the same, have hit on a way — exemplified by Ronchetti’s ad this week — to try to take the offense on abortion or, at least, render the issue somewhat less potent. The strategy is to reach for the middle ground while painting Democrats as extremists who support abortion without limit.

New Mexico used to be a highly competitive swing state. But in the last 20 years or so, it became a Democratic stronghold.

Gov. Michelle Lujan Grisham was elected in a 2018 landslide and her party enjoys big majorities in the Roundhouse, as the Legislature — which meets in the country’s only circular Capitol — is known.

But in a sign of how much the political climate has soured for Democrats, Grisham is facing a significant reelection challenge from Ronchetti, a well-known face from his days on Albuquerque television and a 2020 bid for U.S. Senate.

Some of the difficulty is Grisham’s doing, a result of scandals involving her personal use of public funds and a sexual harassment settlement she paid to a former staffer. But much of her vulnerability arises from issues like crime, the economy and Biden’s drag on Democrats across the country.

Last month’s Supreme Court ruling may have offered a lifeline of sorts.

New Mexico is one of most permissive states in the country when it comes to abortion, allowing the procedure throughout pregnancy without restriction. Even before Roe vs. Wade was overturned, it was a magnet for patients denied treatment elsewhere.

This week, a group tied to the Democratic Governors Assn. placed a TV spot citing Ronchetti’s support for the Supreme Court’s decision and noting the role governors will play setting abortion policies now that the issue has been returned to states to decide.

“Extremists who’d outlaw abortion even in cases of rape and incest said he’s their choice for New Mexico, which makes Ronchetti the wrong choice for governor,” a narrator says.

The Republican quickly fired back with his own spot backing off his earlier position — “Life should be protected at all stages,” Ronchetti once said — and suggesting Grisham is the one with radical views.

(Asked if the governor favored any limits, a campaign spokeswoman responded with generalities about Grisham’s defense of abortion rights.)

Republicans running in other blue and purple states, where abortion rights are generally favored, are likely to adopt strategies similar to the one Ronchetti embraced.

That’s because repeated polls have shown most voters to be more ambivalent about abortion than the zealotry around the issue suggests. While a majority supports the right to legalized abortion — and most disapproved of the decision overturning Roe — a substantial plurality expresses support for restrictions on the procedure, such as a ban after the first trimester of pregnancy.

Those are the voters Ronchetti is speaking to in an advertisement that is evidently the first of its kind in the country. It probably won’t be the last between now and November.

“What you’re seeing in New Mexico is an example of Republicans not being afraid to point out where they believe Democrats have overreached,” said a national GOP strategist, who did not want to be quoted speaking for Ronchetti’s campaign. “If Democrats want to confront them on the issue, they’re not going to cede, they’re not going to back down from the conversation.”

Abortion won’t ever be a preferred issue for the GOP in places like New Mexico, California, Colorado or others where abortion rights are deeply enshrined. And Republicans could muddle their message by promoting drastic steps like a nationwide ban on abortion.

But shifting the debate from whether abortion should be legal to whether it should be limited is far more favorable political terrain for Republicans running in the first national election after the end of Roe.

And if it seems as though all politicians are doing is pointing fingers — “Democrats accuse Ronchetti of being extreme, Republicans accuse Grisham of being extreme, TV ads do their spinning,” as New Mexico pollster Brian Sanderoff put it — voters just might decide to focus on other issues. Like, say, gas prices or fears of a recession.

Then Democrats are probably in for the walloping they’re desperate to avoid.

Nissan Leaf will be ditched in favor of a new EV, insiders say