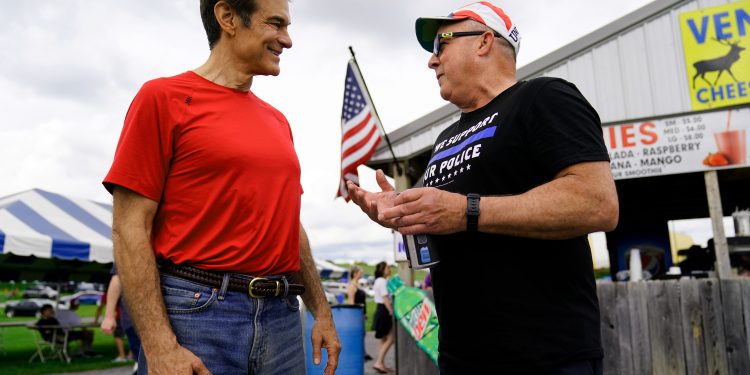 Trump endorsed Mastriano to carry the party’s banner in the governor’s race — but the new nominee is facing a revolt among Republicans who think he’s going to lose the general election and potentially damage the party in other ways.

The primaries are illustrating just how deep Trump’s power over the Republican Party goes, as well as whether a decisive portion of the MAGA movement has moved past the former president, elevating candidates in the mold of Trump that may not have his blessing — like Barnette. Trump also endorsed against the incumbent governor in Idaho — where his candidate could very well lose — along with a number of downballot candidates.

And while Fetterman glided to the Democratic Senate nomination in Pennsylvania and Attorney General Josh Shapiro was unopposed for the Democratic gubernatorial nod, there are Democratic battles lined up across Tuesday’s primary map. A series of expensive proxy battles broke out over the last month between outside groups aligned with progressive Democrats and more moderate candidates in safely Democratic House seats.

Your guide to the May 17 primaries

What you should really be watching

Kathy Barnette’s late surge in the GOP Senate primary sent MAGA world scrambling. Plus, Republicans there are freaking out about frontrunner Doug Mastriano possibly winning the party’s nomination for governor.

Oz may have Trump’s blessing in the Senate race, but polling conducted in recent days has shown Oz and Barnette locked in a dead heat.

Trump’s gamble on endorsing Oz despite trailing McCormick in most polls at the time shows Trump’s belief in the power of the celebrity candidate — even one who is relatively polarizing, with nearly evenly split favorable and unfavorable ratings. The former president has repeatedly pointed to Oz’s 18-year stint on television, including during a robocall to Pennsylvania GOP voters on Monday, as a sign of Oz’s appeal.

While the race remained tight, Trump in recent days criticized both McCormick and Barnette — McCormick for being an “insider who absolutely sold us out to China,” he told listeners on the call Monday, and Barnette for supporting in 2020 the creation of a statue honoring the Obama family.

Fetterman, who occupies the progressive lane of the party, won the Democratic Senate nomination over Rep. Conor Lamb, who has a more centrist record. Fetterman on Tuesday cast an emergency absentee ballot from his hospital room, where he continues to receive treatment after suffering a stroke on Friday.

Pennsylvania will be one of the nation’s top battlegrounds this fall as Republicans seek to hold onto the seat of retiring Sen. Pat Toomey and tip the 50-50 Senate their way.

GOP concerns about Mastriano in the governor’s race are even stronger. He led all of the recent polls in the splintered field that also includes former Rep. Lou Barletta, former U.S. Attorney Bill McSwain and businessman Dave White, among others.

Republicans, both in the state and nationally, believe that Mastriano could cost the party a shot at a competitive open seat. A last-ditch effort to try to consolidate opposition to him materialized last week, but it quickly fizzled after none of the leading candidates dropped out — and Trump endorsed Mastriano over the weekend.

Budd captured the Senate nomination easily and quickly Tuesday night. But Trump’s endorsement of Budd last year in the North Carolina Republican Senate primary wasn’t as immediately powerful as his Oz announcement five weeks before the Pennsylvania primary — or an even shorter window for J.D. Vance, who won the GOP Senate nomination in Ohio May 3.

Budd struggled for months to surpass former Gov. Pat McCrory’s lead. Trump and David McIntosh, president of the Club for Growth, even tried to broker a deal with former Rep. Mark Walker — another Republican in the race — to withdraw and run for House instead, believing Walker was taking support from Budd.

Walker remained in the running until the end, but Budd finally took the GOP lead in late March, buoyed by the Club for Growth’s record spending. His rise in the polls coincided with Trump’s rally in the state in early April, and has continued to grow since.

Budd will face Democrat Cheri Beasley, a former chief state Supreme Court justice who has coasted in recent months after her two main primary rivals dropped out of the race.

While North Carolina has trended red in recent years and is not one of Democrats’ top priorities in the fight for Senate control, the state remains competitive. Top Republican outside spending groups have already reserved millions of dollars in ad time for the race to succeed retiring GOP Sen. Richard Burr.

Other statewide contests to watch: Idaho and Oregon

Tuesday’s primary elections in Idaho are the most important elections of the year in the state, where the eventual Republican nominees will become the de facto general election winners in the ruby red state.

There, it is a clash between the two wings of the Republican Party, the conservative but generally business-aligned wing, and a far-right insurgent branch of the GOP.

The contests in the state are headlined by Lt. Gov. Janice McGeachin’s primary challenge to Gov. Brad Little. McGeachin, who has ties to the far right and spoke at a conference hosted by a white nationalist, also has the backing of Trump in her bid to unseat Little.

Other contests down the ballot in the state have a stark divide: The state’s longtime attorney general, Lawrence Wasden, is facing a primary from former congressional rabblerouser Raúl Labrador. And the state’s secretary of state contest has candidates who have said they don’t believe President Joe Biden was legitimately elected president.

In Oregon, Democratic Gov. Kate Brown is term-limited. The Democratic nomination will likely come down to either former state House Speaker Tina Kotek or state Treasurer Tobias Read, after former New York Times columnist Nicholas Kristof’s headline-grabbing campaign was disqualified because he did not meet the state’s residency requirement.

The Republican field is a crowded contest with no clear front-runner. While not among the top tier of gubernatorial contests this year, it could become competitive if the political environment remains horrible for Democrats and Republicans nominate a candidate that can appeal to some voters in the blue-leaning state. A wild card in the race is Betsy Johnson, a former conservative Democratic state senator who is running as an independent candidate in the fall.

Cawthorn, Simpson and Schrader are all staring down primary challengers on Tuesday night.

Schrader, a longtime Blue Dog Democrat, is facing a progressive Jamie McLeod-Skinner. Much of Schrader’s seat is new thanks to redistricting. And he placed a target on his back because the left believes he and several other moderate House Democrats united to tank Biden’s massive social spending plan.

Schrader allies have warned the party could struggle to keep the district in the fall if a McLeod-Skinner prevails. Biden carried it by 9 points in 2020.

Cawthorn, though, has grabbed the most headlines. Besieged by a flood of scandals, Cawthorn has become estranged from former allies in his western North Carolina district and in the Capitol. His notoriety drew a large group of challengers into his primary, but the most formidable is Edwards. Even Sen. Thom Tillis (R-N.C.) has lined up against the incumbent.

Another North Carolina battle to watch: whether Bo Hines, a one-time Cawthorn acolyte who has since distanced himself, prevails in an open district. Democrats appear on track to nominate state Sen. Wiley Nickel. Biden carried the district narrowly.

In Idaho, Simpson is locked in a 2014 rematch with Bryan Smith, a lawyer and businessman running to the incumbent’s right. Simpson has framed the race as a test for the GOP’s governing coalition and warned that his opponent will be loath to compromise and obstruct the party’s attempt to legislate.

Progressive candidates are vying for open safe blue seats in southwest Pennsylvania and north-central North Carolina — but outside groups aligned with cryptocurrency financiers and pro-Israel groups have united to block them.

In retiring Rep. Mike Doyle’s Pittsburgh district, AIPAC’s super PAC has spent nearly $2 million in TV ads to block state Rep. Summer Lee. Their preferred candidate is lawyer Steve Irwin, touting him as someone “who will work with fellow Democrats.”

In North Carolina, those forces united to push state Sen. Val Foushee to victory in her open-seat primary against Durham County Commissioner Nida Allam, the first Muslim woman elected to public office in the state

In another open-seat race, state Sen. Don Davis, the Democratic winner, has been the beneficiary of spending from the AIPAC super PAC and another aligned group.

A less ideological — but even more expensive — battle is raging in an open new seat in Oregon, where Protect Our Future, a super PAC backed by crypto billionaire Sam Bankman-Fried, has dumped in money to boost first-time candidate Carrick Flynn in a crowded primary.

More coverage on the May 17 primaries

Democrats also picked a candidate in a deep-blue corner of Kentucky to replace the retiring Rep. John Yarmuth. State Sen. Morgan McGarvey easily won with the support of both Yarmuth and Protect Our Future.