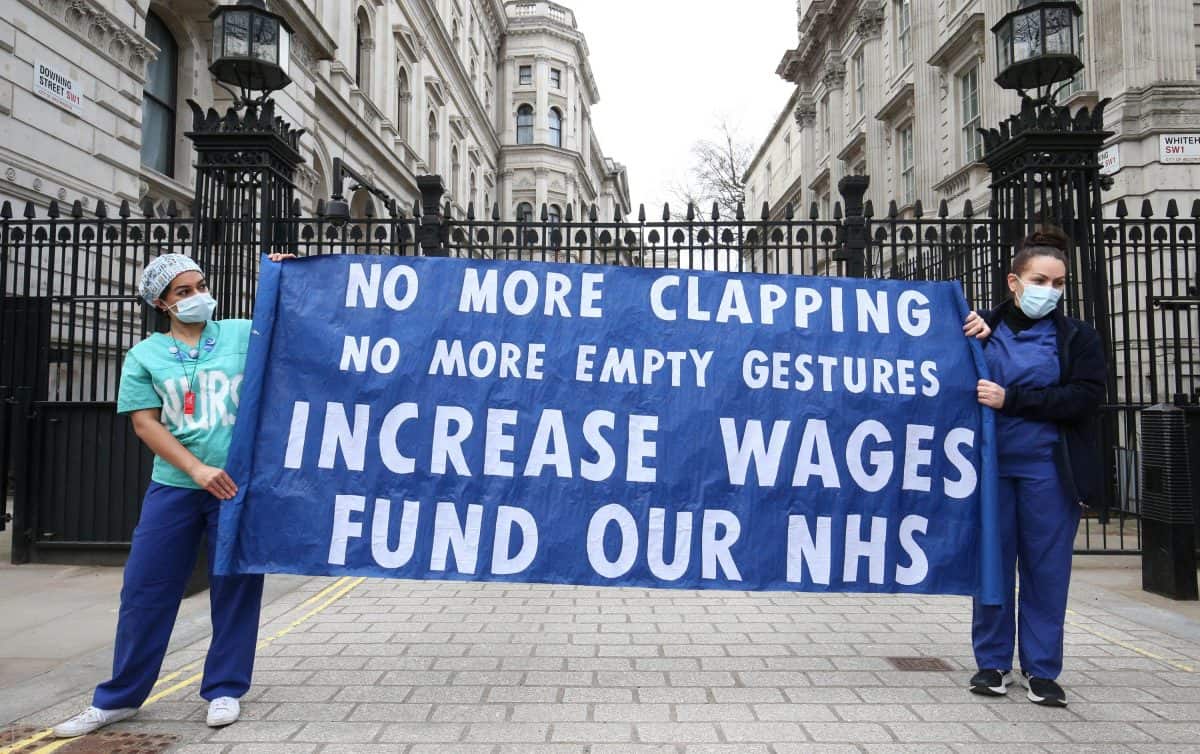 The government has come under attack for failing to announce an expected pay rise for NHS staff in England.

Unions representing NHS workers had been set to react to confirmation of a three per cent increase following months of delay.

But Health Minister Helen Whately made no mention of pay during her initial speech to the House of Commons on Wednesday.

The government was already under attack for recommending a 1 per cent pay rise despite the incredible pressure NHS staff have been under because of the pandemic.

Shadow health minister Dr Rosena Allin-Khan criticised the minister for failing to announce a pay rise, saying the government’s reaction to a recommendation from the NHS Pay Review Body (PRB) had “turned out to be nothing”.

Unions expressed anger and dismay at the lack of a decision on pay after stepping up their campaigns in recent weeks for the overdue increase to be paid.

Rachel Harrison, national officer of the GMB, said: “This is completely outrageous – virtually the last day of Parliament and the government has insulted hard-working NHS workers once again by staying silent.

“NHS staff have put themselves in harm’s way throughout the pandemic and, as a health union, we cannot accept MPs swanning off on holiday leaving health workers in limbo.

“GMB has today written to the prime minister and health secretary to demand they intervene and set out their response on NHS pay before the summer recess.”

Pat Cullen, interim general secretary of the Royal College of Nursing, said: “This treatment of our NHS workers is shameful. Ministers are holding them in contempt and we have no choice but to condemn this behaviour.

“With tens of thousands of nursing vacancies and thousands more considering their future in the profession, the government is sending the worst possible signal with this political gameplaying.

“Ministers need to stop the wrangling and come clean about the pay rise they believe NHS staff deserve. Nursing staff will only accept this pay award if it’s significant, consolidated and fully funded with additional monies.”

Unison general secretary Christina McAnea said: “The government has behaved disgracefully towards NHS staff today. Health workers are on the cusp of another wave of the deadly virus and have already been through so much. They’ve been treated shabbily.

“Just as NHS staff thought ministers were at last to announce the pay rise they’ve more than earned, hopes have been cruelly dashed.

“The government has led health workers a merry dance. Ministers should hang their heads in shame and get a much-needed grip.

“Scottish NHS workers are already spending their pay rise that’s been backdated to December. The independent NHS pay review body report was delivered to the Prime Minister weeks ago and it’s more than 100 days since health staff in the rest of the UK were due a pay boost.

“This delay is unacceptable and could backfire badly. Many staff are ready to quit but held on in the hope the government would show it does truly value them.

“Now they may walk just when the public needs them the most. If that happens, the government will have no-one to blame but itself.”

California COVID vaccinations up as delta surges — but is it enough?