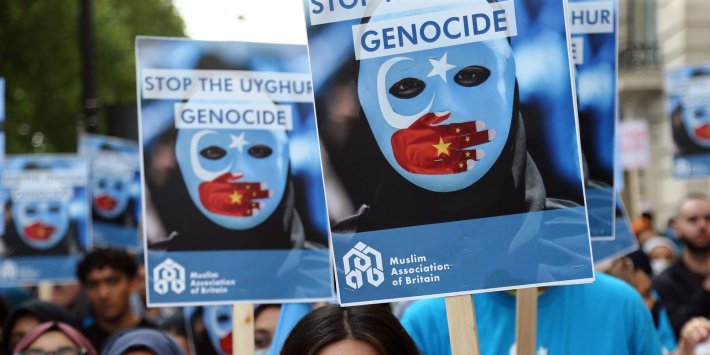 An amendment to the Health and Care Bill, seeking to ban the Department of Health from procuring medical equipment made in regions of the world at “serious risk of genocide” is believed to be causing unease within government.

The amendment, which has already passed through the House of Lords, would have the likely effect of banning the NHS from buying health equipment made in the Chinese province of Xinjiang, where a genocide against the Uighur minority is argued to be taking place.

PoliticsHome understands there is a belief that the health secretary is concerned by the “prospect of defeat and embarrassment” from cross-party coalition of MPs supportive of the amendment, including former minister Nus Ghani and former Conservative Party leader Sir Iain Duncan Smith.

“The government is clearly spooked,” a source close to the campaign to boycott Xinjiang told PoliticsHome.

“Sajid doesn’t want to be embarrassed over this,” they added.

Last year the Department for Health and Social Care spent hundreds of millions of pounds procuring medical equipment from firms based in, linked to or operated by Chinese companies.

In September 2021, Shenzhen-based company Winner Medical was awarded a £17 million contract to supply the UK with PPE. Earlier in January, US medical firm Innova received £800 million to supply Lateral Flow Tests made by the Chinese company Biotime Biotechnology.

“The amendment is important because the government should be leading the way and not buying any goods that could possibly be made by forced labor, slave labor or child labour,” Duncan Smith told PoliticsHome.

“The amendment is to stop government doing it,” the former Tory leader added.

“We are insisting now that supply chains, the end product, cannot be disguised by what goes on in its supply chain.”

PoliticsHome understands that ministers have been open to negotiating the contents of the amendment, which was jointly tabled by Lord Blencathra, Baroness Kennedy QC, Baroness Smith and Lord Alton.

However, the Foreign, Commonwealth and Development office is allegedly “vetoing use of the word genocide”.

An insider told PoliticsHome that they “aren’t sure why” FCDO is pushing back on the wording “given the fact that all the amendment requires is for the government to do a risk assessment” and “is consistent with current UK policy”.

Alongside forcing mass divestment from China in relation to healthcare, the amendment could have the secondary, even larger implication of creating a process through which the government would be forced to assess regions across the globe for “serious risk of genocide” and publicise their findings.

Under the UN Convention on the Prevention and Punishment of the Crime of Genocide, of which the UK is a signatory, if government finds a serious risk of genocide to be occurring in any state, it becomes duty bound to take whatever action is necessary to deter it.

Last month the London-based independent Uighur Tribunal, chaired by British lawyer Geoffrey Nice, ruled that the Chinese state is guilty of crimes against humanity and genocide through coercive birth control. As such, it is highly possible that a government assessment of the issue would conclude that at least a “serious risk” of genocide in Xinjiang is taking place.

“So much depends on whether Sajid is willing to stand his ground,” the insider said.

A government spokesperson said: “We are taking robust action to ensure that no UK organisation, public or private, is complicit in human rights violations, and we expect all suppliers to the NHS to follow the highest legal and ethical standards.”