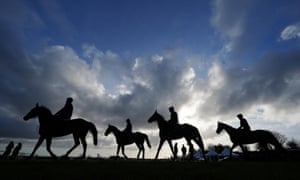 
Good morning from Aintree, where a sell-out crowd of 70,000 is steadily assembling – for the first time in three years – to watch 40 horses tackle the most famous obstacles in jump racing. The race that makes the world sit up and take notice is now just hours away.

When you are used to seeing images of the packed grandstands at Cheltenham or Aintree, it is easy to forget that racing over fences is, for the most part, very much a north-west European thing. It’s big in Britain, Ireland and France, but not even on the radar in Australia or the United States, where Flat racing is the only game in town.

But the Grand National cuts through. It has global “reach”, as Rachael Blackmore, last year’s winning jockey, put it this week, while discussing the fan mail she has received from around the world after her history-making victory on Minella Times 12 months ago.

A worldwide television audience of 500 million has been bandied about this week, which can only be a guesstimate but may not be too far off the mark. And William Hill reported a few years ago that they expected to take Grand National bets from 140 countries, another sign of the appetite for steeplechasing’s most famous race in every corner of the globe.

The crazy uncertainty helps. You can come to the National completely cold and have almost as much chance of finding the winner as the form book bores. There is nothing like it, anywhere on Planet Earth, and this afternoon’s winner will join the most storied roll of honour in racing.

This year’s race is as open as any for years, with Minella Times and Blackmore edging to the top of the market at 10-1 overnight, and no fewer than nine other horses shorter than 20-1. When a horse with the proven talent of Samcro, a Grade One winner both over hurdles and fences, is 30th in the list at around 80-1, you can be sure that this is a race where almost anything is possible.

Any one of half a dozen could end up at the top of the market by race time at 5.15pm, however, with Any Second Now, Delta Work and Snow Leopardess all popular at 11-1 and Eclair Surf, who was not guaranteed to run until the final declarations on Thursday morning, is a 14-1 chance. There could also be money for Longhouse Poet as the afternoon goes on, given his trainer Martin Brassil’s remarkable 1-6-3 record with his only three runners in the race to date.

It is a bright, sunny and distinctly chilly day in the north-west, just as it was on Friday, and that persuaded Sulekha Varma, the clerk of the course, to put 5mm of water onto the Grand National course overnight and 3mm onto the hurdle and Mildmay courses, which stage the remainder of today’s seven races.

The action gets underway at 1.45pm, when Blackmore, who was unseated from her first ride of the week over the National fences on Friday, will ride Emitom, her only other mount on the card. A full guide to all the Grand National runners is here, some thoughts on the big race and the rest of the ITV Racing action are here, and you will find all the news, results and much, much more here on the blog as the day unfolds. Happy Grand National!